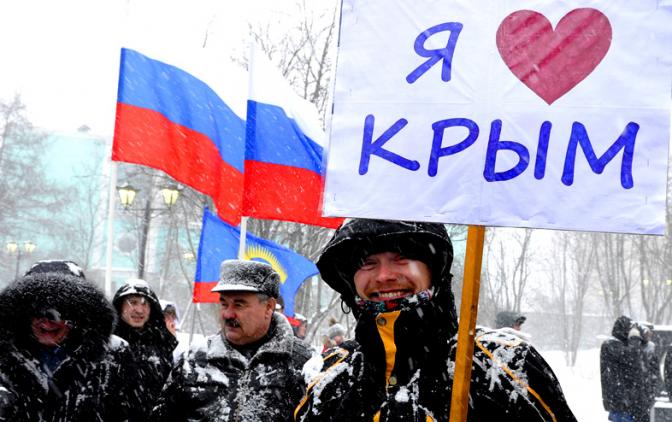 With the passing of time, the euphoria with which Russians greeted the Crimean Anschluss has weakened, a process that has been intensified by declines in standard of living and that has left public attitudes about the regime more negative than they were even before Vladimir Putin seized the Ukrainian peninsula.

Indeed, a study by the Levada Center, says that “assessments of the activity of the government are today almost 20 points lower than they were at the end of 2014,” a change that helps explain the growth of various kinds of protests and the increasing fraction of Russians who say rate personal interests above the state’s (levada.ru/2017/03/27/krym-ne-rabotaet/).

Andrey Polunin of Svobodnaya pressa asks two Moscow commentators to assess these results. Aleksey Grazhdankin, the deputy director of the Levada Center, says that the falloff in the Crimean effect does not mean that “dissatisfaction with the government” is as great as it was in 2013. In that sense, the impact of that event still matters (svpressa.ru/society/article/169665/).

The sociologist adds that this shows that “the effect of 2014” was not about Crimea alone but rather “a combined reaction to the Maidan” and the annexation of the peninsula but even more “a reaction to the harsh policy of the West toward the Russian Federation which mobilized Russian society to a greater extent.” That impact “has not exhausted itself.”

“A large part of the population even now supposes that when they are defending the Russian authorities, they are defending Russia and the interests of the country,” Grazhdankin suggests. And that in turn means that that “the further weakening of ‘the Crimea effect’ will not necessarily lead to protests.”

Sergey Markov, director of the Moscow Institute for Political Research, agrees. He argues that “the Crimea effect is one of the most important indicators of the domestic political situation in the Russian Federation. But one must understand: ‘the post-Crimean consensus’ is based not only on th positions of citizens concerning the re-unification of Crimea.”

Instead, Markov says, “the essence of this consensus is more fundamental. It consists in the fact that in the opinion of the majority of residents of the Russian Federation, the country is in a state of hybrid war with a large Western coalition … and that in these conditions citizens must reduce their demands on the state and increase their assistance to it.”

As a result, there has taken place “a deep freezing of domestic political problems,” the longtime Moscow commentator says. But “now, the clash with the West has begun to weaken and the frozen dissatisfaction has begun to thaw a little. And this is logical,” Markov argues, because “once a threat to the country is reduced, why put up with things any longer?”

If Western sanctions were lifted, he suggests, there would be “new mass protests,” the result of the fact that “in Russia now there are no effective political channels for diverting protest attitudes.” Indeed, Markov says, Russia’s existing “sharp opposition deficit” carries with it “risks” for the regime and the country.

To counter this trend, the commentator concludes, the Kremlin can “intensify its conflict with the West.” But at the moment, whether it will do so remains an “open” question. “All the same, enormous segments of the Russian elite – the so-called hidden opposition – literally are praying for the lifting of sanctions.”