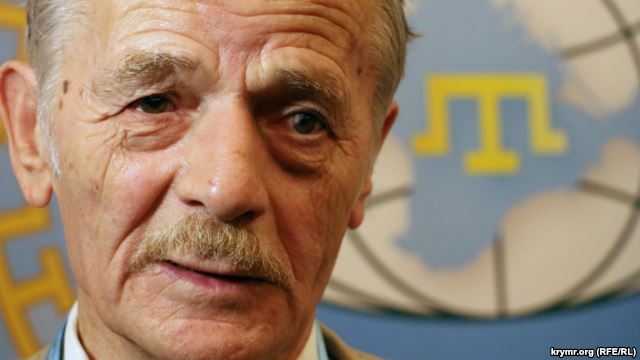 Rustem Mennanov has become the latest Crimean Tatar to be fined or jailed for innocuous social network posts.  Such prosecutions are often pretexts for persecution, but also a form of intimidation and warning that even posts from years before Russia’s invasion of Crimea will be used for repressive purposes.

Mennanov was fined on June 1 by a Crimean court under Russian occupation for mentioning the Mejlis [self-governing body] of the Crimean Tatar people in a birthday greeting to Mustafa Dzhemilev.  Since the veteran Crimean Tatar leader and former Soviet political prisoner, was also, until 2013, the head of the Mejlis, mention of this is hardly surprising.  Russia is ignoring a direct order from the International Court of Justice to end its persecution of the Mejlis which it banned in April 2016, two years after it banished Dzhemiliev and the current head of the Mejlis Refat Chubarov from their homeland.

The Crimean Tatar activist plans to appeal against the ruling.   He was represented by Fevzi Karakash whose application to have the case terminated for lack of any ‘offence’ was, predictably, rejected.  The fine is relatively small (two thousand roubles), and Karakash notes that the court did not order confiscation of the device on which Mennanov expressed his birthday wishes.

Mennanov’s mention of the Mejlis in a simply Facebook post for Mustafa Dzhemilev’s birthday was, incredibly, labelled an infringement of Article 13.15 of the Code of Administrative Offences – abuse of freedom of mass information.  The alleged abuse was in the fact that the Mejlis was mentioned without adding that the body has been banned in Russia.

At a recent meeting of the civic initiative Crimean Solidarity, lawyer Dzhemil Temishev advised Crimean activists to be careful on social media and to safeguard themselves against “unnecessary risks”.   That means removing posts, even from 5 or 10 years ago, if these contain, for example, reference to anything which Russia as occupying power has banned.

There are certainly grounds for such warnings.  Emil Kurbedinov, who recently became Laureate of the 2017 Human Rights Defenders at Risk Award was sentenced on  to a 10-day term of administrative arrest in late January for the reposting in 2013 of a video showing Hizb ut-Tahrir, a movement which was then and remains legal in Ukraine.  Armed searches were carried out of his law office and home, with the computers removed containing confidential information about other victims of persecution whom Kurbedinov is defending.

Following a mass detention on Feb 21, 11 people were jailed, Marlen Mustafaev over an old post on a social network page and the other ten merely for having stood on the street and / or streamed the proceedings on the Internet.  This was, of course, presented as the seizure of ‘terrorists’ on Russian TV, with the use of fake video footage.  Mustafaev was also jailed for 11 days over a social network post on VKontakte, also allegedly showing a Hizb ut-Tahrir, this time from July 2014. ‘Judge’ Viktor Mozhelyansky who has become notorious for his willingness to rubberstamp politically motivated rulings, turned down all applications from Kurbedinov, who was representing Mustafaev, even to examine screenshots of the purportedly offending material.

Remzi Bekirov was one of the activists arrested and jailed for 5 days on Feb 21, merely for standing outside Mustafaev’s home during the search.

On March 30, he was called into the so-called ‘centre for countering extremism’, supposedly to collect the tablet which had been taken from him.  He was there detained, and presented with a new administrative charge – ‘circulating extremist material’ under Article 20.29 of the Code of Administrative Offences.  The supposed extremist content was a reposted video clip about the ‘Prymorsky Partisans’, a vigilante group that targeted police officers whom they accused of brutality and corruption.  The repost itself was seven years old and therefore far pre-dated Russia’s invasion and annexation of Crimea.  It had moreover been on a VKontakte page which Bekirov deleted earlier this year.

Mennanov’s administrative fine is for something on Facebook, to which the FSB does not appear to have such unlimited access.  It is, nonetheless, clear that in Russian-occupied Crimea, methods of surveillance are being used that may be 21st century in their use of technology, but date right back to the worst Soviet practice of fighting ‘dissidents’.