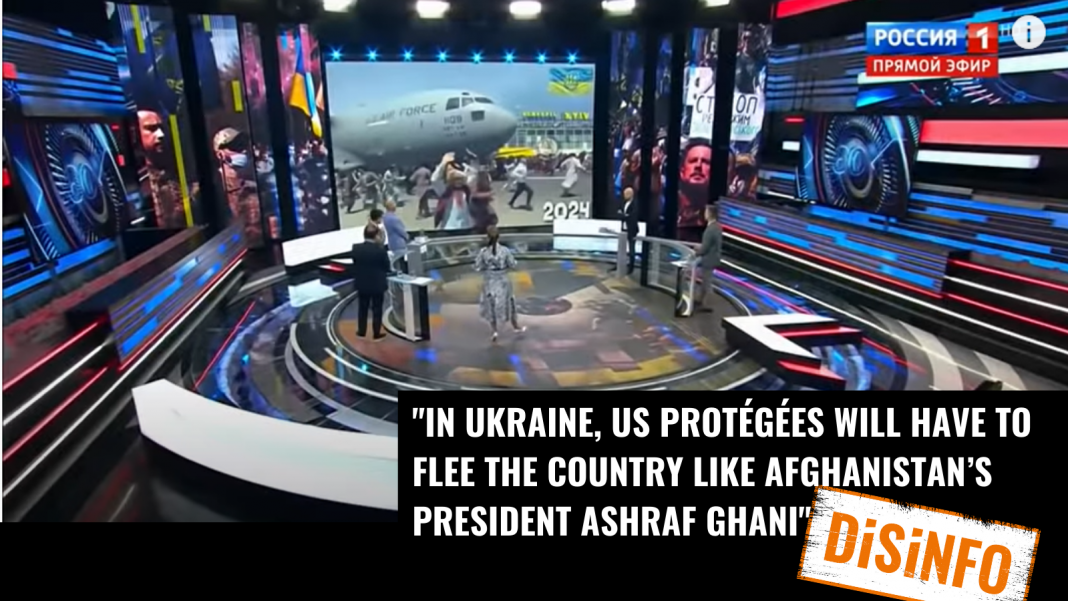 As the international community reckons with the fall of Kabul and Afghanistan itself into the Taliban’s hands, the mood on air of Russian state-controlled TVs is that of schadenfreude. The US has turned into a “regional state” or a “damaged petrol station”, according to the host of political talk-show “60 minutes”.

The Kremlin is yet to shape a coherent narrative about the recent events in Afghanistan. As of now, the comments coming out of Russia diverge widely: while the Chechen leader Ramzan Kadryov called Taliban an “American project” and warned to “prepare for the worst”, Russia’s ambassador to Afghanistan alleged that the situation in Kabul was better with Taliban than with now exiled president Ashraf Ghani. Nonetheless, the Kremlin’s propagandists have jumped at the opportunity to draw parallels between Afghanistan and Ukraine.

The hosts and guests of “60 Minutes” on state-controlled Rossiya 24 TV channel gleefully shared a harrowing image from Kabul airport that has been converted into a meme about Ukraine, claiming that US “protégées” in Ukraine will have to flee the country like Afghanistan’s President Ashraf Ghani. Referring to one of the most prominent pro-Kremlin disinformation tropes, the host of the show added, that Ukrainian “Nazis” were the equivalent of Taliban.

The Spanish edition of Sputnik has also suggested that the US deliberately seeded chaos in Afghanistan, to undermine China and Russia.

As the world grapples with humanitarian situation in Afghanistan and potential increase in the influx of refugees, migration has also been a topic on the pro-Kremlin media. However the focus is not on Afghanistan, but on Lithuania and Belarus.

Disinformation as a part of a hybrid attack

In recent weeks Lithuania has faced an unprecedented increase in arrivals of irregular migrants from the Middle East and Africa, entering the country via the border with Belarus. Lithuanian and European officials have directly linked the situation to the actions of Alyaksandr Lukashenka’s regime, which has weaponized the plight of migrants and refugees as a response to EU’s sanctions targeting his regime. (For more, see investigations of Lithuanian National Broadcaster, the Dossier Center, and Der Spiegel, of how Minsk devised an international migrant-smuggling scheme). The defence ministers of the Baltic States have called the situation a “hybrid attack” against the EU and NATO, and disinformation is a key element to it.

Both Belarusian state-controlled and pro-Kremlin media have tried to portray Lithuania, and by extension the EU, as inhumane in their behaviour with the migrants, alleging they were kept in concentration camps, and that “Nazi West” treated the migrants as cattle. “Belarus Today”, the mouthpiece of the Presidential Administration of Belarus and one of the main propaganda outlets in the country, went as far as to suggest that Lithuania may face Islamist terror attacks in response to its “openly fascist actions”. Similar claims have appeared on Belarusian state-controlled TV as well.

To further advance claims of alleged ill-treatment of migrants, the Belarusian state-controlled media together with Belarusian officials resorted to manipulation tactics we have previously seen in East Ukraine. False messages along with doctored or manipulated footage are regularly released, accusing the Lithuanian border guards of injuring the migrants or failing to provide the necessary care. (Lithuanian State Border Guard Service regularly debunks such messages providing the actual video footage). Some of these false messages have trickled to proxy outlets spreading pro-Kremlin disinformation in Europe. All this emulates earlier infamous attempts by the pro-Kremlin media to smear Ukraine, by releasing fakes about killed or even crucified children in Donbas.

Notably, the doctored sentiment of concern for migrants’ wellbeing stands in sharp contrast to previous migration-related disinformation claims in the pro-Kremlin media. For years pro-Kremlin disinformation outlets have been spreading and amplifying degrading messages about migrants and refugees arriving to Europe, aiming to incite hatred and division.

Now, adapting to the present context the pro-Kremlin media seeks to sow division in Europe, by accusing the EU of helping Lithuania and Poland at the expense of other member states – all in alleged attempt to pressure Minsk.

In a perverse world of disinformation, it is the West that is allegedly trying to push “thousands of illegal immigrants to Belarus” and devising ever new plots against Minsk. In fact though, both Belarusian state-controlled and pro-Kremlin media are doing everything to protect the regime that not only wages repressions against its own population, but has also weaponized migration for political ends.