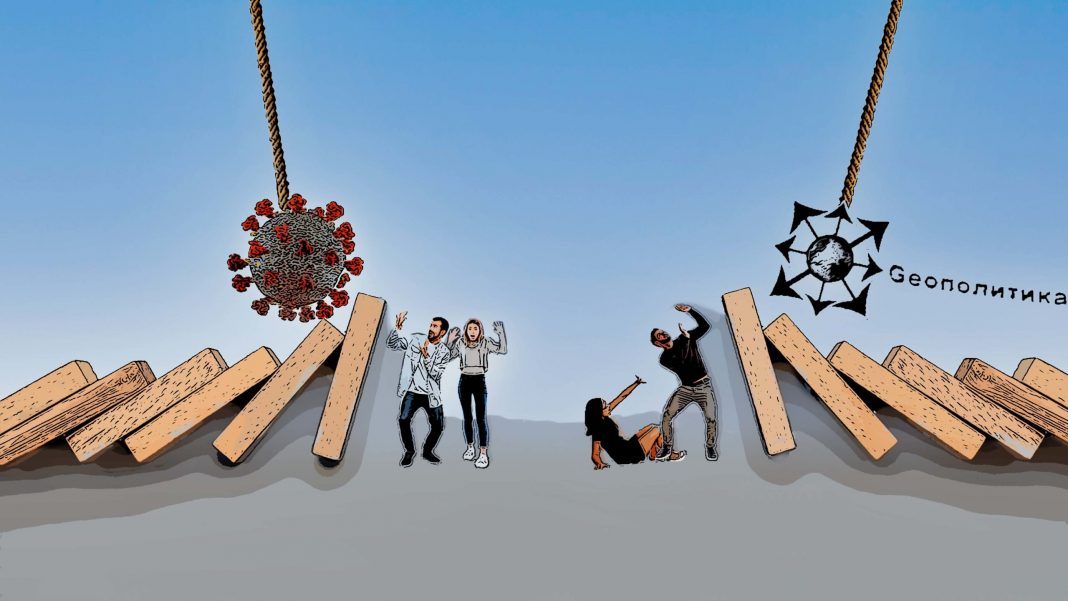 For more than 20 months, since late January 2020, the COVID-19 outbreak has been among the dominant topics in the pro-Kremlin flow of disinformation. The first piece of disinformation, published by a Russian state outlet several months before the World Health Organisation declared the outbreak a pandemic, claimed that the virus had been artificially designed in NATO labs. Since then we have seen claims that the virus only affects people of the “Asian Race” or that the virus is designed to create a New World Order.

COVID-19 continues to be a popular topic for the producers of disinformation: This week we documented several cases spreading lies about vaccination – A biochemical attack on humanity by globalists. On the other hand, the vaccines are useless. Consistency is not important for the producers of disinformation. Russian social media have noticed how state broadcaster RT attempts to encourage the use of facemasks and vaccines when targeting a domestic audience, while broadcasting the entirely opposite message to an international audience.

During the whole history of COVID-19, we have seen the focus switching from the actual virus to the vaccines and measures to combat the disease. In this context, one outlet stands out – Geopolitica.ru. The outlet is represented with over 250 cases in the EUvsDisinfo database on disinformation. The outlet is strongly connected to the “alt-right” community in both Europe and the US: In early 2021, EUvsDisinfo published a case study on geopolitica.ru and its role in Italy.

COVID-19 is a key element in the site’s narrative of a decaying West. Geopolitica.ru has offered a platform for antivaxxers and conspiracy theorists since the beginning of the pandemic. One and a half years later, Geopolitica continues to spread disinformation in several languages on the virus and on the efforts to combat the pandemic. The claim of the uselessness of the vaccine is repeated in Italian, in Spanish, in English, in Dutch, and in Russian.

The world has had access to several vaccines for over a year: Russia was the first country to declare that a vaccine was available. Large-scale campaigns for mass vaccination started in several countries in late 2020 and early 2021 and the picture changed quickly with 49 per cent of the global population now at least partially vaccinated. The virus is still spreading, but a lethal outcome among the vaccinated is rare. The vaccines work.

But the lies work as well. Geopolitica has joined a chorus of false claims and conspiracy theories on the vaccine, scaring millions, risking the lives of thousands after thousands of people, internationally and in Russia. Russia is a country with a high level of vaccine hesitancy, and currently the world’s highest death toll of over 1,000 cases per day. The EU High Representative for Foreign Affairs and Security Policy stated early in the pandemic that disinformation can kill. That should be kept in mind when we see Kremlin media continue spreading lies on the COVID-19 and the vaccines, even as the death tolls in Russia are surging.

Kremlin scaremongering covers other fields as well. NATO will drag the Baltic countries into nuclear war; the US is using Poland and the Baltic countries as Trojan horses against Europe; and if Georgia should join NATO, the country would be annexed by Turkey. Another country risking its sovereignty is, in the Kremlin’s fantasies, Moldova, just about to be swallowed by Romania. All those claims nicely fit into the narrative of threatened sovereignty. A lie repeated numerous times in recent and older history of Kremlin disinformation.

The Kremlin media continue their attacks on dissident leader Alexei Navalny. This week, Russian state radio claims the attempted assassination in August 2020 was a hoax. With this claim, the EUvsDisinfo database contains 415 cases of disinformation, targeting Alexei Navalny. This equals roughly the combined number of cases, targeting France and Spain. 20 October 2021, the European Parliament awarded Alexei Navalny the Sakharov Prize:

The European Parliament has chosen Alexei Navalny as the winner of this year’s Sakharov Prize. He has campaigned consistently against the corruption of Vladimir Putin’s regime, and through his social media accounts and political campaigns, Navalny has helped expose abuses and mobilise the support of millions of people across Russia. For this, he was poisoned and thrown in jail.

Of course, no week passes without disinformation attacking Ukraine: