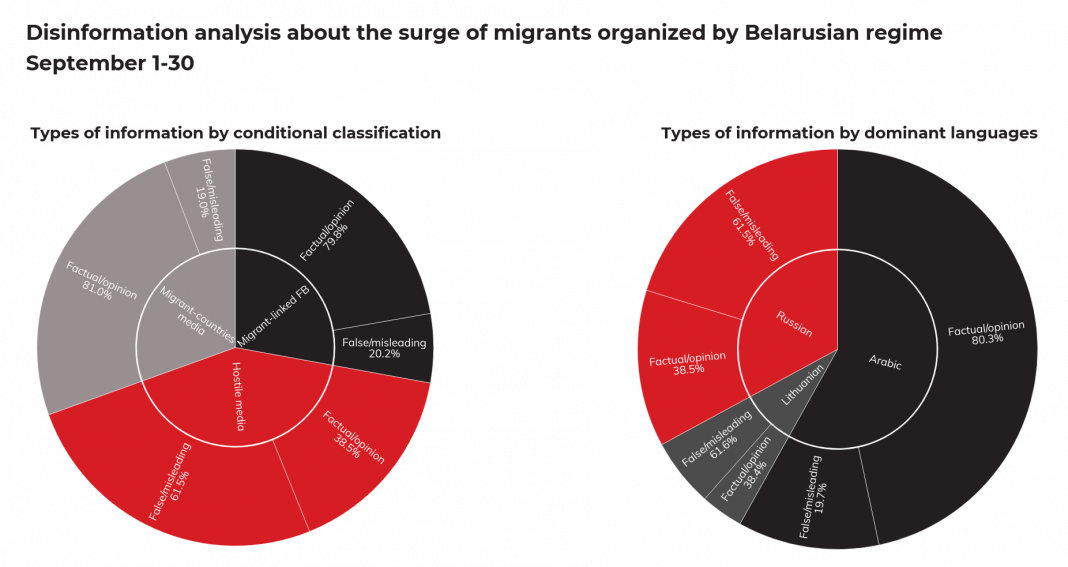 As Lithuania, Latvia, and Poland grapple with a dramatic influx of illegal migration on the border with Belarus, the latter has started a blame-shifting game. According DebunkEU.org report, Minsk officials sought to create an impression that it is the EU who is pushing “terrorists and extremists” into Belarus. At the same time, misleading information about an uprising in a Lithuanian migrant camp was spreading on migrant-linked Facebook groups.

In September 2021, DebunkEU.org analysts examined 1 638 content items from migrant-linked Facebook groups and pages, news portals from the countries of origin of migrants, and Kremlin-affiliated, hostile media.

Out of the latter, sputniknews.lt distributed the most articles, and ria.ru and lenta.ru reached the largest potential audience. “Quite expectedly, the biggest share of disinformation was spread  through aforementioned media outlets – in the last two weeks of September, the share of false and misleading content in the pro-Kremlin media was higher than 70%,” says Laima Venclauskienė, senior analyst at DebunkEU.org.

The analysis has shown that as the amount of misleading and false information increased, so did the number of articles claiming that Lithuania, Latvia, and Poland have been brutally pushing migrants into Belarus. According to Ms Venclauskienė, this may indicate that pro-Kremlin media has shifted its strategy, and as the talks between Vladimir Putin and Alexander Lukashenko on the future Union State move forward, it is likely that the amount of communication favouring Belarus may increase.

Based on the latest research, one of the biggest waves of disinformation was recorded at the end of the month, immediately after Lukashenko’s private visit to Sochi, which coincided with a meeting of the Russian Security Council convened by Vladimir Putin on September 24. During the talks, top Moscow officials discussed relations with Belarus and measures on how to ensure the security of both countries.

On September 26, Belarusian TV channel STV broadcasted an interview with Deputy Interior Minister Nikolai Karpenkov, where he stated that the European Union is sending “terrorists and extremists from all over Europe” to Belarus and uses illegal migrants as a cover. On the same day, another Belarusian official, Secretary General of the Security Council Alexander Volfovich, told ONTV that in the last two months Belarusian border guards had recorded more than 700 attempts to expel 8 500 migrants from Lithuania and Poland to Belarus. It should be mentioned that comments made by Volfovich were also repeated by media sources in Arabic, mostly – a branch of the Kremlin propaganda network RT Arabic.

Proliferation of this narrative continued on September 27, when at a meeting with top law enforcement officials, Lukashenko said the West, which had started a hybrid war and war of sanctions, was to blame for the migrant crisis. Despite concrete evidence that it was the Belarusian regime that organized the flow of illegal migration to Europe, to create disinformation narratives pro-Kremlin media flipped the accusations and claimed that the crisis was orchestrated by Lithuania and other EU members.

“The intent behind such statements is to create an impression that Belarus must defend itself against the ‘aggressive’ West. The narrative of an ‘external enemy’, which has long been established in the Kremlin propaganda, is often used to secure public support for the state leader Vladimir Putin, and in this case – his counterpart in Belarus, Lukashenko,” says Ms Venclauskienė.

According to the expert, articles accusing Lithuania and Poland of torturing and killing migrants tend to draw comparisons between the allegedly immoral West and the humane, strong, transparent Belarus. “The aim is to discredit the efforts of Lithuania and the EU to manage the flow of illegal migration. However, publications of this sort never mention the fact that Belarus itself is guilty of many human rights violations. Migrants who find themselves stuck there cannot receive help from international organizations, because Minsk deliberately does not create conditions for such organizations to exist in the country,” says DebunkEU.org analyst.

The situation on Facebook looks a bit different – members of migrant-linked groups are mainly interested in conditions in temporary accommodation camps. One of the most striking examples recorded last month clearly shows how facts are mixed with lies to mislead the public and discredit Lithuanian border control services.

After a riot in Rukla camp broke out on September 26, a video with a macabre thumbnail saying “Killer Lithuania” appeared on YouTube. It can be seen in the clip that tear gas was used against migrants – it was later confirmed by the Lithuanian police.

However, while some accurate events are shown, the migrants interviewed in the video accused officers of using tasers and said that a child had died from injuries suffered after an electric shock. According to DebunkEU.org analyst Gintarė Sereikaitė, in this case facts were mixed up with lies again. “The news about the deceased child are not false – unfortunately, it did actually happen, but not as a result of actions of the officers, but because the child had been ill for some time. This was confirmed by the parents, the Ministry of the Interior and the Ministry of Social Security and Labor,” says the analyst. It is also worth mentioning that the link to this video was shared in the comments under Lithuanian articles about the riot in Rukla.

According to DebunkEU.org data, RT Arabic reached the largest potential contact audience when it comes to media outlets from countries of origin of the migrants. According to Ms Sereikaitė, no outlets stood out in terms of disseminated content, because the same news stories were simply repeated in a wide network of in Arabic news websites – similarly to social media. “On Facebook, the largest potential audience has been reached by groups targeting Arabic-speaking audiences. Because of the group’s settings, most of the content is only available to users from the Middle East. If we would join this group from Europe or the U.S., we would not see posts related to migration, but instead see content about TV series or animals,” says the analyst.