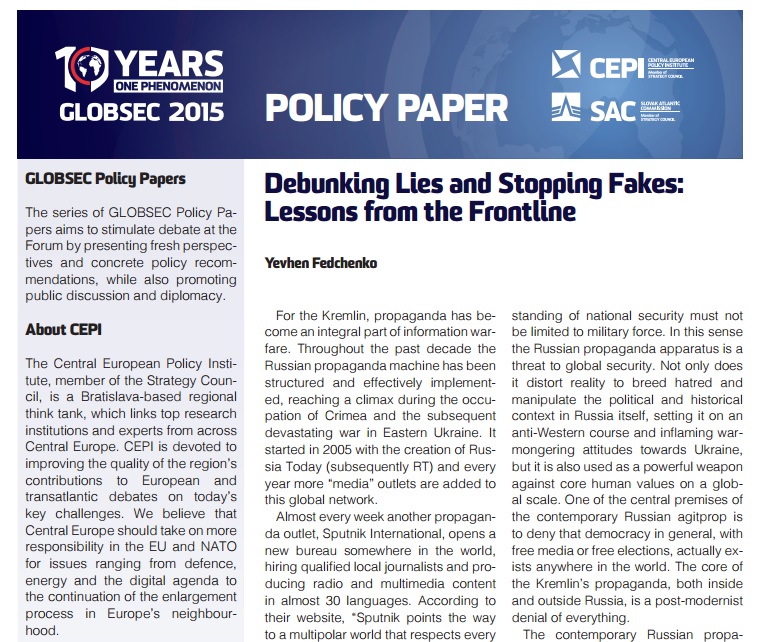 For the Kremlin, propaganda has become an integral part of information warfare. Throughout the past decade the Russian propaganda machine has been structured and effectively implemented, reaching a climax during the occupation of Crimea and the subsequent devastating war in Eastern Ukraine. It started in 2005 with the creation of Russia Today (subsequently RT) and every year more “media” outlets are added to this global network.

StopFake.org has researched and debunked scores of outlandish stories of Russian propaganda including “HIV dispersed by Ukrainian military jets over Donbas to punish the local population” (to encourage locals to flee the territory), “President Obama bans the use of balalaikas in the US until 2020” (to inflate anti-American sentiments among Russians) or “Two slaves and plot of land to Ukrainian soldiers fighting in Donbas” (to show the alleged barbarism of the Ukrainian army).

Looking at them separately, and using an elementary level of critical thinking and media literacy (while not being subjected to constant propaganda bombardment from all sides), most people would find them amusing and not very newsworthy.

However, this approach has proved to be effective. It is aimed at producing absurd stories based on belief not fact, rumors not knowledge, and then extensively multiplying them via television and social media. This makes the fabricated information popular (even viral), arguably very influential, and hard to debunk.

By Yevhen Fedchenko, Director of the Mohyla School of Journalism in Kyiv, Ukraine, and Co-Founder of the verification website StopFake.org.

About CEPI. The Central European Policy Institute, member of the Strategy Council, is a Bratislava-based regional think tank, which links top research institutions and experts from across Central Europe. CEPI is devoted to improving the quality of the region’s contributions to European and transatlantic debates on today’s key challenges. We believe that Central Europe should take on more responsibility in the EU and NATO for issues ranging from defence, energy and the digital agenda to the continuation of the enlargement process in Europe’s neighbourhood.