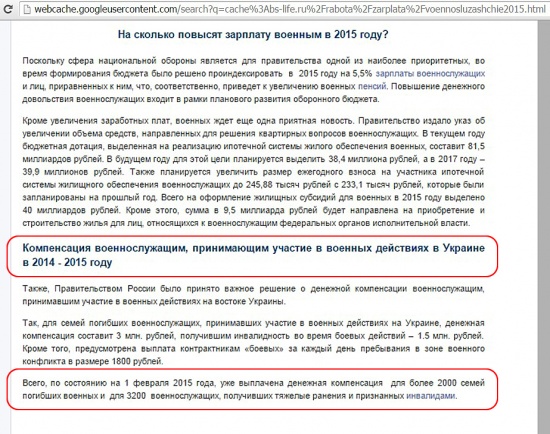 Several days ago WarInUkraine team saw the following text on a website bs-life.ru: The text was as groundbreaking (wow, finally here’s Russia’s confession of their troops fighting in Ukraine!) as it was absurd. The absurdity comes from the fact that adopting such a decree or even discussing it is impossible before Russia officially admits its involvement in the war. This is how the sequence should look like: first they officially admit participation in the war and only then adopt a decree on compensations; not the other way around.

Moreover, compensations are already guaranteed for soldiers by Russia’s law 306-ФЗ dated 07/11/2011RU, and no separate decrees are needed to pay compensations to soldiers’ families (for casualties in Ukraine or in any other war).

Moreover, the war has been going on for more than a year. Russian soldiers have been dying almost from the very beginning. Would they think about compensations only now? Of course not. The soldiers’ families have been compensated for many months.

Which is why the very existence of such a document (Government decree, no less!) and even its discussion would be absurd. Should such a decree be discussed by the Government, this information would definitely be reported by lots of other sources – actual well-known outlets. What we have here is an obscure website which’s journalism exploits were unheard of until now and which isn’t even a media outlet, boasting such secret information and such high-level sources.

This is why our team decided the article was a fake and the website was a scam trying to get free publicity and visits with such a hot topic.

We simply dismissed the website and continued our work. Unfortunately, several days later the website was discovered by several media outlets who did believe the information. After that we issued a warning that the website and the info were fakeRU. We did not warn about this before because we didn’t believe the media would buy such an obvious fake.

The website got widely publicized, which is when the owner deleted the info on 2000 dead soldiers, but the information remained in cached versions. The owner capitalized on the audience’s and media psychology: deleting a part of the article convinced some media outlets even more that it was an accidental leak of true information.

Even more unfortunately, the major international media took the bait, wrote articles on that, started calling me for comments.

Journalists showed me a reply from the website’s “editor office” (they send a request via an e-mail address they found there): The website’s spokesman, Anatoly Kravchenko, boasts inside information from the Russian Ministry of Defense and claims the information was taken down under threat of blocking the website [ostensibly from Russian state Internet watchdogs]

Another point is the name “Anatoly Kravchenlko”. This is my good friend’s name. He is an activist well known in Russia’s opposition circles. He is the head of Alexey Navalny’s Progress Party in Voronezh and is living in Moscow right now. He has no relation to war investigations. I know him well and talk to him almost every day. You can see him in a picture from my birthday party (leftmost). This is why I asked him right away whether he wrote this letter. Anatoly Kravchenko confirmed to me he did not write that reply

The logical conclusion was that somebody just used his name. Could this be my friend’s namesake? Theoretically, that is possible, but if we take into account that it is definitely a spam website and its owner knows perfectly the info is fake, it’s logical to assume that he used a fake name (or, in this case, the name of a real person, Anatoly Kravchenko). The website’s owner could have hoped that the media will google Anatoly to check the information and find out he’s an opposition activist, thereby trusting the info even more.

I tried to investigate bs-life.ru to understand what the website was created for and how it makes revenue. It turned out to be quite simple. Several years ago some IT uy created several aggregator websites to publish (rewritten) articles found elsewhere. All the articles follow a single topic so that the website would have good values in search systems and users interested in the topic would visit it.

Then the website’s owner turned to a so-called “customer depot” which are often found on the Internet. In this case it was leadia.ruRU. This depot offers a rather simple algorithm for website owners: you introduce “online support chat” code into your website, and it the website’s owner leaves his phone number via the chat interface or even orders legal counseling, you get paid. The chat widget is inserted right from leadia.ru and is an automatic script fishing for visitors’ phone numbers. There’s no real person running the chat.

Here’s the code of the “online chat” found at bs-life.ru and actually taken from leadia.ru: Here are leadia.ru’s prices for the customers who leave their phone numbers in the chat or order a service: Posting an “article” on the Government’s “decree” and 2000 soldiers killed was just a very successful decision of the website’s owner which got him enormous free publicity (the website was quoted and linked to by major international media) due to touching a hot topic.

I’ve recorded video proof on how bs-life.ru and the online chat work to fish for customer numbers. The whole process happens automatically (no ENG subs in video):

I received a callback from a legal counselor and talked to her about the website (which she knew nothing about):

I also called the numbers given at bs-life.ru (the person who answered didn’t know about the website either):

I believe all of the above is self-explanatory. Surprisingly, world’s top media outlets failed to go through the same simple process to check the facts.

WarInUkraine team’s message to the media

We are in the middle of an information war, and spreading fakes is a huge boon to our enemy, the Kremlin, as it demonstrates the media’s incompetence. Which is why, if you come across sensational information, don’t start publicizing it right away . First, try to consult an investigation team working on the war in Donbas. Our team is ready to consult the media on such issues for free. Write to my telegram account @leviev or to our email [email protected]

We encourage sharing this post, as several top-tier media and opinion leaders keep spreading the fake message from bs-life.ru.

Update: here’s Russia Today mocking everyone who bought into the fake. Interestingly enough, in the RT story “Anatoly Kravchenko” does not boast of Government sources but claims his website was hacked from a Kiev IP. Whoever this person is, he has problems with keeping a story straight.