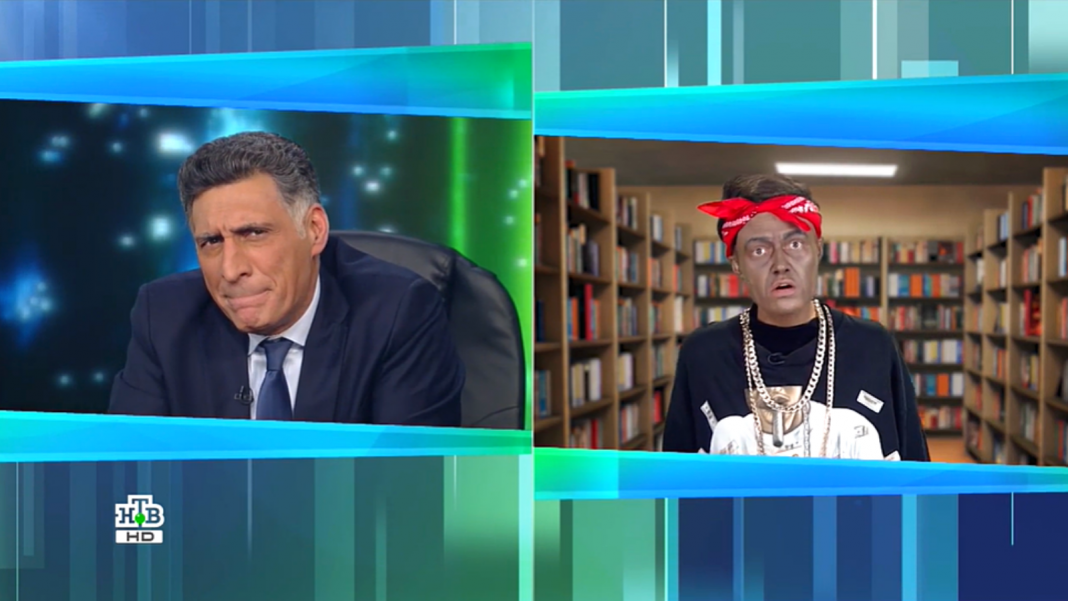 How to Get Away with Racism

The concept of “hahaganda” is one of the most deceptive instruments of disinformation; ridicule, sarcasm and jokes can slowly erase the credibility and authority of an organisation or an individual. Anyone questioning a “joke” can be branded humourless or “woke”.

RT Boss Margarita Simonyan is under attack for a skit aired on a “satire” TV-show on the Russian channel NTV. The show depicts former US President Obama in the attire of Orthodox Jews and in “blackface”. A white actor, wearing black make-up, depicts Obama as a stereotypical rapper, hollering “Black Lives Matter” until silenced by the interviewer, assuring the interviewee “there is no racism in Russia”. Ms. Simonyan is creative producer of the show and the interviewer is her husband, Tigran Keosayan.

The skit evolves around Barak Obama’s recent biography. Keosayan calls the Obama presidency “A dark part of American history” and the entire skit is literally a catalogue of racist stereotypes. The channel airing the piece broadcasts nationwide and is owned by Kremlin controlled gas giant Gazprom. British newspaper The Times picked up on the item and requested answers from Ms. Simonyan, as one of the producers. Ms. Simonyan staunchly defended her husband and the skit:

As someone who is part of an ethnic minority in Russia, Tigran regularly makes fun, on-air, of his large ‘ethnic’ nose and his belonging to a ‘black’ community (look it up if you don’t know which ethnicities are referred to as ‘black’ in Russia).

Ms. Simonyan resorts to the concept of “self-deprecation”. Making fun of yourself. Telling “bald jokes” about friends with a receding hairline is bad taste, unless you are bald yourself. Joking about stereotypes is generally only acceptable if the person joking is an object of the same stereotype. Several black actors, musicians and artists frequently use derogative terms in reference to themselves; defusing the terminology.

Mr. Keosayan has an Armenian heritage, just as his spouse Margarita Simonyan. The Russian word черный – cherny, black, is often applied to Russian citizens and migrant workers from the Caucasus, Central Asia and the Romani people. Research from the Russian NGO Sova Center demonstrates that this community regularly faces violent attacks from Russian supremacist and neo-Nazi groups. Simonyan suggests Keosayan’s “ethnic nose” qualifies him as oppressed, just like the US black community. Margarita Simonyan lashes out against The Times:

The failure of The Times to understand the nuances of various ethnic tensions in different countries, and its attempts to transfer the specific legacy traumas of the Anglo-Saxon world onto the world where such injustices had never come to pass, are the most obvious trademarks of multi-century racist imperialism.

Russia as the Victim of Racism

Let’s translate this into human language:

Generally, “racism” is a prerogative of “The Anglo-Saxons”. What would have been racist in Britain cannot be racist on NTV, because the host has an “ethnic nose”. Simonyan finishes her rant with a bold statement:

The racism had simply changed colours.

The past perfect tense of the statement is a little confusing. The Russian version of the phrase is slightly different: “Racism has simply changed colours”. This translates into something like this: Anglo-Saxon imperialists have used racism to control their empire. Now Russia is the target of this racism, not black people.

It can also mean that Simonyan agrees with the idea that nowadays white people are subject to racism. Simonyan’s RT occasionally airs this suggestion.

Or it might simply be that Ms. Simonyan is anxious to further the family business. Hahaganda is big business. Alexei Navalny notes that the Keosayan-Simonyans receive 5 million roubles – approximately 55 000 EUR – for every episode of the show. They might need the money to pay for the tuition of Keosayan’s daughter in the United States.