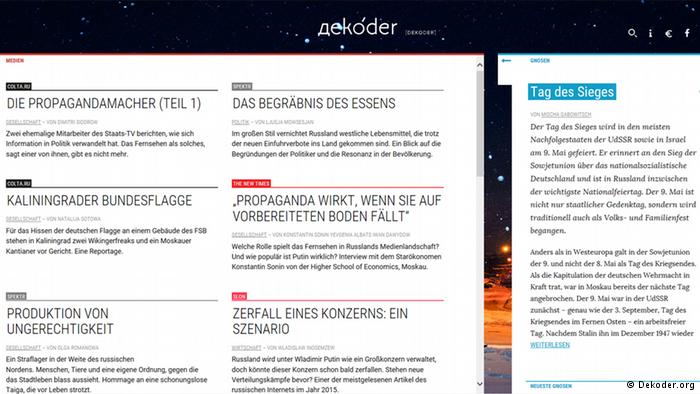 There are new possibilities for people who read German and want to inform themselves about what’s going on in Russia. Dekoder.org offers translations of original source Russian media stories without the propaganda.

Imagine a website with hardly any pictures. Only a starry sky and a metro station emblazoned with Cyrillic lettering in a snow covered city can be seen in the header and between two columns of text. The online project dekoder.org, which started in early September, is betting on people seeking out their site to read – to read things that cannot be found elsewhere.

The site publishes German translations of what its editors feel is the best Russian journalism available. There are articles from online media sites such as Colta.ru and Slon.ru, as well as print media from renowned sources such as “The New Times,” “Nowaya Gazeta” and “Kommersant.” Berlin publisher and project founder Martin Krohs tells DW that the selection comes from Russian media outlets that are “neither under state control, nor financed by oligarchs with strong government ties.” The site’s basic principle is “non-governmental, liberal, democratic.”

The catalyst for “Dekoder” was the “intense polarization and increasingly emotional direction of ongoing debates.” Krohs goes on to say that, “Part of the problem is certainly the fact that state-run media sites in Russia have gotten so involved,” citing Russia Today (RT) and other print media. “They are putting out political messages.” But the publisher also says that sometimes Western media “don’t do a good enough job of differentiated reporting” when it comes to Russia either.

Therefore, “Dekoder” is “a machine that makes that which cannot be heard, heard.” Krohs is not interested in confronting the Russian government though. He says, “We don’t look at this as counter propaganda.”

A hybrid form of journalism

The project, which is funded by donations, is manned by five staff members and five freelancers. Translations are carried out in accordance with the original language authors, as well as the original publishers. Political themes dominate. Some examples have been stories about propagandists on Russian television and predictions about Russia’s possible collapse, but also reports on Russian prison camps. There are few cultural articles, as project team member Leonid Klimov, himself a cultural scientist from Russia, sadly acknowledges. He says that it is difficult to find good articles on culture in the Russian media that one would be able to understand as an outsider.

Unique to the project are the factual texts that “Dekoder” staff write and publish in an attempt to make everyday life in Russia more graspable to a German speaking audience. The texts have built in hyperlinks, and in them one can learn that schnapps that is made at home is called “Samogon,” or that “Menty” is a derogatory term for a police officer. Short, encyclopedia like texts give background information explaining the significance of people like the influential journalist Dmitry Kiselyov from the state run media agency “Rossiya Segodnya,” or the importance of “the white ribbon” as a symbol during opposition protests in 2011/2012.

Reading between the lines

Roughly a week after its launch, Krohs is happy to report that the project is off to a “fantastic start” and that it has exceeded all expectations. The project’s founder says that, “At the very beginning we had over 500 likes within 24 hours.” At the moment, most of the site’s readers are professionals interested in Russia and Eastern Europe. But Leonid Klimov says that they want to reach a wider audience. “Our target group consists of people that we call Spiegel readers’,” he says, refering to the iconic German news magazine Der Spiegel, “people who want to understand the background of a story and aren’t just interested in how it is reported on superficially,” says Klimov.

At this junction, project founder Krohs brings up the old cliche that, “Russia is hard to understand for a European.” He says that “Dekoder” is a way for German language readers to “dissect Russia themselves.”