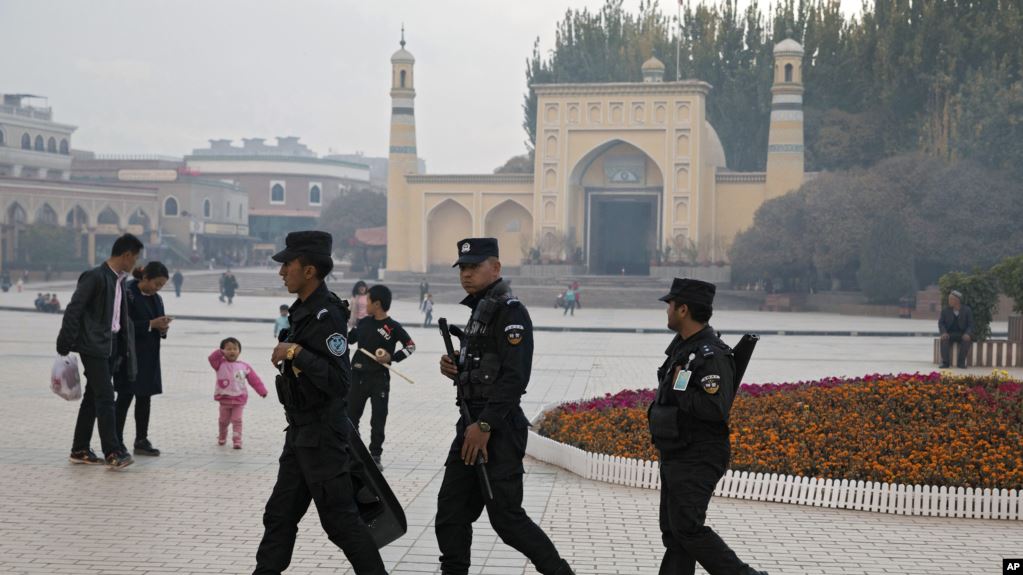 The tweet cited a study, “An Analysis Report on Population Change in Xinjiang,” by Li Xiaoxia, a researcher for the Xinjiang Development Research Center.

The study claims that a decrease in the birthrate and natural population growth rate in Xinjiang in 2018 “resulted from the eradication of religious extremism.”

“Study shows that in the process of eradicating extremism, the minds of Uighur women in Xinjiang were emancipated, and gender equality and reproductive health were promoted, making them no longer baby-making machines. They are more confident and independent,” the embassy tweet read.

The claim that China’s mass sterilization policy has liberated Uighur women from being baby-making machines is false. Evidence gleaned from official state documents and other sources has demonstrated that China pursues a policy of state-backed sterilization that some critics say meets the United Nations definition of genocide.

The study particularly takes aim at the research of Adrian Zenz, one of the world’s foremost scholars on the People’s Republic of China, who has written extensively about the Uighur situation. It accuses him of making “false allegations about the population of the region.”

Zenz is the author of a widely-cited research paper, “Sterilizations, IUDs, and Mandatory Birth Control: The CCP’s Campaign to Suppress Uighur Birthrates in Xinjiang.”

Zenz told Polygraph.info that five or six purported “research” papers had been published to counter his work on Chinese population control in Xinjiang. “All [of the papers] are misinformation. Some merely boost the government line. Others try to attack my numbers by manipulating and misrepresenting them,” Zenz said.

By analyzing Chinese government documents, Zenz concluded that “natural population growth in Xinjiang has declined dramatically,” despite official claims to the contrary.

That drop was linked to Chinese state policy in which pregnancy checks, forced intrauterine devices, sterilization, abortions and extrajudicial internment for birth control violations have been employed in a sweeping campaign to slash birth rates among Uighurs and other ethnic minorities.

Zenz argues his findings “provide the strongest evidence yet that Beijing’s policies in Xinjiang meet one of the genocide criteria cited in the U.N. Convention on the Prevention and Punishment of the Crime of Genocide — ‘imposing measures intended to prevent births within the [targeted] group’.”

However, the recent Chinese study claims that couples of childbearing age who make a “personal decision” to use “effective and appropriate contraceptive measures,” including “tubal ligation (female sterilization) and the insertion of intrauterine devices (IUD),” are “fully respected.”

The Chinese report maintains that “personal choice” had played a greater role than “government policy” in family planning policies that have resulted in demographic changes in southern Xinjiang.

Zenz said those statements regarding tubal ligation and IUD would amount to “new evidence” in any future “Uighur genocide tribunal.”

“Their propaganda says that [the conception measures] are voluntary, comparable with the voluntary nature of forced labor and being sent to a camp. Evidence of coercion is comprehensively presented in my related research report,” Zenz told Polygraph.info.

For instance, Zenz’s study notes the case of Zumrat Dawut, who was imprisoned in Xinjiang’s sprawling network of internment camps.

After being released, Dawut was later fined for having three instead of two children. She ultimately agreed to be sterilized after authorities threatened to send her back to the camps if she refused.

Another Uighur, Mihrigul Tursun, also recounted being forcibly sterilized, while Rakhima Senbay said she was fitted with an intrauterine contraceptive device against her will. Another woman, Gulzira Mogdyn, said doctors “cut my fetus out” without using anesthesia.

Leaked Chinese government documents also revealed a 2019 plan to sterilize 14% and 34% of all married women of childbearing age in two Uighur counties that year, respectively. That project, targeting all of southern Xinjiang, continued into 2020 with increased funding.

“By 2019, Xinjiang planned to subject at least 80 percent of women of childbearing age in the rural southern four minority prefectures to intrusive birth prevention surgeries (IUDs or sterilizations), with actual shares likely being much higher. In 2018, 80 percent of all net added IUD placements in China (calculated as placements minus removals) were performed in Xinjiang, despite the fact that the region only makes up 1.8 percent of the nation’s population,” Zen wrote.

The recent Chinese study also claims the Uighur population grew from 10.2 million in 2010 to 12.7 million in 2018, an increase of more than 25 percent. Chinese Foreign Ministry Spokesperson Zhao Lijian had previously cited that figure when responding to allegations that China’s demographic policy towards Uighurs in Xinjiang fits the definition of genocide.

Zenz previously told Polygraph.info that “the 25% increase is some strange non-public figure.”

He said Chinese officials “only speak of birth or population growth rates for all of Xinjiang,” but “arduously avoid comparing the declines in Uighur prefectures, because those are much higher.”

That is because most of the Uighur population is located in the autonomous region’s southern prefectures, while the majority of the Han Chinese inhabitants are located in the region’s north.

The birth control policy is part of a broader campaign of repression against religious minorities in Xinjiang. As Polygraph.info previously reported, leaked government documents and investigations by rights groups and news organizations have produced abundant evidence that China maintains a massive network of detention centers where an estimated 1 million to 3 million people have been detained.

Experts say these campaigns have a strong component of Islamophobia. In July, two Uighur activists groups filed a claim with the International Criminal Court (ICC) alleging that Chinese officials had engaged in genocide and crimes against humanity against the Uighurs in Xinjiang.

On December 14, the Hague-based court declined to hear the case on jurisdictional grounds, as China is not a signatory to the ICC.

In October 2020, U.S. senators introduced a bipartisan resolution that would designate Uighur human rights abuses by China as genocide.

The resolution seeks to “hold China accountable under the 1948 United Nations Convention on the Prevention and Punishment of the Crime of Genocide.” It is further targeted to help coordinate an international response to end those abuses.