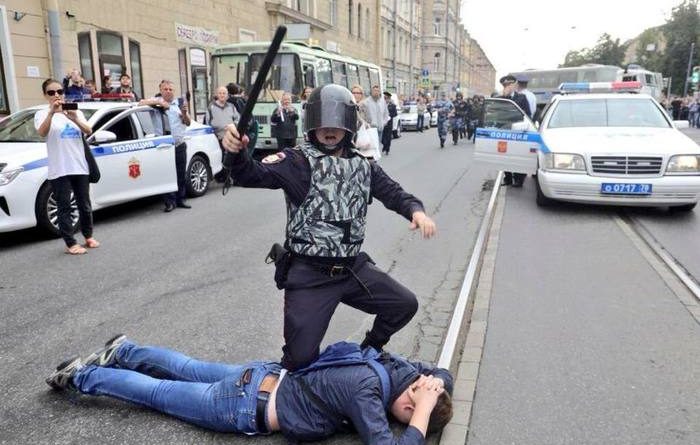 By Kseniya Kirillova, for Integrity Initiative

One of the pillars of Putin’s political system is confrontation with the outside world and the search for enemies. His regime conducts “information operations” against the West to try and undermine democracy. The operations are in many ways similar to the propaganda techniques used by the Kremlin inside Russia. They use lies, slander, selective use of facts, conspiracy theories and a multitude of contradictory versions of reality designed to destroy the notion of truth, as well as exploiting the slightest contradictions within Western societies.

However, the Kremlin also creates narratives aimed at specific social and ideological groups. This tactic is most successful with extreme right-wing groups in Europe and the United States. For them, Russian propagandists created an ideology supposedly based on ideas of religion and family.

This ideology is characterized by aggressive imperialism, an emphasis on “traditional values”, coupled with a vehement rejection of Western values, often a pseudo-religious justification for the superiority of the “white race” or individual nations (sometimes with blatantly Nazi elements), claims to the messianic nature of the activities of its supporters, creating an illusion of a “clash of civilizations”, “holy war”, fear of immigrants, and other similar themes. A good example is the Eurasianism of “Kremlin ideologist” Alexander Dugin. Major American publications have more than once described ties between local white supremacists and Russia, in particular, Dugin’s followers. Just recently, one such organization, League of the South, which is openly sympathetic to Russia, created a section in Russian on its website. “We understand that the Russian people and Southerners are natural allies in blood, culture, and religion. As fellow whites of northern European extraction, we come from the same general gene pool. As inheritors of the European cultural tradition, we share similar values, customs, and ways of life,” League President Michael Hill wrote in an essay headlined “To Our Russian Friends.”

Senior Fellow at the Centre for Analysis of the Radical Right Mark Potok explains why “the League of the South admires Russia more and more with each passing day.”

“It is deeply nationalistic, authoritarian, and, increasingly, a defender of “traditional” values – values that include a new fondness for the conservative Russian Orthodox Church and also contempt for LGBT people and a pervasive denigration of women. And it is anti-globalist,” Potok said.

However, it’s very important to emphasize that the American radical right is infatuated with the image that Russia carefully tries to create in their eyes. They don’t know appear to know the real Russia. It’s important to emphasize the differences between the illusion and reality, which could help us in opposing Russian propaganda and Moscow’s influence on radical groups in the United States.

1. Russia is not a Christian state

Russia is by no means the Christian state it tries to portray itself as. The percentage of religious radicals in Russia is relatively small, and the ROC’s ideology is perceived by the majority like the Communist Party was perceived in the late Soviet era – as something that is necessary and “irreplaceable”, but not something that evokes fanatical faith.

“The high rates of self-described religiosity accompany abysmally low rates of church membership.: although 70 to 80 percent profess to be Orthodox, less than 15 percent attend services more than once a month, only 5 percent once a week, and a mere 1–2 percent belong to a parish,” Western researchers have noted.

So, in the eyes of the “Putin majority”, the church is seen as a means of protecting national identity rather than actual belief. When people are told about a threat to Orthodox shrines abroad, they perceive it as more of a blow to an element of Russian statehood, to a symbol of Russia’s presence on the territory of other countries. Even Alexander Dugin is more known abroad than in Russia itself. Very few Russians even know who Dugin is, and most of them have never read his works.

2. Not a promised land of freedom

Russia’s political structure is also significantly different from the radical right’s ideal. American radicals consider even the democratic American government to be repressive and intrusive and they advocate greater freedom and the right to freely bear arms.

“In the current New South, which is the bastard child of the American empire, a leftist, anti-Christian ‘culture of death’ pervades the land and is reflected in an immoral and aggressive government that imperils life, liberty, and property around the world. Once our Southern culture, based on its ancient Christian and European roots, is again regnant, the government of our new Southern nation will mirror that culture… Good government, responsive to the interest of the people, will replace bad government that seeks only to enrich and enlarge itself at the expense of those it is bound to serve. The Statesman will replace the politician.” Michael Hill proclaims on his website.

But Russia is a repressive state, where the government doesn’t tolerate the slightest dissent and brings criminal charges even for posts on social networks. Ekaterina Vologzheninova, a single mother from Yekaterinburg, was sentenced to 320 hours of labour for reposting criticism of Russian aggression in Ukraine. Dozens of people have been imprisoned in Russia for social media likes and reposts. “Today, many Russians are increasingly unsure about what is acceptable speech and what could land them a large fine or prison term.

State intrusion in media affairs has reached a level not seen in Russia since the fall of the Soviet Union. The laws passed since 2012 have dramatically increased the state’s control over the media landscape. With few exceptions, mainstream media outlets have become the voice of the state and use elaborate propaganda tools to mobilize patriotic support for the government. State-driven media outlets promote biased reporting and, at times, blatant misinformation on many issues of the day, especially concerning the situation in Ukraine,” Human Rights Watch has said in a report.

“The regime would like nothing better than to outlaw firearms and make us defenseless serfs. But I have determined that I need firearms to protect my family and my liberty,” says Michael Hill.

But it is unthinkable that people would be allowed to carry weapons openly in Russia. Handguns are mostly outlawedand hunting shotguns and rifles are strictly controlled, leaving less than 10 percent of the populace as legal gun owners. And Russian President Vladimir Putin has even suggested he might start a campaign using his national guard to confiscate guns from unlicensed Russian owners, a threat that reminded some of the old Soviet dissident roundups.

American right-wing radicals advocate the extension of the powers of local self-government and the accountability of government institutions to people. “Our lesser magistrates would be doing exactly what they should to protect the lives, liberty, and property of the State’s citizens against the encroachment of tyranny,” they argue.

But in Russia, any calls for separatism are punishable by imprisonment, and the police arrest people even for solitary protest actions. For example, on May 7, 2018 Russian authorities arrested 1,600 people in one day for protesting against Putin. It is safe to say that an organization like the League of the South would not be able to exist in Russia even for a day. All its participants could be arrested for terrorism and possibly spend at least 20 years in prison.

American radicals accuse the federal government of being corrupt. But modern Russia is one of the most corrupt states in the world. The government considers demands to expand the powers of local government to be separatism. There is no system for the government to report on its work to the public. Police and officials behave brutally and callously towards citizens, and people in reality have absolutely no rights and no ability to protect themselves from the state’s violence.

American right-wing radicals vehemently oppose communism, but modern Russia actively propagates the Soviet past, its symbolism and the cult of the KGB and Stalin. Images of the Soviet past are most often used by Russian propaganda to raise the “patriotic spirit” and strengthen militaristic sentiments within Russia. The Kremlin also uses communist images to create another “ideology for export” designed for the extreme left.

This ideology is primarily designed for communist and anarchist groups, as well as for that part of the Russian diaspora abroad that is experiencing nostalgia for an idealized Soviet past. It is mainly based not on a certain worldview, but on the exploitation of this feeling of nostalgia. At the same time,  the myths and images from the past are used to justify today’s growth of militarism and the aggressive policy of the Kremlin. This includes sponsoring “Immortal Regiments” and other aspects of the romanticized Soviet version of history, exploiting the Cold War experience and, of course, proclaiming the goal of “restoring the USSR” as the basis of Russian foreign policy.

For example, Victory Day celebrations are organised to promote the current Russian version of historical events, with the denial of crimes committed in the Soviet past. Often during Immortal Regiment events, people carry portraits of Stalin and symbols of the NKVD (forerunner of the KGB) and the Soviet Union, as well as the militarist slogans of modern Russia. The Immortal Regiments started as a grassroots initiative but was gradually taken over by the regime. In 2018 the Russian embassy in the USA was for the first time officially included on the list of Victory Day sponsors. The head of the Russian-American Cooperation Initiative, Sergei Gladysh, talked about this in an interview with the news agency RIA Novosti. It is obvious that the Immortal Regiment is being run by an organization created by the Russian government and financed by the Russian state.

However, the reality of the Russian state is far from the ideals of the Soviet Union. Russia is, to put it mildly, far from a “social state.” Aggressive nationalism and an emphasis on religion, combined with comprehensive corruption and huge property stratification also run fundamentally counter to any left-wing ideology. In addition, the lack of rights protection for ordinary people and the power of oligarchs, who are closely associated with the government and organized crime, crush the very idea of social justice.

It’s clear that Moscow is influencing both ends of the political spectrum in the West with a fabricated image of what the country is truly like. The Kremlin is using people’s beliefs to sow chaos and attempt to destroy Western democracies. But, while destroying and destabilizing democratic institutions and values, modern Russia is not able to offer anything in return.

The more we highlight these discrepancies, the more chance we have of inoculating society against the poison of Kremlin propaganda myths.