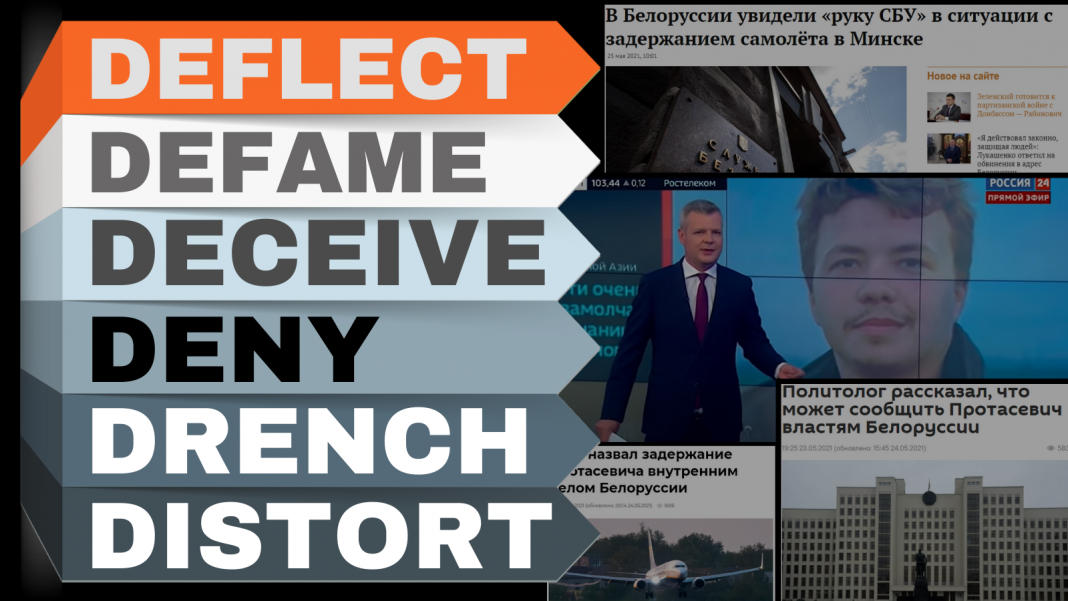 The pro-Kremlin ecosystem has established its talking points on Lukashenka’s act of, in the words of the CEO of Ryanair, “state-sponsored piracy”. All the Kremlin-controlled media outlets repeat the same two mantras: “Everybody does it!” and “Pratasevich is a Bad Guy”.

The first claim is not only entirely irrelevant, but also factually wrong. Lukashenka is the only leader of state, albeit in this case illegitimate, that has ordered fighter jets to force a civilian aircraft to land in order to detain a political opponent. The second claim – on dissident Raman Pratasevich being an “Extremist” – is both unfounded and irrelevant to the case. It does not justify Lukashenka’s decision to use military threat against a civilian aircraft.

Moscow-based Strategic Culture Foundation does, while attempting to defend Lukashenka, actually support the notion that the illegitimate president acted illegally:

Admittedly, what took place in Belarusian airspace was irregular and possibly illegal.

Still, the outlet attempts to put the blame on European leaders, “refusing to hand over Pratasevich and thus, forcing Lukashenka to make the controversial move”. And generally, Everybody does it!

Other outlets attempt to defame Mr Pratasevich himself. This is, again, entirely irrelevant to the case of Lukashenka’s military threats towards a civilian aircraft. The claims follow a line of describing any form of dissent as Fascism or Nazism.

And of course, we have the traditional “deny everything” line of defence. Threatening civilian aircraft with fighter jets is “in strict alignment with international regulations”. No, it is not. Issuing a false bomb threat against a civilian airline is not the standard procedure for apprehending a wanted criminal. This is just a plain lie.

A couple of words have to be said about the Belarusian authorities’ claim that the terrorist organisation Hamas forwarded the bomb threat against the Ryanair flight. This is actually Mike and Nick level amateurism from the Lukashenka regime. Belarusian transport authorities claimed Hamas forwarded a demand that the EU put pressure on Israel for a ceasefire in Gaza. Why Hamas would contact Minsk about this, and why they would demand a ceasefire several days after their victory parades in Gaza, remains a mystery. Senior Hamas leaders have denied the claims; putting Minsk in the awkward situation of being perceived less trustworthy than an internationally condemned terrorist organisation.

There seems to be a general rule for pro-Kremlin media contributors: “When in doubt – blame Ukraine”. The Kremlin itself did not hurry in issuing comments on the Ryanair FR4879 incident, leaving the writers without guidance on lines to take. One outlet could not wait for Moscow’s instructions and simply did what had to be done: blamed everything on Ukraine. The detention was a set-up by the Ukrainian Security Services!

When it comes to numbers, disinformation on Ukraine dominates this week: just under 20 cases are devoted to various attempts to attack Ukraine: several follow very old tropes, “Ukraine is a Nazi state”, “Ukraine is undemocratic”, Ukraine is aggressive and under US control”, “Ukraine is not a sovereign state”… All well-worn, comfortable cases of disinformation. Currently there are 4,400 cases on Ukraine in the database. That is almost a third of the total number of cases collected since 2015.

We see a conscious approach played out by the Kremlin: occupy the information space. The method has been carefully presented in Russian security studies‘ journals:

A preventively shaped narrative, answering to the national interests of the state, can significantly diminish the impact of foreign forces’ activities in the information sphere, as they, as a rule, attempt to occupy “voids” [in the information flow].

Whataboutism and bullshitting – the pro-Kremlin media is shaping the narratives and avoiding the core issues.