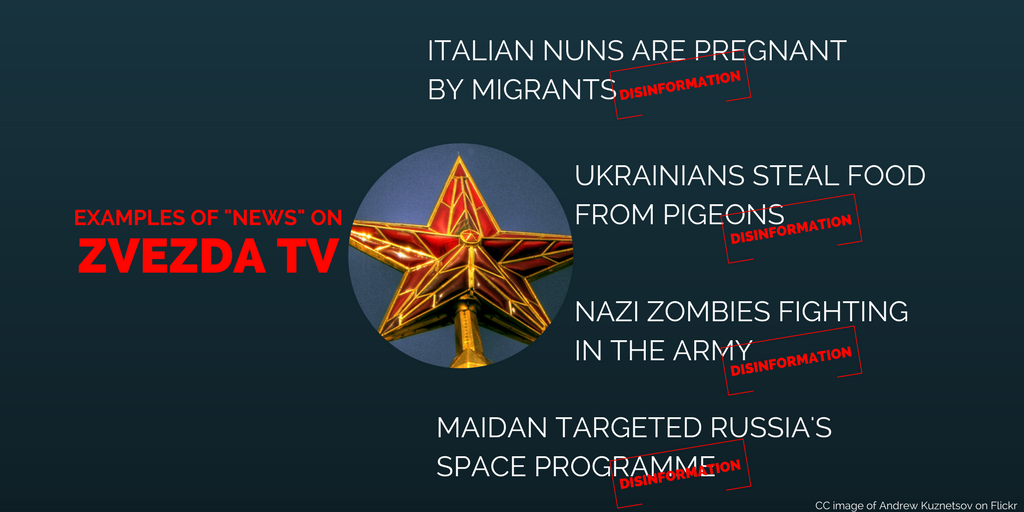 “The chemical attack in Idlib in Syria on 7 April this year was a piece of “fake news” and a staged operation from the side of the rebels, which aimed at discrediting Syria’s government forces”. So was the message in a seven minutes long report broadcast last week in Russia by the TV channel and online outlet Zvezda. In order to assess the relevance of Zvezda’s production as a contribution to throwing light on the Idlib attack, it makes sense to ask what kind of outlet Zvezda is and what interest it would have in making this sensational claim.

Patriotic and tabloid
Zvezda means “The Star” in Russian, hinting at the outlet’s role as successor to the official newspaper of the Soviet armed forces, Krasnaya Zvezda, “Red Star”. Owned by Russia’s Ministry of Defence, Zvezda broadcasts television, produces online stories and radio programmes related to military, but also, more broadly, political and social affairs. Zvezda describes itself as “patriotic”, which in Russia translates as loyal to the government line. Zvezda is also known for a style bordering on tabloid journalism – and for spreading outright disinformation. See at the bottom a list of disinformation examples from Zvezda’s output, collected by the Disinformation Review.

Weaponised and dependent
When experts make the point that Russia’s authorities “weaponise” media, Zvezda is one of the first examples that come to mind: The outlet is used by the military branch of the government for the purpose of spreading its narratives, including disinformation, so Zvezda is about as far as one can get from the notion of independent media. Not only is it dependent by being owned and controlled by the government; it is controlled by the part of the government whose leadership has gone on the record as saying that “false data” and “destabilising propaganda” are legitimate tools and that they view media as “another type of armed forces”.

Drowning out the truth with disinformation
Independent media can be overwhelmingly successful in removing the smokescreens of disinformation and getting the truth out of war zones, as we have for example seen after the downing of Malaysian Airlines Flight MH17 over Eastern Ukraine. But how trustworthy is the dependent outlet of Zvezda as a source of investigative journalism? Given the outlet’s background and track record, it is more reasonable to assume that Zvezda’s new story about alleged “fake news” production in Idlib is a sign that the Kremlin and its armed forces, which support President Assad, feel uncomfortable about the facts on the ground and want to create a smokescreen. The tactic of spreading confusion and sowing doubt by disseminating many different stories about the same event is similar to what pro-Kremlin media have done with regards to Flight MH17. The strategic aim of this kind of information operation is not to make us believe in a particular story, but rather to make us believe that we will never learn the truth, thereby creating a form of noise, which would drown out the findings of independent investigative journalism.

Examples from Zvezda’s output, collected by the Disinformation Review (subscribe here) over the past 18 months:

· Ukrainians steal food from pigeons in order to survive: https://tvzvezda.ru/news/vstrane_i_mire/content/201703140921-kyq9.htm

· There are Nazi zombies fighting in the Ukrainian army: https://www.youtube.com/watch?v=yJqtXkvwu2U

· The Ukrainian secret service is planning to smuggle over 200 kg of cocaine into Donbas in order to destroy and “narcotise” its nation: https://euvsdisinfo.eu/the-world-in-black-and-white/

· US Vice President Joe Biden proposed to break up Ukraine into a bunch of independent states: http://bit.ly/1TD3kLv

· The West has blamed Ukraine for a serious crime regarding the MH17 investigation: https://tvzvezda.ru/news/vstrane_i_mire/content/201601300911-trmt.htm

· Hundreds of well-trained and armed Turkish fascists and mercenaries operate on the Crimean-Ukrainian border: http://bit.ly/1Yga3x4

· The war in Ukraine is favourable for Europe, as Europe intends to clean Ukraine of its population and send refugees there instead: http://bit.ly/2mm6sEH

· The US were targeting the Russian space industry when they organised Maidan in Ukraine: http://bit.ly/2o0jvgt