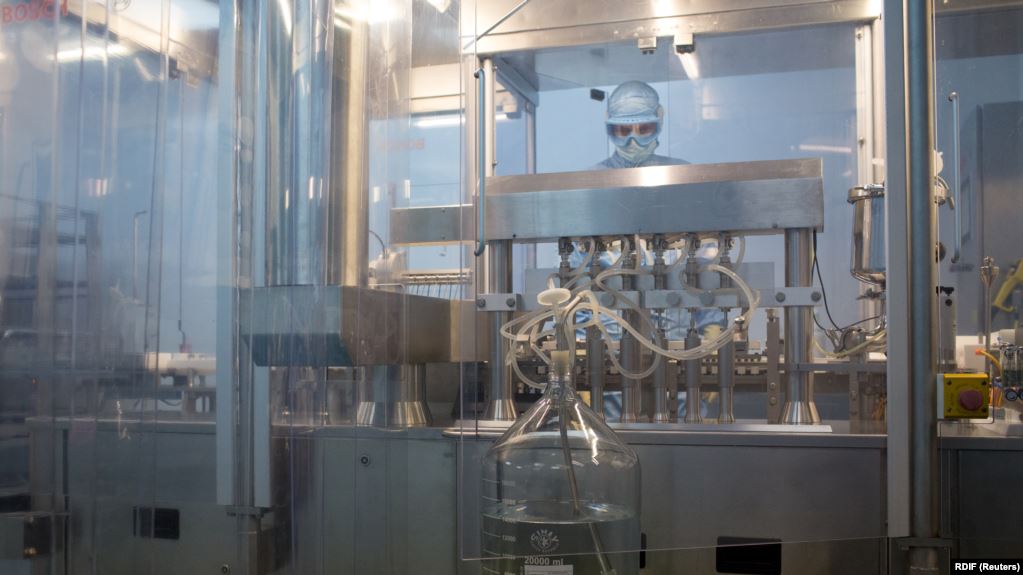 Belarus will be the first foreign nation to test the Russian Sputnik V coronavirus vaccine. One hundred volunteers there will take part in the clinical trials beginning Oct. 1, the Russian Direct Investment Fund (RDIF), developer of the vaccine, announced on Sept. 28.

The Russian health ministry approved the vaccine on Aug. 11 ahead of final phase 3 clinical trials, which were launched 17 days later.

Denis Loginov, lead scientist at Moscow’s Gamaleya National Center of Epidemiology and Microbiology, which developed the vaccine, defended its speedy approval. Sputnik V is based on the Ebola virus vaccine, which took the center 20 years to develop. “We simply changed the warhead of this rocket,” Loginov said.

Sputnik V is a two-shot vaccine, delivered with three weeks between doses. It uses live human adenovirus as a vehicle to deliver a weakened SARS-CoV-2 gene, in order to induce a protective immune system response to the coronavirus.

Adenoviruses are natural viruses that can cause a variety of cold or flu-like symptoms, which typically are mild. Because these viruses are common, one obstacle for an adenovirus-based vaccine is that some individuals may have antibodies in their system that will attack the vaccine itself.

Commenting on the participation of Belarusian volunteers, Kirill Dmitriev, head of the Russian Direct Investment Fund, made several claims about the “Western developers” of competing vaccines.

Dmitriev claimed they had postponed introducing their vaccines in civilian trials, thus sabotaging the fight against the coronavirus. He also claimed the Western vaccines relied on “experimental technologies,” while Sputnik V employed the human adenovirus platform, which has been proven safe over decades of studies.

Those assertions are false.

First, the Russian vaccine is not the only adenovirus-based coronavirus vaccine. The World Health Organization’s database of 191 vaccine candidates includes at least 11 that use similar technology. Forty are at the same clinical evaluation stage as Russia’s Sputnik V, but approval is pending until the required human trials are completed. At least seven out of the 40 vaccines already in the final evaluation stage are, in fact, adenovirus based. These include two Chinese, two Italian and two U.S. versions.

Dmitriev’s claim that the “Western” developers have postponed clinical testing ignores reality. Other vaccine developers are adhering to standard multiphase testing procedures, while Russia has abandoned such procedures, having approved its vaccine before final, large-scale tests were conducted.

The standard human testing protocol involves three stages: small-group tests to see if the vaccine produces immunity, Phase 1; larger test on several hundred people that also may involve use of placebos, Phase 2; and widespread testing involving placebos and randomization on tens of thousands of people to establish how effective the vaccine is and identify any problematic side effects, Phase 3. In this last phase, patients aren’t told if they have received the vaccine or a placebo.

According to Sputnik V’s website, the Russian developers have been strictly following all the normal steps required for vaccine approval. The large-scale trial of Sputnik V that started in August aims to involve 40,000 volunteers. The researchers at the Gamaleya Center refer to it as the “post-approval clinical studies.”

The Russian journalist Andrey Abramov, who volunteered for the ongoing Sputnik V trial, shared what was written in the consent forms he was asked to sign. He wrote that the only information about previous tests described the trials on Syrian hamsters, monkeys and a single human trial of 21 volunteers. The latter would correspond with a Phase I trial.

It is unclear whether the consent form information is complete; the forms are not publicly available, and Polygraph.info could not confirm Abramov’s account.

Dmitriev’s claim that the human adenovirus vector-based vaccines were tested for decades and proven to be safe is partly true. However, although the technology is well-studied, it is currently used only in one commercial vaccine, against rabies.

Moreover, the potential effectiveness of human adenovirus-based vaccines remains a matter of debate. Nikolai Petrovsky, a vaccine researcher at Flinders University in Australia, has said that human adenovirus-based vaccines “don’t work” if they are too weak but “become toxic” when too strong. They also can be problematic in certain demographic groups with weakened immune systems.

Questions about the safety of the Russian vaccine arose after it was approved in August. The leading U.S. virus expert, Dr. Anthony Fauci, director of the National Institute for Allergy and Infectious Diseases, said he “seriously” doubted Sputnik V’s safety.

“We have half a dozen or more vaccines,” Fauci told National Geographic magazine in August. “So, if we wanted to take the chance of hurting a lot of people or giving them something that doesn’t work, we could start doing this, you know, next week if we wanted to. But that’s not the way it works.”

Danny Altmann, Professor of Immunology at Imperial College London, warned of potential “collateral damage” from the release of a vaccine “that was less than safe and effective.” The consequences “would exacerbate our current problems insurmountably,” he said.

The WHO “cautioned” Russia not to “compromise on safety.”

Responding to the criticism, on Sept. 4, the Russian health ministry published a report on the first two phases of Sputnik V’s testing in the British medical journal The Lancet.

“The publication in one of the world’s leading medical magazines the Lancet confirms the high safety and effectiveness of the Russian vaccine Sputnik V and demonstrates the recognition of the Russian scientists by the world scientific society,” Dmitriev said in a statement released on the same day.

Alexander Ginsburg, director of the Gamaleya Center, defended Sputnik V in a Sept. 29 interview with Russian media. A “properly vaccinated” person develops “certain number of antibodies” and is permanently immune against coronavirus, Ginsburg said. Only a small proportion of people do not “respond to the vaccine” – about 5-10 per cent, he said.

Abramov said the consent form had several “odd things” – a disclaimer that “the effects of the vaccine on male sperm are unknown” and a requirement not to conceive children for at least three months after the vaccination. He also reported that shot had made him “very sick,” causing a high fever and hallucinations for two days. In addition, he wrote that his girlfriend broke up with him because she “really wanted to have children,” and he “forgot to ask her” before signing up for the trial. There is a popular conspiracy in Russia that Sputnik V permanently affects male fertility.

The Russian Direct Investment Fund said more than 50 countries have formally applied for Sputnik V and that supply agreements have been reached with Mexico (32 million doses), Brazil (50 million doses), India(100 million doses) and Uzbekistan(35 million doses). The first deliveries can begin as early as this November.

Domestically, the distribution of Sputnik V is far more limited: 50 free doses have been promised to each of Russia’s regions. Meanwhile, the country is reportedly facing “dramatic rises” of infection.

As of Sept. 29, the number of confirmed infections in Russia exceeded 1 million, with more than 20,000 deaths.