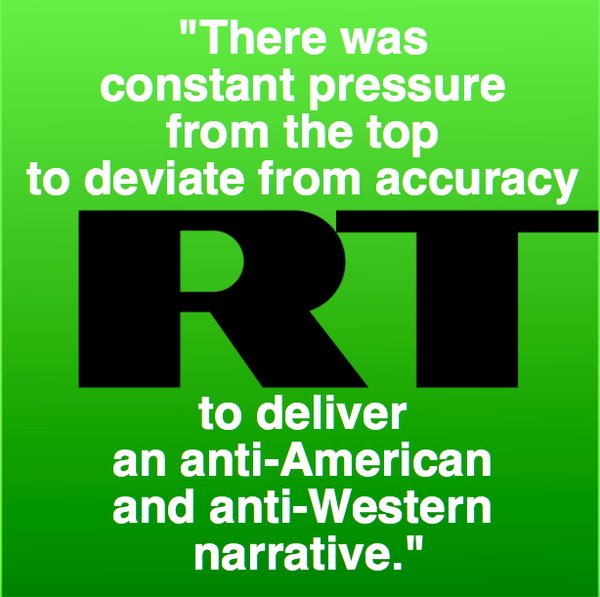 Liz Wahl is an American journalist based in Washington, D.C. From 2011 to 2014, she was a correspondent and anchor for the U.S. branch of RT TV and made international headlines following her resignation from the channel, publicly denouncing its coverage of the conflict in Ukraine and Russian intervention in Crimea. Wahl has spoken internationally about Russian propaganda tactics and current challenges in new media.

RT – formerly Russia Today – pitches itself as an edgy, envelope-pushing organization that “questions more.” This international cable news channel is funded by the Russian government, and touts itself as a platform for alternative voices that it claims are censored by the corporate-driven mainstream media.

Giving a voice to the voiceless is, indeed, a noble journalistic mission. However, my experience as an RT reporter and anchor was that RT’s main goal is not to to seek truth and report it. Rather, the aim is to create confusion and sow distrust in Western governments and institutions by reporting anything which seems to discredit the West, and ignoring anything which is to its credit. Any perceived Western political, social, or economic failure is thus a vehicle for the overall narrative. Sometimes that means perseverating on stories that, while factually true, reinforce the notion that the U.S. and other Western powers are corrupt, crumbling, and in no position to assert moral superiority toward any other country.

RT America, located just blocks from the White House, employs mostly Americans. I would estimate about 90 percent of the employees were American at the time I worked there. However, the News Director and Business Director were Russian. The nature of the relationship between Moscow and these Russian managers proved to be murky, as most of us were kept in the dark about the origins of the directives we would receive. At the same time, the Russian leaders were closely involved in our day-to-day coverage, not just providing guidance on what stories to cover and how to report them, but also sourcing the “expert” commentators we had to interview.

I can recall the day I came to the conclusion that, contrary to my Russian managers’ views, some voices simply should not be amplified.

I was five months into the job, when I arrived to the morning editorial meeting. It was the day after news broke that North Korea had launched a long-range rocket. Dmitry*, the Russian news director, wanted us to provide an alternative spin.

“The mainstream media is making such a big deal over the launch. This is a load of Western hypocrisy. Many countries test-launch rockets, why is it such a big deal when North Korea does it?” asked Dmitry. I wasn’t sure if this question was rhetorical, but since I was on the anchor desk that day, I cautiously decided to to break the silence.

“Well, North Korea isn’t exactly like every other country. It’s reclusive, belligerent, has a pretty terrible record on human rights, and has nuclear weapons,” I answered.

Dmitry seemed unfazed by the response and carried on with his thesis. “These hysterical headlines are much ado about nothing, aren’t they? It’s a typical Western double standard,” asserted Dmitry.

As an anchor, my job was to present the news and to interview the experts and commentators I was told to work with. In this case, I was told that I would be interviewing an “expert” on North Korea later, and was dictated a list of questions which Dmitry wanted me to ask. I did not find out which “expert” until moments before introducing him live.

His name was Jason Adam Tonis, the chairman of the North American Juche-Sonjun Ideas Group. Seeing the name of the guest and his affiliation for the first time, I struggled through the pronunciation.

“Welcome there Jason. So a lot of hype over this rocket. But is it possible that the fears are exaggerated?” It didn’t take too many words to come out of his mouth before I decided he was not psychologically sound.

“Of course they are,” he said. “I mean, this was just a satellite launch. Something that the U.S. government does all the time…so why is it every country can do this, but not the DPRK?”

Looks like the producers found someone with beliefs that aligned with the narrative the news director discussed during the morning meeting, I thought. I carried on with the expected questions, “Why is it the end of the world when North Korea launches one?”

I wanted to pounce on the ridiculous statement that he had uttered. Unsure where to take the interview, I stuck to Dmitry’s must-ask questions and themes: Mainstream media fear-mongering. Hypocrisy. Double standards. I got to a question about the U.S. possibly suspending food aid to North Korea in retaliation over the launch.

“Well, the whole food situation in the DPRK is overhyped. There is no famine in the DPRK. People have enough to eat. While of course they would like to have more food aid.”

At that point, I felt I had to intervene. I deviated from the questions and cut him off. “Sorry, you don’t think there is any famine there, is that what you just said?”

He rolled his eyes, annoyed at my follow-up question. “No, there is no famine in North Korea, no,” he said definitively.

He answered that in his communication with the DPRK, he was informed of the country’s high standard of living, and I would come to realize the truth if only I visited the country myself. Finally, I heard a voice in my ear telling me to wrap the interview up.

Frustrated and bewildered, I left the studio and asked the producers where they found the guest. They informed me the directive came from the top. It turned out Dmitry had scoured the internet to find an “alternative” viewpoint–one that was different from the mainstream voices “fear-mongering” over the rocket launch. That person turned out to be a staunch supporter of the North Korean regime, one of the few American supporters that could be identified through a Google search.

This was the reality of working at RT. The experts we were meant to interview were selected based on his or her ability to deliver the chosen narrative of Western hypocrisy. Sometimes the News Director chose this guest directly. But with time and training, producers learned how to pick sources and interviewees that would gain the News Director’s approval. There was a learning curve in which employees would learn how to self-censor and obtain the intuition of what to ask and, just as importantly, what not to ask.

However, this wouldn’t be the first time a person of questionable views was given airtime on a television channel. Dictators, cult leaders, and murderers have been granted interviews on news outlets widely recognized to be legitimate. Which begs the question, what makes RT uniquely different from genuine news outlets? Aren’t all media outlets biased? It’s a question I’ve been asked repeatedly since my public defection from the channel, and – perhaps not coincidentally – it is the favorite argument of those who seek to defend RT against the charge of bias by claiming that the “mainstream media” are biased too.

To answer this question, I sought to identify the definitive principles of ethical journalism. For this, I turned to the Society of Professional Journalists’ Code of Ethics. It states the primary principle is to “seek truth and report it.” In practice, this means journalists should verify information before releasing it, provide context, and never deliberately distort facts.

This was not the way RT worked. My experience of working at the channel was that it systematically selected its news stories and experts according to an underlying agenda, which was not to report on unreported stories, but to highlight apparent Western hypocrisy.

That agenda led to focusing on certain types of stories, like the Snowden revelations, the Bradley [Chelsea] Manning military trial, and every protest movement in the U.S that may echo hypocrisy or distrust. In each case, the journalistic requirement for fair and balanced context was subordinated to the imperative to make the West look bad. And while the few experienced journalists on the staff aimed to be fair and objective, there was constant pressure from the top to deviate from accuracy to deliver an anti-American and anti-Western narrative. Correspondents who rejected the leadership’s underlying agenda in their work were reprimanded; those who followed it were rewarded. Over time, employees learned from these experiences and began to adapt in ways that would be receptive to the Russian bosses.

When the crisis in Ukraine came to dominate the news coverage, this lack of context took on a sinister role. It is a role that has persisted to this day in Russian media’s coverage of the war in Syria. The narrative wasn’t just about morphing perceptions of America or the West–it was about misrepresenting a deadly conflict that directly involved Russia. Lack of context, cherry-picking details, and twisting some morsels of truth led to a warped representation of the crisis. In the eyes of the Kremlin and amplified through Russian media, including RT, the revolution in Ukraine was backed by the CIA and Western hegemonic powers who were propping up fascists and neo-Nazis to facilitate a regime change that would isolate Russia and benefit the West.

In the end, I decided to resign on air, in protest at the editorial policy: “I cannot be part of a network funded by the Russian government that whitewashes the actions of Putin. I am proud to be an American, and believe in disseminating the truth, and that is why, after this newscast, I am resigning.”

I left because RT’s behavior was such a breach of journalistic standards. The channel allures its employees and audience by promising to deliver unconventional and underrepresented viewpoints. But as the station claimed to be the champion of media plurality abroad, it became impossible to ignore the inherent hypocrisy of an organization that constantly criticizes Western powers for hypocrisy: Russia rates 152nd out of 180 countries in the world for media freedom at home.

But it is worth asking how a predominantly American workforce came to carry out such an agenda. Based on my own observations, I would say it is the result of three attributes: Anti-Americanism (or anti-Westernism), delusion, and apathy.

The first group includes those that believe that the American system is broken and are justified in the inward critique, even if that means turning a blind eye to the actions of Russia or its allies. The second group includes the conspiratorial-minded recruits that believe the U.S. to be a power so evil, that it orchestrated 9/11 and other “false flag” operations. It is indicative of RT’s stance that the members of this group seemed to enjoy the most rapid career progression. The third attribute, apathy, includes the remainder that just do the job, simply going through the motions for the monetary gain. “Playing the game” at RT results in tangible benefits like salary increases and psychological rewards like acceptance and praise. Ultimately, the RT newsroom is an echo chamber of anti-Western and hyper-critical beliefs that includes guests, viewpoints, and narratives, where in a vacuum, people can get sucked in.

It can be argued that Russian media cater to a fringe, insignificant viewership and isn’t deserving of attention or the time of day for critique. However, as a former insider, the culture of hate, extremism, and paranoia that Russian media propagates is troubling. As seen with the rise of ISIS and other extremist groups, an ideology of hatred does not have to be mainstream to be dangerous.

By Liz Wahl, the Institute for Statecraft