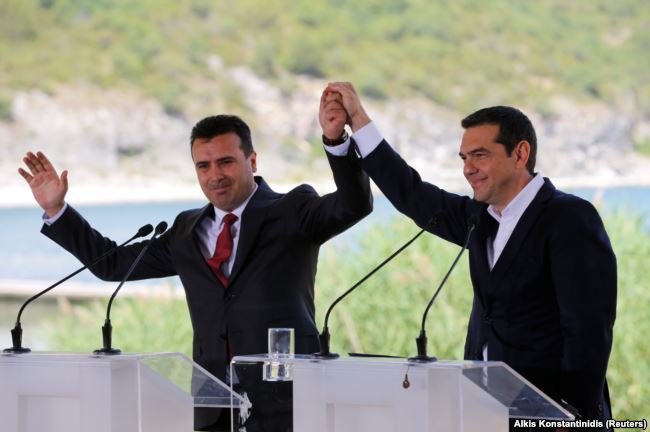 Polygraph.info has used North Macedonia as the shorter version of the new official name of the Republic of North Macedonia. Since the new name came into force on February 12, 2019, we have used the earlier name Macedonia for past events and prior quotations.

Contrary to Kremlin’s assertion that North Macedonia is a small country of little strategic importance to NATO, Moscow has invested substantial efforts to undermine Skopje’s prospect of joining the Western defense alliance. However, the Kremlin has failed in its latest subversive mission in the Balkans, decisively defeated by Skopje and Athens, whose determination to end an old name dispute has reinvigorated the region’s Western integration.

A chance to resolve the name dispute finally emerged when the Macedonian and Greek foreign ministers, Nikola Dimitrov and Nikos Kotzias, respectively—in the presence of their countries’ prime ministers, Zoran Zaev and Alexis Tsipras—signed a landmark agreement on the shores of Lake Prespa on June 17, 2018. The deal involved changing Macedonia’s name to North Macedonia in exchange for Greece’s full support for its northern neighbor’s NATO and EU accession, as well as recognition of the Macedonian nation and Macedonian language.

Remarkably, and despite nationalist opposition at home and Russian interference, both governments stuck to the deal, systematically taking each step to make it a reality. On February 12, when Macedonia’s name change to North Macedonia came into force, the NATO flag was raised in front of the government building in Skopje. The NATO accession protocol, signed in Brussels on February 6, must be ratified by all 29 members of the alliance. The process will likely take several months or a year, during which time Russia is expected to continue attempts at destabilizing the country.

Indeed, Russian officials were quick to claim that by becoming a NATO member, North Macedonia will lose its ability to pursue its own foreign policy. Russian Foreign Ministry spokesperson Maria Zakharova also warned that Skopje will have to pay for NATO’s patronage “…by increasing its defense spending and by taking part in military preparations and operations that have nothing to do with the interests of the people of Macedonia; moreover, it will be unable to conduct a truly sovereign foreign policy.”

Konstantin Kosachev, chairman of the Foreign Affairs Committee of the Federation Council, the upper house of Russia’s parliament, stated that “joining NATO would bring nothing good either to Macedonia or to the European community.”

“This is more of a symbolic than a practical step, because it is about a small country that does not have any importance to NATO. But this, however, is important for the Alliance given the collision with Russia, which constantly points to the destructive role of NATO as a remnant of the Cold War,” Kosachev told the centrist Nova Makedonija newspaper.

Damir Marusic, the executive editor of The American Interest magazine, told Polygraph.info: “I expect the [Russian] assault to continue. Any hiccups in the implementation of Prespa, or in NATO accession, allows Russia to portray the alliance, and the West in general, as a paper tiger. There is no reason to become less vigilant and active in fighting Russian efforts now just because Prespa is coming into force. On the contrary, the game is just starting.”

According to Marusic, the Kremlin’s objectives “have little to do with North Macedonia qua North Macedonia, and rather operate on the principle of ‘anything that’s a headache for the West is a good thing’.”

“Their main objective is to cause as much trouble as they possibly can,” concurred Daniel Serwer, a professor at the Johns Hopkins University School of Advanced International Studies. “I don’t think they ever really expected to stop Macedonia’s NATO accession, but they like to cause trouble for NATO as they see NATO as the enemy.”

​Moscow, however, appears to have devised a long-term strategy for limiting Euro-Atlantic integration and increasing Russian influence in the Balkans. Leaked intelligence reports from Skopje have detailed elaborate tactics used by Russian officials, military intelligence officers, Kremlin’s ideologues, Russian government-sponsored cultural organizations and media outlets, social media influencers, and even the Orthodox Church, to cast a wide net of subversion and disinformation over Macedonian society. Furthermore, the intelligence reports point to a campaign run from the Russian embassy in Skopje, but coordinated by the Russian foreign intelligence service (SVR) center in Belgrade and the Russian military intelligence service (GRU) center in Sofia—an extensive institutional structure for merely aiming to “create trouble” for NATO.

A Decade of Subversion and Disinformation

Kremlin propaganda directed against NATO expansion is nothing new for Skopje and Athens. According to intelligence reports obtained by investigative journalists in Skopje in 2017, Macedonia had been “undergoing strong subversive, propaganda and intelligence activity implemented through the Embassy of the RF [Russian Federation].” This policy has been in line with Moscow’s strategy of obstructing NATO integration and creating frozen conflicts in the region. The campaign started after NATO’s Bucharest Summit in 2008, when Macedonia’s invitation to the alliance was blocked by Greece.

The intelligence reports stated that Russia’s main purpose was to isolate Macedonia from Western influence and secure the country’s military neutrality as part of a larger strategy of creating a military neutral zone in the Balkans. In fact, Vladimir Putin’s United Russia party initiated a regional platform for “the creation of a militarily neutral territory in the Balkans” by signing a cooperation agreement in June 2016 with several pro-Russian and anti-NATO parties from Serbia, Montenegro, Bosnia and Herzegovina, Macedonia and Bulgaria. From Macedonia, only the small Democratic Party of Serbs was present at the signing, but its head also chaired the parliamentary committee for cooperation with Russia at the time.

Russia’s subversive policy, implemented through diplomatic channels and through energy dominance, also uses soft power, such as the media and cultural institutions. It aims to strengthen Macedonia’s pan-Slavic and Orthodox Christian affiliation, placing it “in a state of exclusive dependency on Russian policy.”

According to the Prague Security Studies Institute, Russia in recent years has established over 30 Russo-Macedonian cultural associations, funded the construction of Orthodox churches, sponsored local media outlets, and increased its embassy personnel by 25%. In addition, it has attempted to coerce government ministers and court pro-Russian political parties.

The last seven months have seen heightened activities aimed at preventing the implementation of the Prespa agreement. They included a massive disinformation campaign led by state-owned Russian media outlets such as Sputnik and Russia Today, social media agitation and trolling, Russian businessmen financing various groups to incite violent protests against the name deal, and intense interference in internal affairs by Russian diplomats.

In June 2018, Athens expelled two Russian diplomats for their attempts to undermine the agreement with Skopje, while Macedonian Prime Minister Zaev disclosed an elaborate scheme financed by Russian businessmen to disrupt the September referendum on changing the country’s name.

In addition, the NY Times says the US Congress allocated USD 8M to the fight against #Russia-n disinformation in #Macedonia. “But the money did not arrive for more than a year, and it has yet to be effectively deployed”. #Balkans #referendum https://t.co/fqN9EVKFJa

The Investigative Reporting Lab Macedonia reported that Greek-Russian billionaire Ivan Savvidis, a former deputy in Russia’s State Duma from the United Russia party who resides in Greece, has given at least 300,000 euros ($347,000) to Macedonian anti-NATO and anti-name change activists. The recipients include Macedonian politicians, newly established radical nationalist organizations and soccer hooligans from the Vardar club, who staged violent protests in front of the parliament in Skopje the day after the Prespa agreement was signed.

Vladimir Putin’s ideologue Alexander Dugin and his associates were also involved in undermining Skopje’s NATO aspirations. Voice of America’s Macedonian service reported that the key strategist in Russia’s information warfare in Macedonia was Leonid Savin, a close associate of Dugin and proponent of the Eurasian Union. Savin provided training to the United Macedonia party, a small pro-Russian formation opposing the name change deal.

The Kremlin dispatched to Macedonia the same instructors it used in its hybrid war before the annexation of Crimea and in the subsequent destabilization of Ukraine’s Donbas, as well as in the attempted coup in Montenegro in October 2016.

The Russian disinformation campaign used in North Macedonia indicates that Moscow has assessed the country’s weak points and popular sentiments in an attempt to dissuade Macedonian society from joining NATO. But since support for NATO membership has been always extremely high (as high as 92% back in 2008 and down to 71 % in 2017), Russian disinformation has focused on stoking a strong patriotic sentiment among those Macedonians who are unwilling to join the EU and NATO at the price of changing their country’s name.

Along with the claim that North Macedonia is a small and irrelevant country for NATO and the EU, Russian officials have also said that U.S. President Donald Trump’s criticisms of NATO have prompted Brussels to demonstrate that the alliance is in good shape and continues to expand. Kosachev apparently put the cart before the horse in making this claim, as North Macedonia applied to be a NATO member, not the other way around.

Among the official Russian messages are warnings that Macedonia would be unable to make sovereign foreign policy decisions and even threats that the country would become a target in case of a NATO-Russia conflict. Russian Ambassador to Skopje Oleg Shcherbak famously threatened in March 2018: “If it came to a conflict between Russia and NATO, you will have the role of a legitimate target.”

Russian Ambassador to Macedonia, Oleg Shcherbak: “In case of an eventual war between Russia and NATO, Macedonia will be a legitimate target.” https://t.co/UdZKL93ioL via @meta_agency #Macedonia #Russia #NATO

Sputnik was even more explicit, stating that Macedonia could become “cannon fodder” if U.S. bases were stationed in the country with missiles pointing at Russia and war were to erupt between Russia and NATO.

“Macedonia wants to join the EU when others are leaving, like the smart Englishmen,” said a News Front website commentator, who also claimed that the Poles are gaining control over the EU.

But the most dangerous messages coming from Russian officials are the ones inciting ethnic discord in Macedonian society. During Macedonia’s prolonged political crisis in early 2017, the Russian foreign ministry alleged that the EU is accepting the “Tirana Platform,” which would lead to the federalization of Macedonia and the creation of “Greater Albania.” Both claims were false, as the December 2016 meeting in Tirana of Albania’s Prime Minister Edi Rama and Foreign Minister Ditmir Bushati with representatives of three of the four main Macedonian Albanian parties did not result in any federalization plans. Nevertheless, the “Tirana Platform” has become a scarecrow of Moscow’s propaganda anytime ethnic Albanian grievances or aspirations are being discussed.

Russian propaganda also treats the Albanians in Macedonia as migrants, not as an indigenous population. It has gone as far as to urge the deportation of Macedonian Albanians, just like “dedushka” Stalin did with ethnic minorities in the Soviet Union.

The extent of Moscow’s subversion operations in North Macedonia and Greece suggests that the region is of high importance for the Russian government. Sustaining a ten-year long intelligence and disinformation campaign requires large financial and human resources.

Damir Marusic considers the disinformation efforts “reasonably successful,” because “the referendum in Macedonia failed to cross the threshold, and politics in Greece remain very polarized on the issue.” But Daniel Serwer thinks that “[T]he Russians have failed in both Greece and Macedonia. But they tried hard, they made some trouble and they will continue to try and make trouble.”

The NATO flag flying in the center of Skopje does not put an end to Moscow’s struggles to maintain relevance in the Balkans. In fact, the ongoing dialogue between Kosovo and Serbia and potential revisions to the Dayton Agreement in Bosnia-Herzegovina will provide fertile ground for a new wave of Russian propaganda and agitation in the region.