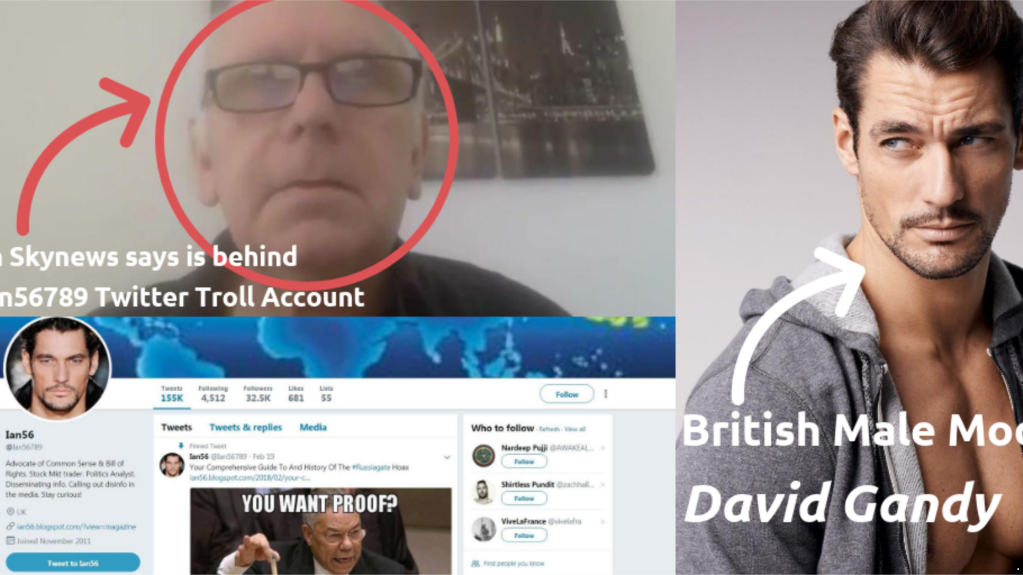 It seems that not only were rumors of Ian56‘s (@Ian56789) Twitter “death” (suspension) on Thursday exaggerated, but on Friday afternoon the world became acquainted with the real man behind the Twitter account with over 32,000 followers. And contrary to what you see in his profile pic, he’s not male model David Gandy.

The British outlet Sky News managed to track down a British man who said he was responsible for the Ian56 account. He gave his name as Ian, but without a surname.

In an article by The Guardian, Ian56 had been incorrectly labeled as a Russian “bot,” a type of automated account that randomly retweets and likes other tweets on the platform. Experts, however, labeled the account as a “troll” and not a bot based on its activity and behavior such as using a fake profile pic, unnatural use of English, and a bio that contradicted many of his tweets..

If the Ian on Sky News really is behind Ian56, then Ian56 isn’t the creation of an employee of the St. Petersburg-based Internet Research Agency, better known as the “troll factory.”

Ben Nimmo, of the Atlantic Council’s Digital Forensic Research Lab which previously tracked the account’s activity, explained that by calling the account a bot, some media outlets and authorities actually helped Ian.

“Anyone who calls him a Russian bot is just handing him a propaganda win,” Nimmo told Polygraph.info. He’s a pro-Kremlin troll. “Not, as I suspected, a troll factory account. But a troll. People really, really need a lesson in what bots are,” said Nimmo.

On the other hand, the person behind the account, if it is the “Ian” on TV, apparently fooled the experts who thought they had the account pegged.

@Ian56789 Please send us your CV, any other identifying information as you have been identified by the Atlantic Council as a Russian troll. We are writing and offer you a response. [email protected]

I think someone is not very happy we exposed he/she’s been involved in many disinformation operations in the past two years.
News story here: https://t.co/wieFbxnYB4 pic.twitter.com/PjHhRr4P1q

“I am speaking for the vast majority of British people, 59-point-9 million out of 60-million English people,” said Ian on the Friday evening Sky News broadcast.

Alistair Bunkall of Sky News told Polygraph.info the operator of “Ian56” agreed to an interview by direct message, using a code to identify himself before the network went live via Skype. The network did not include his surname.