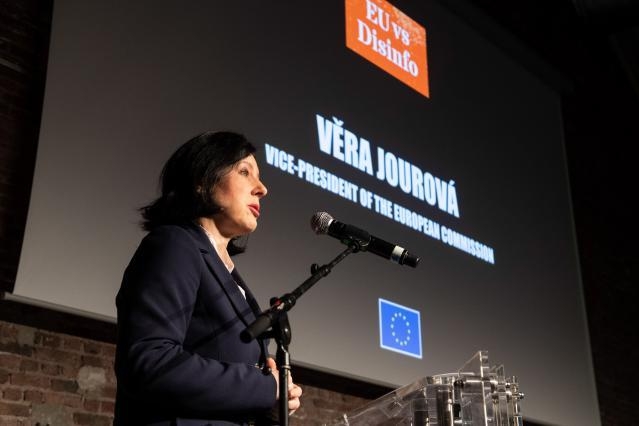 Last week, international experts on countering disinformation gathered in Brussels to discuss the development of the issue. Disinformation, as a part of a wider aggression against EU and the Member States, is a challenge the union is determined to address.

The meeting was opened by EU Commission Vice-President Věra Jourová, who in her speech underscored disinformation’s threat to democracy:

There are specific external actors – namely Russia, and increasingly China – that are actively using disinformation and related interference tactics to undermine European democracy, and will continue doing so until we demonstrate that we will not tolerate this aggression and interference.

The EU vs Disinfo conference was organised by the European External Action Service’s Division for Strategic Communications. Its purpose was to discuss how the threat of disinformation is developing. How new actors and new technologies appear, and how to maintain a democratic public discourse, based on facts and mutual respect.

Visions for a “good Internet”

The EU action plan against disinformation identifies disinformation as part of a wider hybrid aggression against EU and the Member States. This was emphasised by several of the participants. On the question of how to move forward, tackling new threats and means of malign interference, panelist Alex Krasodomski-Jones, director of the Centre for the Analysis of Social Media, CASM, underscored the necessity of understanding not only the threat, but also what we want to achieve:

The problem stems, in my view, from a lack of vision. Without a vision we cannot move on. What are we fighting for?  What does good look like? As long as we don’t know what “good Internet” looks like, we can’t fight “bad”.

Sebastian Bay of the Swedish Defence Research Agency, saw a necessity in investing in regulatory mechanism to curb the use of manufactured interaction on social media:

The models invented for disinformation can be used by anyone, against anyone. It’s cheap, effective and the operator faces no risks. Why not use it? We must improve transparency; demonstrate who makes money on this. As long as fake accounts and fake interactions add to the value actors will be reluctant to address the issue. If we’re going to regulate an industry that earns hundreds of billions we need to invest billions of euros. We need to invest!

The conference was the first of its kind, organised by the EEAS’ Division for Strategic Communications. The head of the division, Lutz Güllner described the vision:

Disinformation is a threat to our democratic institutions. It undermines them, creates mistrust. The EU has been at the forefront of efforts to combat it. Looking specifically at pro-Kremlin campaigns. The EU is a thought leader in this field and has created new instruments to address the issue. We must understand the new technical possibilities to manipulate the public space, and identify the new actors.

Neither disinformation nor hybrid threats are new concepts. EU Commission Vice-President Věra Jourová related to the poisoned public discourse of her childhood in communist Czechoslovakia, and referred to the fact that totalitarian regimes always have employed false statements, lies, and disinformation to attack democracy:

One of the main objective of our enemies is not to convince us to their facts, but undermine credibility and show that democracy is no better that other regimes. This is not a new method. Let me quote Hannah Arendt here: “The ideal subject of totalitarian rule is not the convinced Nazi or the convinced Communist, but people for whom the distinction between fact and fiction and the distinction between true and false no longer exist.”