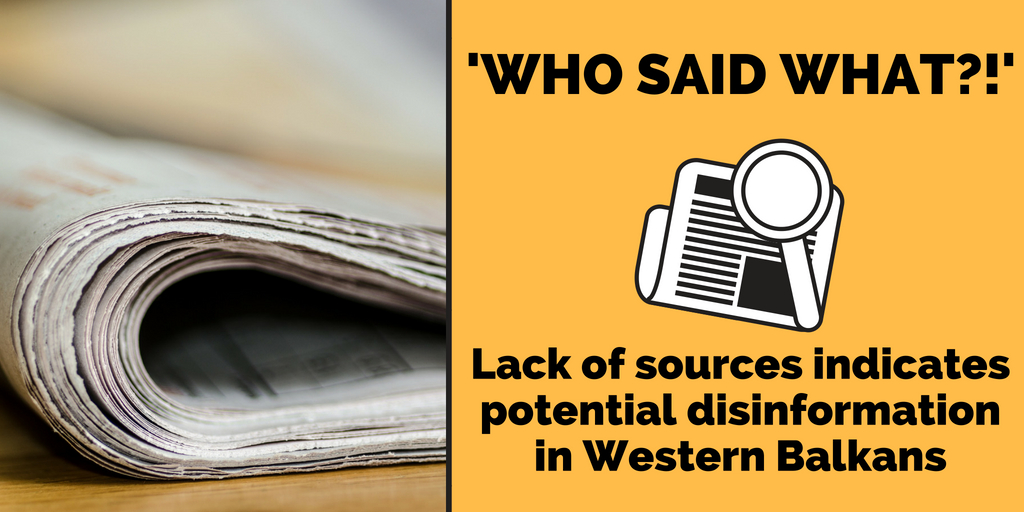 One key feature of disinforming news stories is that they are most often published without quoting any sources, alongside having a biased or subjective tone. In the Western Balkans, the largest number of news articles without sources has been seen in Serbia, while news pieces quoting ‘unnamed sources’ were most common in the Former Yugoslav Republic of Macedonia. These are some of the findings of a one month regional monitoring project run by the Belgrade-based civic association CRTA.

A regional analysis of media reporting in the Western Balkans carried out by the Belgrade-based Centre for Research, Transparency and Accountability (CRTA), in the period from May 14 to June 10, showed that approximately one third of media reports about international actors in Serbia did not mention any source for their news, thus creating a basis for potential disinformation. And the majority of them carried pro-Russian and anti-US stances.

In monitoring leading media in four countries (Serbia, Montenegro, Bosnia and Herzegovina and the Former Yugoslav Republic of Macedonia), CRTA focused on the portrayal of international actors (the EU, USA, Russia and NATO). As a first indicator of disinformation they considered news articles that contained information without mentioning sources. The monitoring showed that Serbian media were leading with 33 % of such articles/news pieces, while the most articles (43%) with unnamed sources were found in the media in the Former Yugoslav Republic of Macedonia.

Further research showed that in Serbia among the news content that did not quote sources, the dominant tone was pro-Russian and anti-US. In Bosnia and Herzegovina (BiH), most of such content was anti-US and pro-EU. Only in Montenegro and the Former Yugoslav Republic of Macedonia in the period analysed was some pro-US media content noted, i.e. 31% and 26% respectively.

In general, while the presence of pro-EU commentaries and EU-neutral news content varied from 19 to 25 % in BiH, FYROM and Montenegro, CRTA highlighted that in Serbia the EU-neutral news content dominated (at 27%). Pro-EU reporting is significantly lower compared to other countries in the region, and is almost equal with pro-Russian content (14%).

In terms of main topics addressed in the media content about the international actors, the research found that politics is a top topic in all the surveyed countries. This is followed by either the military (Montenegro, FYROM), the economy (BiH) or Kosovo (Serbia).

“To be able to efficiently counter disinformation, it is necessary that media and journalists double check data and their sources instead of only transmitting information”, Vukosava Crnjanski, Director of CRTA said at the presentation of the report on 28 June in Belgrade. “In addition, decision-makers and institutions should initiate media literacy programmes, and citizens themselves should read through the news and check sources before they share it on social media.”