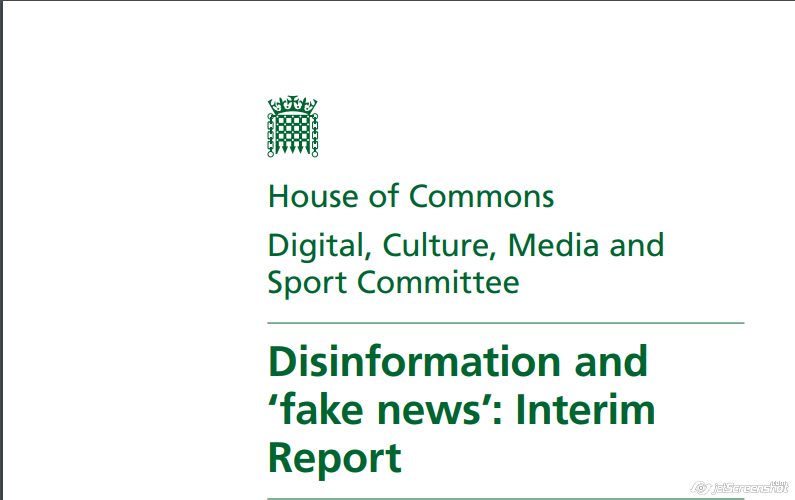 By authority of the House of Commons of UK Parliament

Fifth Report of Session 2017–19
Report, together with formal minutes relating
to the report
Ordered by the House of Commons
to be printed 24 July 2018

There are many potential threats to our democracy and our values. One such threat arises from what has been coined ‘fake news’, created for profit or other gain, disseminated through state-sponsored programmes, or spread through the deliberate distortion of facts, by groups with a particular agenda, including the desire to affect political elections.

Such has been the impact of this agenda, the focus of our inquiry moved from understanding the phenomenon of ‘fake news’, distributed largely through social media, to issues concerning the very future of democracy. Arguably, more invasive than obviously false information is the relentless targeting of hyper-partisan views, which play to the fears and prejudices of people, in order to influence their voting plans and their behaviour. We are faced with a crisis concerning the use of data, the manipulation of our data, and the targeting of pernicious views. In particular, we heard evidence of Russian state-sponsored attempts to influence elections in the US and the UK through social media, of the efforts of private companies to do the same, and of law-breaking by certain Leave campaign groups in the UK’s EU Referendum in their use of social media.

In this rapidly changing digital world, our existing legal framework is no longer fit for purpose. This is very much an interim Report, following an extensive inquiry. A further, substantive Report will follow in the autumn of 2018. We have highlighted significant concerns, following recent revelations regarding, in particular, political manipulation and set we out areas where urgent action needs to be taken by the Government and other regulatory agencies to build resilience against misinformation and disinformation into our democratic system. Our democracy is at risk, and now is the time to act, to protect our shared values and the integrity of our democratic institutions.

By authority of the House of Commons of UK Parliament