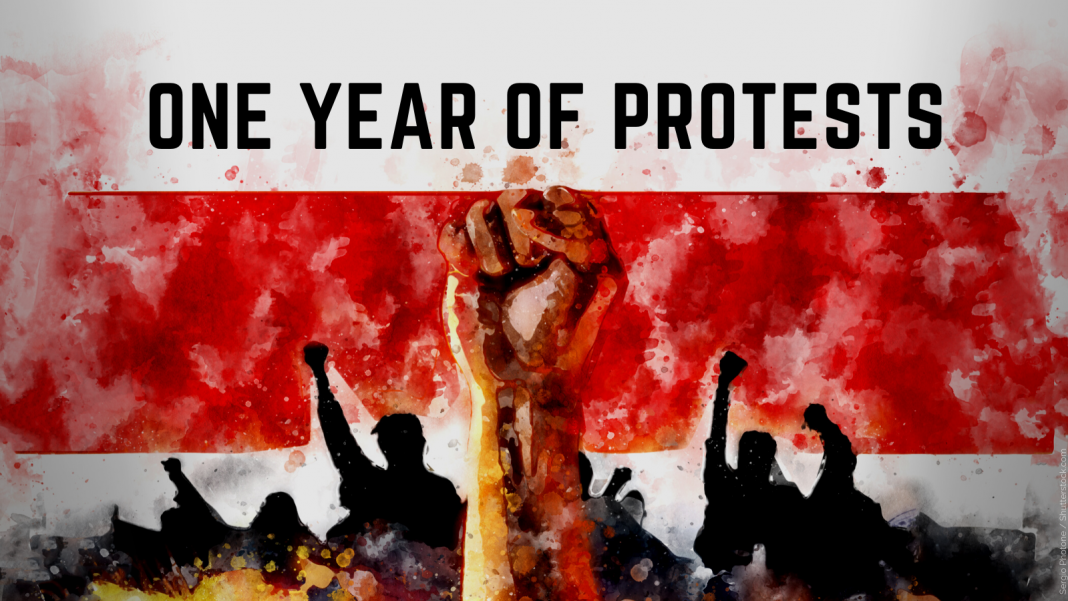 It has been a year since Belarusians took to the streets to protest the results of a rigged presidential election. The protests soon became the largest in the country’s history and were eventually violently supressed, with tens of thousands arrested, beaten and proseuted.

These brutal actions of Alyaksandr Lukashenka’s regime against the protesters, activists, journalists and Belarusian citizens more generally were accompanied with extensive disinformation campaigns.

Disinformation and blatant conspiracy theories continue to be used by the state-controlled media and regime’s proxies online to legitimise violence, undermine the protest movement and political opposition and silence critical voices, while independent journalists languish in prisons.

Since last August, EUvsDisinfo has collected over 450 examples of disinformation targeting democratic Belarus, illustrating just the tip of the iceberg of the state-controlled (dis)information machine.

These are some of the features of disinformation and information manipulation in Belarus we have observed this year:

Shortly after the outbreak of the protests, dozens of employees of Belarusian National State TV and Radio Company quit their jobs in protest against censorship and police brutality. Almost immediately they were replaced with “specialists” from Russian state-controlled media, who ensured that Belarusian state-controlled TV and radio could churn out disinformation narratives discrediting the protests and dismissing Belarusians’ civic and democratic rights.

Within weeks, the disinformation messages in Belarusian state-controlled and pro-Kremlin outlets were fully aligned, claiming that the protests in the country were engineered by the West; that the Belarusian opposition was controlled by foreign puppeteers; and that if the protesters had their way, Belarus would collapse. Eventually, the pro-democracy supporters were labelled extremists, terrorists and Nazi disciples.

Efforts to discredit the protests would go to ridiculous lengths, like the time when Alyaksandr Lukashenka claimed to have intercepted a phone call between “Mike and Nick” – alleged secret agents of the West straight out of a blockbuster movie. The stunt was intended to “prove” that the West was both behind the protests in Belarus and the Navalny poisoning, but instead provoked an avalanche of jokes online. Even the pro-Kremlin spin doctors were underwhelmed.

And yet, the pro-Kremlin media persisted in its support for Lukashenka, with the Belarusian state-controlled TV adopting not only pro-Kremlin disinformation narratives, but also its tactics and even the talking heads.

Monitoring by the International Strategic Action Network for Security shows that by the end of 2020, Belarusians had become a minority among the pundits on Belarusian state-controlled TV channels (and even those who appeared on TV were employees of state institutions or pro-Lukashenka organisations). Pro-Kremlin “experts” from Russia and other countries became a fixture on Belarusian airwaves along with statements and quotes from Russian diplomats and political and military leaders. Such a selection of speakers along with systematic destruction of independent media ensured that pro-Kremlin disinformation narratives, e.g., those undermining Belarusian statehood, have become mainstream in Belarus.

At the same time, Belarus has become the most dangerous country in Europe for media personnel, tumbling down by 5 positions on a global press freedom index in just one year.

Filmed under duress, Raman Pratasevich was forced to repeat the regime’s absurd disinformation messages for over four hours, in what can only be seen as an extension of the abuse and torture to which he was almost certainly subjected in detention. His “interviewer” was Marat Markov, the chairman of the state-financed ONT’s Management Board.

The most viewed edition targeted a Belarusian singer and former Eurovision contestant Angelica Agurbash. It was viewed over 218,000 times on YouTube.

Another host on the same state-run CTV channel, Alexei Golikov, compared protesting Belarusians to animals to justify inhumane and unsanitary conditions in places of detention: “I agree, for people these conditions of detention are unacceptable, but for animals perfectly normal”.[i] On another occasion he advocated shooting the knees of those who threw stones at “siloviki”[ii] – the strongmen of Lukashenka’s regime.

Such rhetoric is becoming increasingly normalised on Belarusian state-controlled channels, making them an accomplice to Alykasandr Lukashenka’s violence.

Given the systematic destruction of independent media in the country, Belarusians have increasingly turned to social media. The NEXTA Telegram channel, co-founded by the detained Raman Pratasevich, became the main independent source of information for millions of Belarusians. In retaliation, the Belarusian authorities declared NEXTA and its logotype “extremist materials” in Belarus.

Despite the crackdown (not to mention the arrest of Raman Pratasevich), NEXTA, currently with over 1.1 million followers, and several other Telegram channels remain important and independent sources of information in Belarus. A success that Alyaksandr Lukashenka’s regime, with all of its force and state-controlled media apparatus is unable to replicate, but not for lack of trying.

A regime-controlled Telegram channel, “Zholtye Slivy”, recently inaugurated the “initiative group of pro-governmental bloggers”, ostensibly to facilitate the spread of pro-Lukashenka disinformation messages online. Currently the popularity of these pro-government bloggers is quite limited online; e.g., the above-mentioned Alexei Golikov has just over 7,000 subscribers on his Telegram channel.

However, past instances when pro-government social media channels used forced confessions of political prisoners as paid advertising indicate to what lengths the regime can to go boost the popularity of its bloggers.

For an entire year now, despite the repression, the Belarusian people at home and in exile continue to demand their civil and political rights.

The Dirty Side of Advertising: Forced Confessions From Belarus on Youtube

Disinformation Means Treating a Deadly Disease with Vodka and a Tractor