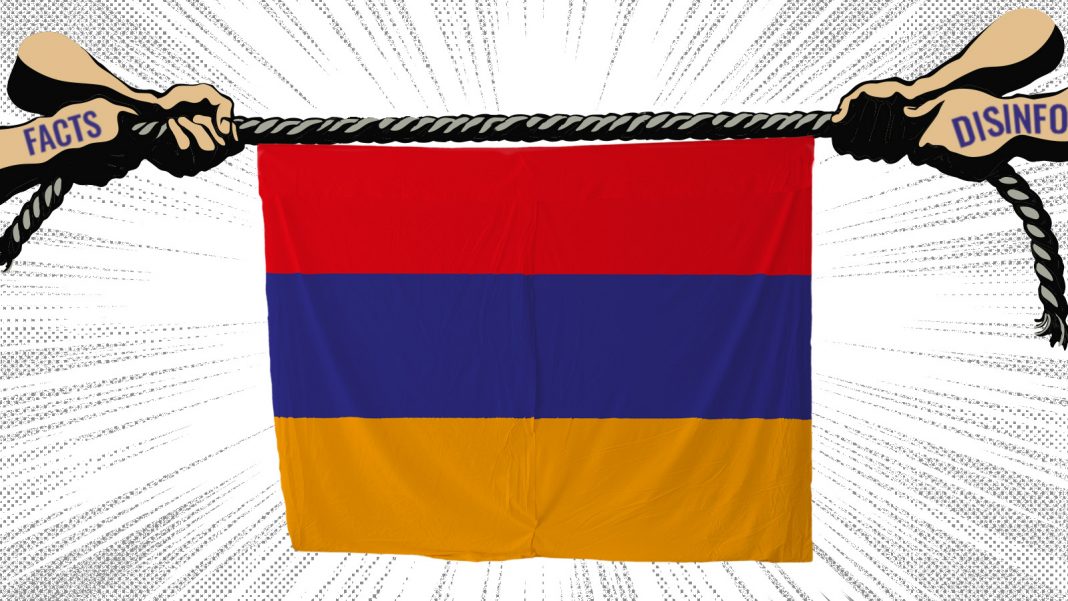 Disinformation is not a new phenomenon in Armenia, but it wasn’t always so extensive and so constantly present. After the Velvet Revolution in 2018, however, Armenia began to see a rapid proliferation of disinformation, with Covid-19 and the Nagorno-Karabakh conflict in 2020 further demonstrating Armenia’s vulnerability to information manipulation.

Disinformation narratives about Covid-19, the European Union, and the West in general, as well as those targeting values, social and cultural issues, are disseminated to increase distrust between citizens, Armenian authorities, and its international partners.

The role of the pro-Kremlin media in disseminating disinformation has increased significantly, particularly in Russian state-controlled TV channels (and online outlets) that operate in Armenia. Local broadcast media, news agencies and online media, which regularly republish RIA Novosti, RT, and others, are also central to the rapid dispersal of disinformation.

Studies show that even when covering international stories, local Armenian media prefer to republish Russian news sources. Their accuracy is rarely, if ever, checked. However, local fact-checkers are also working hard to debunk and curb the spread of disinformation (see also here).

Disinformation narratives targeting Armenia are as old and familiar as they are unfounded: the EU is undemocratic, Russophobic, divided and dependent on the US. The Eastern Partnership has exhausted itself, it has nothing new to offer, and its colonial goal to snatch member states away from Russia’s orbit. Furthermore, Armenia, like Azerbaijan and Belarus, has always been seen by the EU as an inferior member of the partnership.

While Armenian society is generally friendly towards Europe and the EU (due to large Armenian communities in various countries, as well as the European Union-Armenia Comprehensive and Enhanced Partnership Agreement), disinformation messages targeting the EU and the West spread during the Karabakh conflict in 2020.

Most criticism of the EU in Armenia centres on hostility towards so-called ‘Western values’:

‘Narratives about the EU are mainly spread through right-wing media. They target the EU more in terms of values. We must not forget the fact that Russia has great levers and means of influence to advance any anti-European narrative when needed.’

The West is allegedly depraved and perverted, and is ‘importing’ immoral behaviour into Armenia. According to disinformation outlets, Armenia has been under the control of LGBT groups since the 2018 velvet revolution, largely thanks to Soros and Western NGOs. False narratives about the Istanbul and Lanzarote Conventions, which aim to prevent violence against women and protect children from sexual exploitation and abuse, have become prolific in the last few years. The narratives claim the conventions contradict Armenian values, are a threat to children, and damage the integrity of families and the church.

For many years civil society has been a major target of pro-Kremlin disinformation outlets and their proxies. The Soros Foundation, in particular, is routinely accused of serving foreign agendas and destroying Armenia.

‘Attacks on civil society have existed. What makes us worried are the developments in Armenia, which sometimes seem to bring us closer to the Russian or Belarusian model, where CSOs [Civil Society Organisations] are labelled as foreign agents.’

Other false and widespread allegations include claims that the 2018 events were a ‘colour revolution’ organised by the West with the aim of removing Russia’s military base from Armenia and expelling Russia from the Caucasus. Iravunk, a disinformation outlet extensively represented in the EUvsDisinfo database, consistently promoted the narrative that so-called the ‘colour revolution’ in Armenia was organised by MI6 and the CIA, with the goal of weakening Russia.

Disinformation: a constant challenge to democracy

Widespread disinformation remains a constant challenge to democracy. There are more platforms and opportunities for spreading false narratives than ever before. The task of ensuring citizens receive accurate and verified information is therefore ever more important.