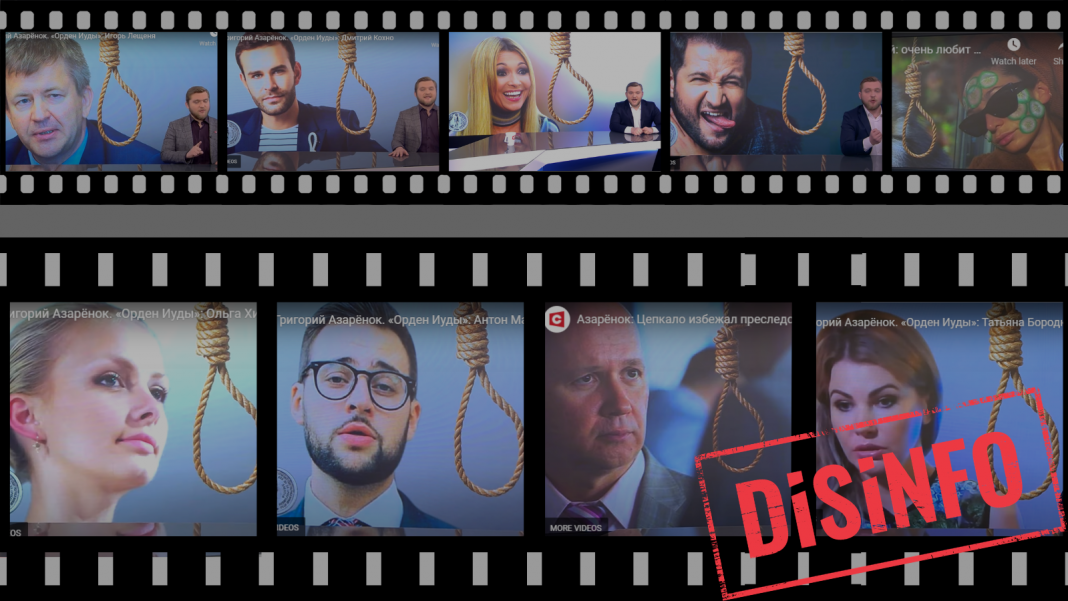 “Rats”, “degenerates”, “human abominations” – these are just a few ways in which Belarusian state-controlled TV describes opposition activists. As the Belarusian regime hardens its crackdown on political opposition, civil society and independent journalists, the rhetoric of regime-controlled media is becoming increasingly radicalised and borders hate speech.

Every Sunday night, a weekly panorama on Belarusian state-controlled CTV features a section ominously called the “Order of Judas”. Hosted by 26-year-old Grigoriy Azarenok, the section singles out and targets Belarusians who, according[i] to the state-controlled media, “are united in the sin of betrayal, who hate our state more than anyone else” and who “disgraced the very notion of being a Belarusian”.[ii]

The list of the so-called “regime traitors” is long and includes Belarusian opposition leaders, activists as well as social media influencers, singers and artists, journalists and media personalities, former regime officials and diplomats. Anyone who dared to speak out against the illegitimate President of Belarus, Alyaksandr Lukashenka, and his repressions is a target, subjected to personal denigration on prime-time TV.

The language used in the programme is not simply demeaning, it is dehumanising. The dissenting Belarusians have been called, amongst others, “vile reptiles[iii]”, “abominations of the human race[iv]”, “inhuman[v]”, “parasites and idlers[vi]”, “macaques[vii]”, “rats[viii]”, “jellyfish[ix]” “corpse-looking witches[x]”. Disturbingly, such monikers are accompanied with implicit threats of violence: every edition of the “Order of Judas” features a photo of a so-called “traitor” with a noose displayed prominently.

Every edition of “Order of Judas” is also accompanied by comments from a “psychologist”, suggesting, in the best traditions of the USSR, that protesting against the illegal regime is a mental disorder, rather than an expression of political will.

All editions of “Order of Judas” are available not just on the official CTV website, but also on YouTube. Although the platform has stated that content “dehumanising individuals or groups by calling them subhuman, comparing them to animals, insects, pests, disease, or any other non-human entity” violates its policies, all editions of “Order of Judas” are easily accessible and have been viewed over 270,000 times*.

The endless stream of pro-Lukashenka and pro-Kremlin disinformation targeting Belarusian dissidents and activists has laid a fertile ground for toxic and dehumanising rhetoric. Calling someone a “human abomination” would not be possible without an established disinformation narrative claiming that Belarusian opposition activists and dissidents are neo-Nazis, and that the protests against Alyaksandr Lukashenka were attempts to restore Nazism. In a similar manner, lashing out at “liberal filth[xi]” (including the Eurovision Song Contest – “bestiary of perverts, gay degenerates, AIDS-smelling trash[xii]”) would not make sense if not for years of disinformation denigrating European and liberal values.

Even the biblical motive of Judas is a reference to a prominent disinformation narrative alleging that the protests in Belarus were organised and financed by the West and that the Belarusian opposition is a well-paid Western “puppet”. The biblical references also have additional and more insidious aims: to provide disinformation and hate speech with a clout of righteousness, depict the regime’s brutal crackdown on its own citizens as a fight of good against evil, and justify the regime’s actions no matter the cost. Because ultimately, for the regime’s propagandists who believe in their own lies, this is a matter of survival. According to Azarenok:

“I am sure that if a coup d’état occurs […] : they will judge me and, perhaps, just kill [me] without trial and investigation. And this must be understood”.

The Path to Radicalisation

Since the first wave of protests against the illegitimate President Alyaksandr Lukashenka, Belarusian state-controlled media, aided by “media specialists” from Russia, have engaged in increasingly hostile rhetoric. Not only have the Belarusian state-controlled TV channels aligned their disinformation narratives with pro-Kremlin media, they have also adopted the same tactics, for example, harassing foreign diplomats.

While the pro-Kremlin media continue to denigrate Ukrainians by calling them “Banderovites”, the Belarusian media developed a similar demeaning moniker for the protestors, calling them “Zmagars”. According to Azarenok, “Zmagars are already beyond the bounds of good and evil, they are the abomination of the human race, they are soulless faceless creatures, simply demons[xiii]”.

Recent academic research shows that incivility, negativity and hate speech are most likely to occur in the false information that deviates furthest from reality. Belarusian state-controlled media seem to confirm the findings, using disinformation to dehumanise and denigrate dissidents and activists, thus eliminating any and all limits on the regime’s behaviour.

*The most viewed edition targeted a Belarusian singer and former Eurovision contestant Angelica Agurbash. It was viewed over 218,000 times on YouTube. Other editions gathered over 52,000 views cumulatively.