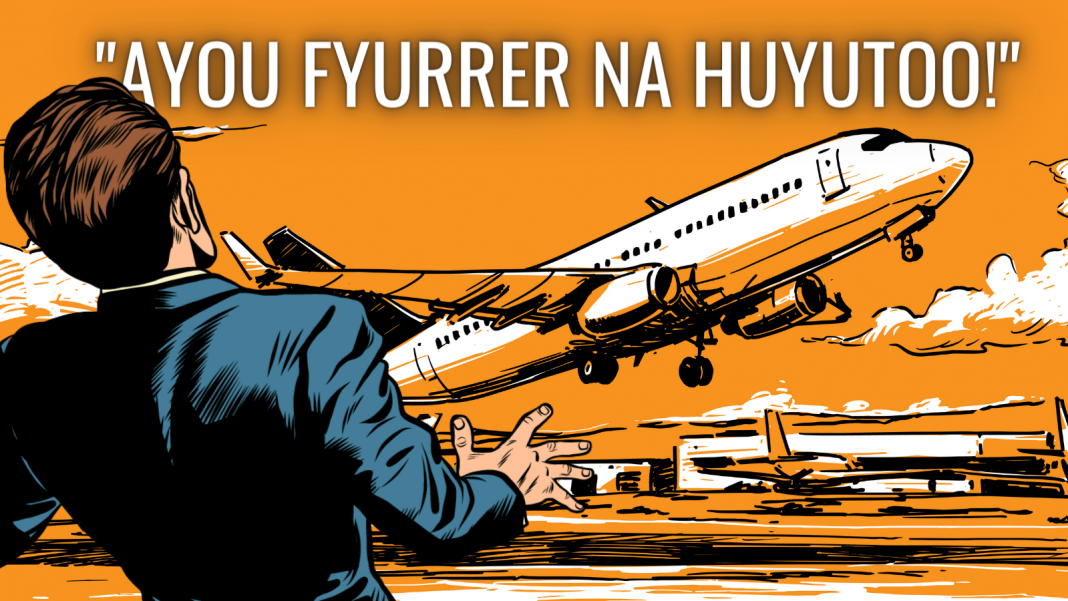 Detecting, documenting and debunking disinformation is usually a fairly straightforward job. The lies are extremely repetitive, the liars are almost always the same and debunking the umpteenth claim about Navalny as a NATO agent is – let’s be honest – just as much a copy-paste job as the actual lie.

This week we pass the 11,000 mark in our collection of pro-Kremlin disinformation messages, and we thought we’ve seen it all. “The Western Collapse”, “The Nazi-Liberal Conspiracy”… The lies are always the same. But bang, this week we stumbled into an entirely new level of disinformation.

In a story where the outlet 78.ru exclusively reports that one of the expelled diplomats left Russia flying economy class! Imagine that! A Foreigner! A Diplomat! In Economy Class! Anyway, the article leads to a dramatic punchline when the Swedish diplomat replies, explaining everything:

In Latin transcription: Ayou fyurrer na huyutoo! The article ends here. How dares he profane the airport of St. Petersburg with such a language?

And here we are. How do you debunk Ayou fyurrer na huyutoo?

“An unfounded claim?” “A recurring narrative?” “A conspiracy theory”. You won, ребята! We are entirely defenceless against this!

We did not expect the reapperance of the concept of Zaum language in disinformation. We did not anticipate the pro-Kremlin outlets to resurrect the memory of the transrational tongue of poets like Alexei Kruchyonykh (1886 – 1968). He, who in 1913 wrote :

This is the English translation from 2003 by Majorie Perloff. The Russian original is, of course, much more enigmatic. The Zaum language attempts to liberate poetry from the restrains of denotation of words. If you say “moon”, you are limited to the concept of the actual moon, the impressions of the moon, the literary heritage on the moon, etc. The Zaum movement inspired a generation of Russian painters in seeking images beyond reproduction of seen objects.

So far, disinformation has been limited to a certain cognitive realm; to a primitive rational dichotomy of false/true. You can always counter a lie. You can show facts to debunk a false statement. As long as a liar is using rational language, countering the false statement is bloody easy. If you say “Ayou fyurrer na huyutoo”, we, readers, create our own impressions. Some see a proof of Nazis attacking Russia in the “fyurrer”, distantly reminding of the German Führer; others suspect bad manners of foreign diplomats, suspecting in the “huyutoo” a hidden Russian obscenity; some might suspect that the diplomat says, in Swedish, to a friend that the flight departs from gate 407 [fewrandra-huu]. But in general, the lack of meaning in the Zaum language is the actual meaning.

It’s not fair, guys! How can we compete against Zaum poets like Velimir Khlebnikov and Igor Severyanin or artists like Olga Rozanova or Kazimir Malevich? Even Mayakovsky was at it in his poem (excessively fathomable for the Zaum purists) They don’t Understand Anything.

Mayakovsky gets the point, while not really making the Zaum language his own. We don’t understand anything! The Kremlin is weaponising the absurd and we stand here, like philistines, pathetically attempting to grasp the subtle Ayou fyurrer na huyutoo.

Our only chance now is to set up a Stratcom Task Force Dada. Europe cannot afford lagging behind in the Nonsense Race: Cам аю фюррер на хуйоттоо! You are ayou fyurrer na huyatoo!