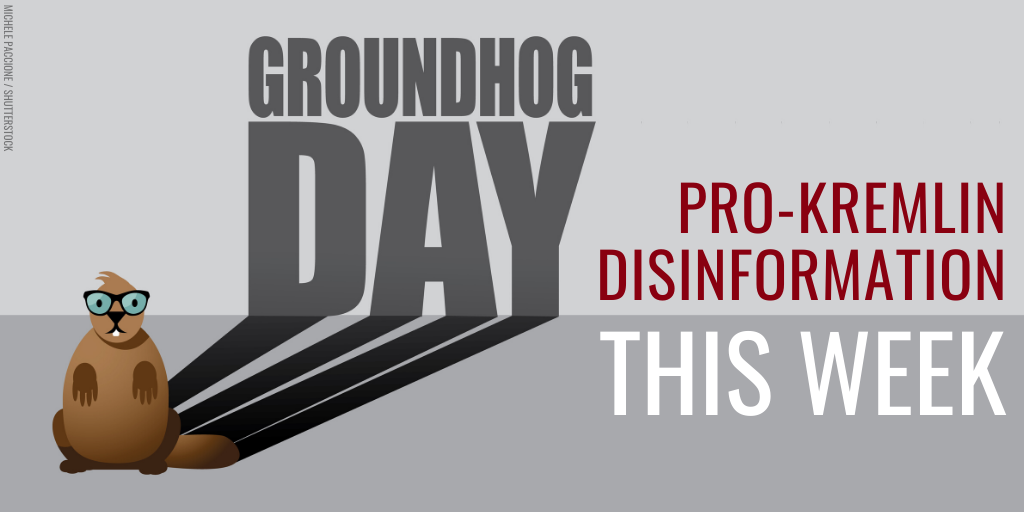 It is Groundhog Day in the world of pro-Kremlin disinformation, with WWII revisionism and the coronavirus continuing to dominate our disinfo caseload this week.

According to Punxsutaney Phil, the world’s most famous groundhog, winter will be ending early this year. Unfortunately, the same cannot be said for the Kremlin’s persistent disinformation efforts surrounding World War II and the coronavirus outbreak – shadows that even poor Phil the groundhog couldn’t possibly ignore.

The Kremlin’s historical revisionism about World War II and the Holocaust shows no signs of losing steam, with disinformation outlets accusing just about everyone (except obviously) Russia of distorting the truth about the war: Ukraine’s President Zelenskyy, the Baltic States, and naturally the worst offender of all, Poland.

Among their many sins, the Poles supposedly courted Hitler’s favour and helped plan the Jewish genocide, and now continue to ignore facts and civilized discussion that challenge Poland’s self-serving version of history. Best of all: while making these entirely unfounded accusations, the pro-Kremlin media actually has the audacity to describe itself as producing “precise and objective reporting on WWII events“. Yes, even as it publishes stories like this – because #noshame #sorrynotsorry.

Meanwhile, the coronavirus outbreak has been a major theme for RT and Sputnik – roughly one-tenth of their coverage worldwide was devoted to the topic between 20 January and 2 February. On 31 January, this reached a peak of 498 articles published in a single day. The intensive coverage on the RT and Sputnik websites was also reflected in their social media output. By volume of output, target audience and overall traction, we saw that the highest number of articles targeted Arabic speakers, followed by Spanish, English and Russian speakers. On Twitter, one of RT’s accounts in Spanish – RT Última Hora – actually made it to the Top-20 accounts globally, along with the official accounts of the World Health Organisation and CNN International.

Messages about the coronavirus in Russian underperformed significantly on social media. But this doesn’t mean that Russian-speaking audiences were not subject to disinformation about the virus. In fact, it appears that the main channel for stoking fear and advancing conspiracy theories in this case is Russian TV (as reflected in our database).

Given that we are all concerned about the spread of the virus and its ramifications, it is not the least bit surprising that pro-Kremlin outlets devote a lot of attention to the issue. After all, their average volume matches the level of coverage by Western media. However, unsurprisingly, the messages pushed by pro-Kremlin actors differ significantly from those published by reliable sources. Last week’s Disinformation Review already documented numerous false messages related to the coronavirus, which systematically play on basic human emotions like fear and concern for one’s health and wellbeing. This week, the database has been “enriched” by 15 new cases on the topic in 4 languages.

In addition to repeating false claims already seen last week – e.g., that the coronavirus is an American biological weapon, part of the United States’ war against Russia and China, or an instrument of Big Pharma – the pro-Kremlin disinformation machine also got more creative. Apparently, the coronavirus was stolen from a Canadian laboratory by Chinese spies, sponsored by both Bill Gates and George Soros (because of course it was!), and prophesied way back in the 1970s by blind Bulgarian psychic Baba Vanga.

With seemingly endless possibilities for conjuring fantasy horrors and conspiracy theories, the coronavirus is a gift that keeps on giving for purveyors of disinformation. And while the virus continues to dominate the news cycle, we should expect the accompanying disinformation arc to continue in tandem. Like with the Notre Dame fire last April, the pro-Kremlin media has demonstrated once again that it is always shamelessly and opportunistically ready to jump on any tragedy and exploit it for its own ends.