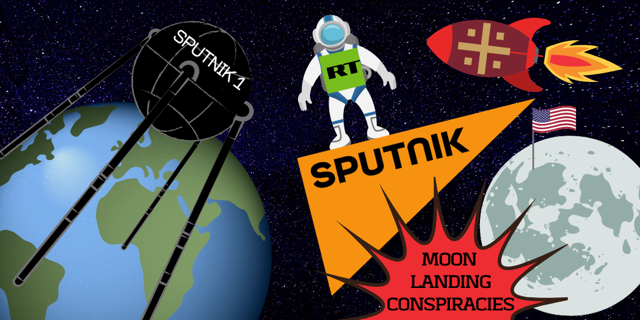 In 1957, the Soviet Union launched the first ever Sputnik – the artificial Earth satellite – into an elliptical low Earth orbit. And the world has never been the same since.

The launch had a direct impact on the United States’ decision to create NASA and the beginning of the Space Race. Some argue that the Moon landing wouldn’t have happened if Sputnik hadn’t been launched.

With a name bearing such significant legacy, Sputnik – the pro-Kremlin disinformation outlet, operating now in over 30 languages – has a lot to prove. And it has been proving its allegiance to the Kremlin and pro-Kremlin messaging since its establishment. It can hardly come as a surprise that the 50th anniversary of the Moon landing, which we celebrated on July 20, was used by Sputnik, RT and other pro-Kremlin outlets, all of whom were over the moon to revisit conspiracy theories and narratives that have been around for 50 years: namely, that the Americans did not land on the Moon at all.

In the last month, different versions of RT and Sputnik devoted – yes! – space to conspiracy theories about the Moon landing, which received over 6,200 engagements (shares, likes and comments) on Facebook and Twitter. The article from this batch which got the most attention (over 2,800 Facebook engagements on July 22) was published on RT Arabic, which used a filmmaker’s statement to provide actual “evidence” of the “falsification” of the landing. Other outlets warned us of future fakes – according to Tsargrad, new American missions to the Moon and Mars will be staged just like the one back in 1969. Well, if the new missions really were to end the same way Apollo 11 finished its task, we should all keep our fingers crossed!

The Darker Side of the Moon

But if you think the Moon landing was the main point of interest for the pro-Kremlin media this week, take your protein pills and put your helmet on – and read on (and if you didn’t think that, read on anyway!). After all, it is not the Moon, but Ukraine that is the biggest disinformation battlefield of all. 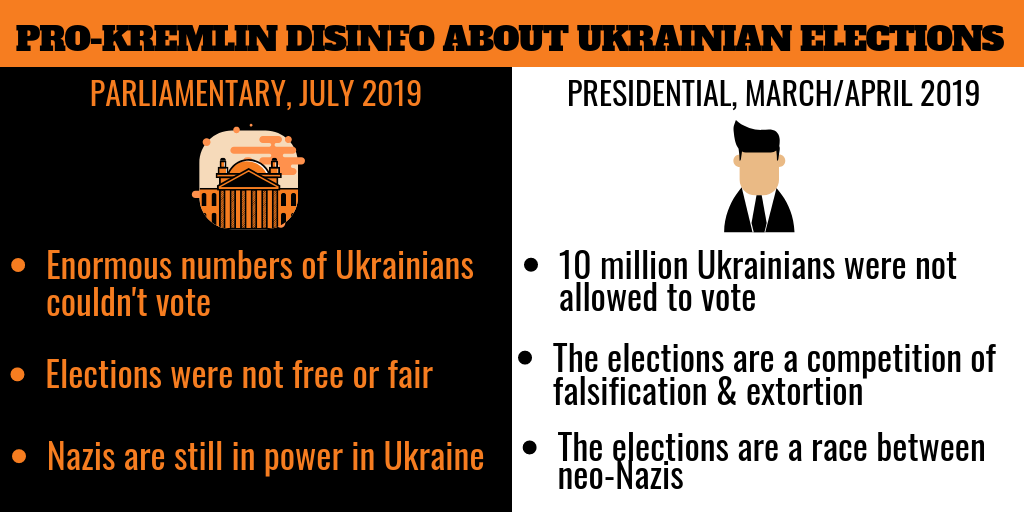 On Sunday, Ukrainians voted for their new parliament, in an election that – despite a few shortcomings – international observers deemed efficient and respecting fundamental freedoms. However, that did not convince the pro-Kremlin media. As the results of the exit polls were still coming in, disinformation channels claimed that the elections were neither free nor fair and suggested not recognizing their results. Pro-Kremlin media also accused Ukraine of not allowing phenomenal numbers of Ukrainians to vote, omitting the fact that due to continuing acts of aggression by Russian armed forces and the illegal annexation of Crimea, voting could not take place in the peninsula or the regions controlled by illegal armed groups. By contrast, international observers welcomed Ukraine’s efforts to make it easier for internally displaced persons to vote.

If all this sounds a bit familiar – well, it should. Pro-Kremlin media do not shy away from recycling the same narratives. Thus, disinformation messages that we observed before the Ukrainian presidential elections resurfaced again, with the same aim – to undermine the legitimacy of Ukraine’s electoral process and its democracy.

Notably missing from this latest litany of lies were the accusations of Ukrainian authorities staging provocations to sabotage the elections and their results that were abundant just a few months ago. It seems that in the eyes of the pro-Kremlin outlets, the role of chief agent provocateur was reserved specifically for the former president of Ukraine. However the drama element was still there, as one Russian state TV talk-show suggested that these were Ukraine’s last elections. World War 3 is approaching, it claimed, and Ukraine will disappear in the flood of refugees. One can only hope that before WW3 comes, we all will be able to take refuge on the Moon…

As Major Tom was floating in a most peculiar way, the usual disinformation messages about who was to blame for Russophobia and interference floated through the information space. Recently pro-Kremlin media found new targets, resulting from the European elections and the new institutional set-up now being shaped. According to disinformation outlets, the European Commission president-elect, Ursula von der Leyen, is demonising Russia to demonstrate her assertiveness (as a gynaecologist and a woman (!) she has no other choice, they claim). In the same vein, the new members of the European Parliament were also accused of Russophobia – which they allegedly use to further their political careers.

This week, we could also learn (sic!) about the West dreaming of splitting Russia and interfering in the internal affairs of post-Soviet states. It’s a common disinformation technique to blame somebody else, most frequently the West, for the Kremlin’s own sins. And it cannot be emphasised enough that it’s Russia who started the war in Ukraine, has a track record of interfering in Georgia’s internal affairs, and that it is the Kremlin’s aim to sow discord and deepen divisions among Western countries. But these facts don’t stop the disinformation outlets from repeating these shameful messages.

As Anton Chekhov said, “Don’t tell me the moon is shining; show me the glint of light on broken glass.” Throwing empty accusations and promoting conspiracy theories is easy. Providing real evidence requires effort. But we should be able to do this, if we managed to send men to the Moon. And we think our spaceship knows which way to go.