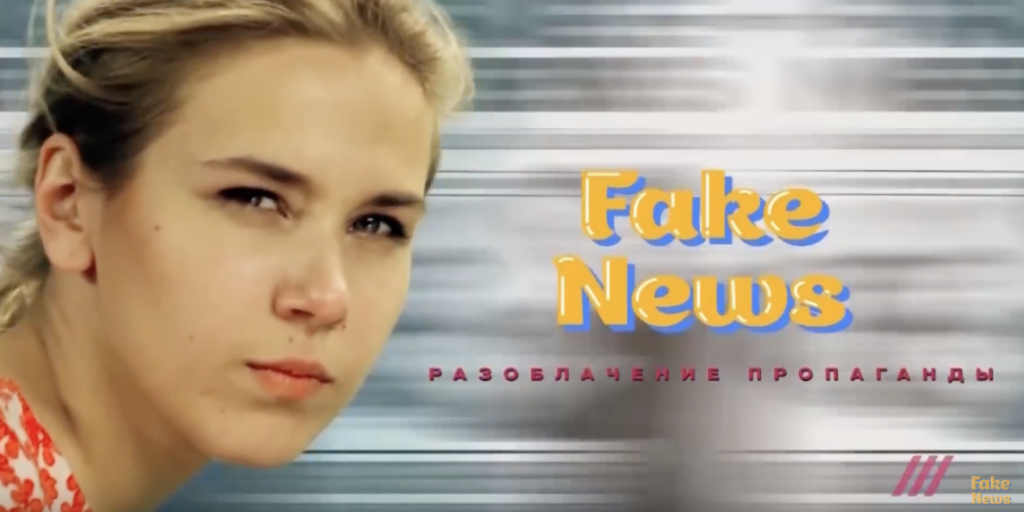 Maria Borzunova is a Russian journalist who works for the independent online TV channel TV Rain.

Together with her colleague Ilya Shepelin, she hosts a weekly programme on TV Rain called ‘Fake News’, which describes and debunks disinformation broadcast by the dominating, mainly state-controlled national TV channels.

In this exclusive interview, Maria Borzunova discusses why the disinformation is such a dominant feature on the large TV channels. She also explains how the national networks have reacted when TV Rain has exposed their disinformation. Finally, she shares her reflections about the degree of danger facing independent Russian journalists today.

Q. First a question about terminology. Your programme on TV Rain is called “Fake News”. Is this the term you prefer to use? Or how about other terms, propaganda or disinformation, for example?

A. Of course, we mostly talk about “fake news”; but in my opinion, propaganda is also part of fake news. I define the term “fake news” as an intentional lie, an intentional misrepresentation of facts, and as intentional propaganda as well. For us, fake news is a kind of comprehensive term, which is also why we used it to name the programme.

On top of that, this expression has been on everyone’s lips in recent years; politicians, for example, really like to use it, sometimes accurately, sometimes not very accurately, calling any news that they do not like “fake news”.

Maria Borzunova and TV Rain’s Fake News programme challenge the Kremlin’s top propagandists, such as Dmitry Kiselyov. In a recent episode they exposed Mr Kiselyov for his claim that “Russia is the world champion in free speech“.

“They only talk about problems in other countries”

A. Fake news, like propaganda, is mainly used for distracting the audience from the real problems that exist in the country – for example, to show that everything is much worse abroad.

We saw this during the protest rallies [in Moscow] this summer: when the police were treating the protesters very harshly, all the national channels showed how they disperse protests in Europe or America and what kind of punishment people get there.

In this way, they try to distract people’s attention from what is happening in their own country – real problems that are worth paying attention to and which really should be worked on. If they do talk about their difficulties inside the country, they are often not very accurate.

Q. Can you give an example of how you exposed a particular fake that appeared on the national TV channels, and what it led to? Have your exposures ever had concrete consequences?

A. Yes, we have had a number of such stories. First, of course, I recall the incident with the program ’60 Minutes’ [on the state TV channel Rossiya 1] after the shooting at the college in Kerch.

A young woman, allegedly an eyewitness to the event, was interviewed by telephone live on air, and she was introduced as Alina Kerova. But it soon became clear that it could not have been Alina Kerova, because Alina had died during the shooting and had been one of the first victims to be identified by relatives.

When we understood this, we called the [Rossiya 1] host Olga Skabeeva, and the editors of the program responded, though not on air, but on their social network profiles: they said that the young woman had introduced herself like that, and that it wasn’t them who had given her that name. I can even believe that and I am not inclined to call it fake news in its purest form, because during a live broadcast situation you do not always have time to check the facts and it is not difficult to make a mistake. Everyone makes mistakes, this is not the point.

What shocked me in this situation was how it was handled further by VGTRK [the state media organization which controls Rossiya 1 TV]. After this episode, Alina Kerova’s parents reached out to me and told me that VGTRK hadn’t even tried to contact them, as well as about the additional problems they had had because of this broadcast.

Alina Kerova’s mother had already managed to return from the identification, and then this program went on the air; her relatives watched it, including her father, who was then travelling, and he called the mother and said: “Are you sure that it was our daughter?” The mother was forced to return to the identification, so the error had rather serious consequences for this particular family. I was surprised that the representatives of the VGTRK did not contact the family, and did not apologise in their programme for this mistake.

I don’t want to use a moralising tone in this situation and lecture other people on ethics; but it was hard for me to talk to Alina’s mother, and I realised how high the price is of such an error.

Another time, it happened purely by chance that we decided to check a person who had appeared in a story on [the Gazprom-owned network] NTV.

We then found this man on the social networks, and he turned out to be an actor who is often hired to participate in various programmes on the national TV channels. Previously, he had mainly been in different kinds of game shows, but now he had appeared in the news.

We called him, introduced ourselves as TV Rain, and said that we also want to shoot a story. We told him that we needed a character who supposedly wanted to buy a house in the Kuril Islands – but that in addition to that, we would like him to say that he had also bought a house in Crimea in 2014 [the time of Russia’s illegal annexation of the Ukrainian peninsula]. He agreed; that wouldn’t be a problem, he said, as long as he would paid for it.

When our story about this went on air, NTV became really offended – until then, they had not been paying attention to our programmes, but at that point they started to have our releases blocked [on YouTube]. Many news media even wrote about how NTV was blocking our Fake News programme. NTV immediately tried to deny their responsibility and said it wasn’t on purpose, that it was their bot which had allegedly blocked it because it found their original content in our videos.

But normally, the national TV channels don’t react to our programme in any way; although we know that they watch it and follow our work.

People realise they are being lied to

Q. So do you think that your exposure can pose a threat to the disinformation – or compete with it?

A. We are first of all producing the programme for our audience. And I see in the feedback we receive that people need this kind of program.

Moreover, it’s known for a fact that the older generation mostly watches TV and rarely uses the internet, and I often see people telling things like, ‘I showed your program to my mom, my friend, or someone else, and it made them realise that they are being lied to by the national TV channels’. In my opinion, this is very important, and as long as I see this kind of feedback, I believe that we have good reasons for doing what we do.

Q. How do you find the fakes? Do your viewers or your colleagues write to you with leads, or are you somehow systematically monitoring the national TV channels?

A. Yes, we do indeed systematically monitor the TV channels. We sit down and watch the programmes – we know quite well where we should direct our attention: for example, to Vladimir Solovyov, who often says absolutely terrible things on his shows, and to Dmitry Kiselyov’s programme.

It does happen, of course, that people send something to us, and it happens that in the middle of the week, some kind of fake pops up, which everyone is talking about; but basically, it’s our own monitoring when we ourselves look for the fakes.