Amid the noise of disinformation, one of the regular techniques that comes through again and again is the repetition of extreme language to criticise, abuse or denigrate. And one of the favourite accusations is that of Nazism.

This week we saw several such examples. The continued claim that Ukraine is governed by Nazis is a regular tool in the pro-Kremlin disinformation campaign to discredit the country. This week we saw accusations levelled at Italian politicians – by an outlet in the Italian language – that they support Nazi Ukrainian troops in Donbas and at an Armenian monument.

In addition, last week we saw the US releasing a list of names that include 210 Russian top officials and billionaires. The list itself does not impose new sanctions on Russia. Publishing the list was required by the Countering America’s Adversaries through Sanctions Act, which was meant to respond to Russia’s interference in the 2016 US election.

Russian TV’s response was to compare the list to the Holocaust. The strongly emotional message was that “any citizen of Russia could end up on this list”, “every one of us is bad only because we live in Russia”, and finally: a comparison to segregation, Nazism and the Holocaust.

Two disinformation narratives linked to Germany were present this week. “Harems for refugees paid by the German tax-money” continued a well catalogued trend of stoking concerns over the country’s migration policy. The catchy headline is based on anonymous quotations from social media. 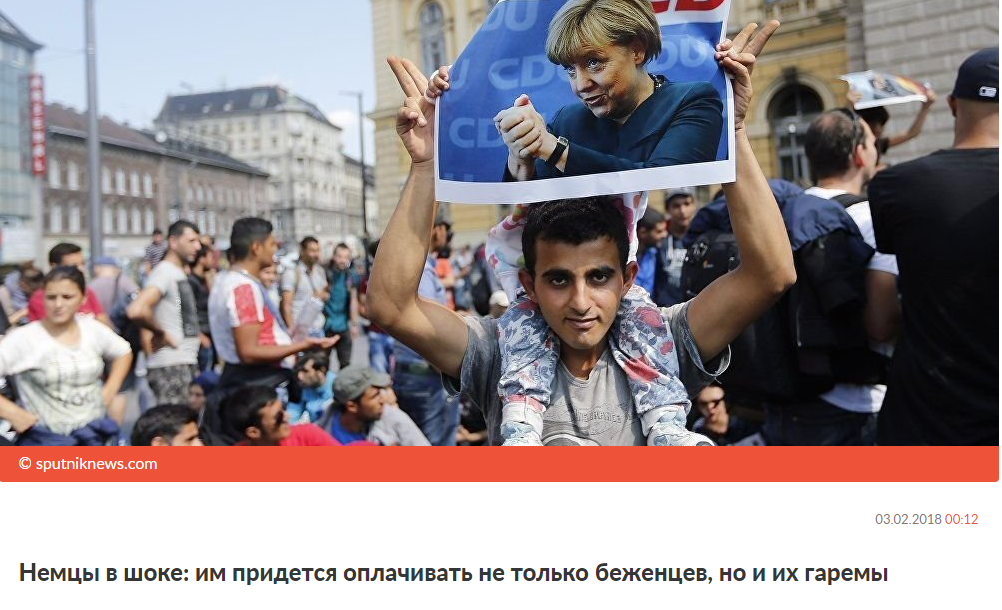 Disinformation about harems paid by the German tax-money is based on anonymous quotes from social media.

And the visit of German regional deputies to Crimea was described by the Russian defense ministry’s TV channel Zvezda as “official”, in line with ongoing efforts to normalise the peninsula’s illegal annexation, not recognised by the EU. Pro-Kremlin media duly amplified the story.

However, the German government swiftly debunked this claim, stating that, “We are fundamentally critical of such visits, but private travel does not fall under sanctions.” Germany also said that it adheres to the non-recognition policy due to the illegal annexation of Crimea by Russia and that Germany warns those who decide to travel about the legal consequences from the Ukrainian side.