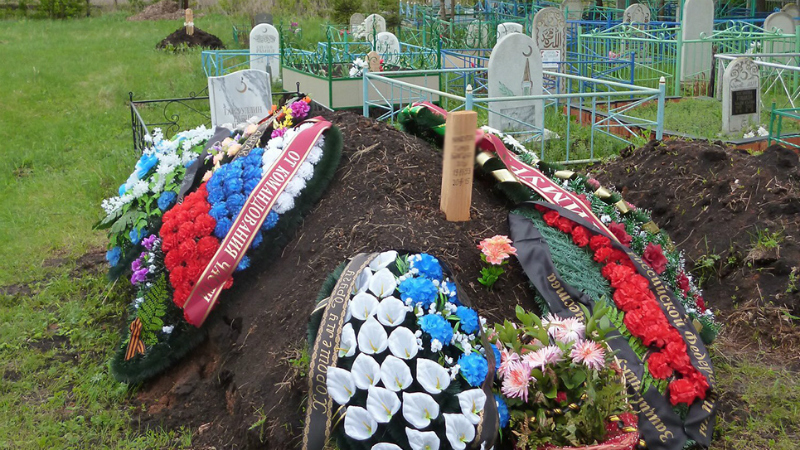 Russian opposition blogger Ruslan Leviev and his small team of investigators have released a new investigation into the deaths of three Russian soldiers who seem to have died during a battle in eastern Ukraine in May 2015 (English translations available here and here). The most striking evidence from the group included photographs of the gravesites of the three Russians who were active members of the 16th separate Spetsnaz (special forces) Brigade, military unit 54607.

The investigation found these gravesites through deep dives into the social media connections of the three soldiers and by directly contacting local sources. Unlike other open source investigation groups and individuals (such as Bellingcat, Ukrainian blogger Askai, and [email protected]) who almost exclusively use online open-source research, Leviev’s team adopted a mix of on-the-ground reporting and long-distance open-source research to get their results. Some of these research methods are rarely, if ever, used in traditional open-source research. They also skirt widely accepted boundaries of ethical reporting, such as having a State Duma representative’s aide reach out to a slain soldier’s mother for information or using social engineering to convince local citizens to find and photograph gravesites.

RuNet Echo interviewed Leviev and his team members to learn about their motivations, methods, and about the necessity for their investigation. We also asked them where they see the boundaries of ethical research and reporting in a situation of conflict.

When RuNet Echo interviewed three open-source investigators (two pro-Ukrainian, one with pro-separatist leanings) in March, it appeared that the motives for doing citizen journalism were fairly consistent: a dissatisfaction with the mainstream portrayal of the ongoing conflict, and a desire to see the truth of the matter behind all of the propaganda from both sides. Leviev and his fellow investigators said their motivation was somewhat different, focusing on a sense of duty to reveal what they see as the truth of the conflict and show other Russians and Ukrainians the unrepresented narratives of the war’s consequences.

Leviev is a fairly well-known opposition blogger who has also worked for Newcaster.tv, which airs livestreams of opposition-related events and rallies. He sees his work as an opportunity to make a better Russia for its own people.

I started doing [this investigative work] because I feel a great responsibility to the people around me. I have had a lot of difficult moments in my life when totally random people have rescued me. So, I feel that I owe it to them.

“Tolik” is an anonymous Russian contributor to Leviev’s investigation who conducts research in his spare time away from his normal full-time job. He hopes that his contributions to investigations of Russia’s involvement in the war in Ukraine will help reduce the violence and discourage others from participating in the conflict.

I believe that revealing proof of Russian involvement [in the war in Ukraine] will open up the eyes of a greater number of the country’s inhabitants to the catastrophe and the troubles that Russia is now creating in relation to Ukraine. And I hope that a future separatist or a future kontraktnik [Russian contract soldier] will not join this unnecessary war.

When asked if his team’s methods were unique, compared to either traditional journalism or open-source citizen investigation, Leviev agreed, citing a different approach to ethical concerns and unorthodox ways of making contact with the sources used in investigation.

Our methods are unique, yes. Because what we do is either strictly forbidden for any normal journalist, or is contradictory to the typical journalism ethics.

One of these methods was used to quickly obtain a photograph of the grave of one of the Russian servicemen who died fighting in Ukraine, Timur Mamayusupov. As described in the report from Leviev and his team, the team messaged a young man on the social network site VKontakte and convinced him to help.

We give our team another task: find a young (16–20 year old) guy on social networks, contact him, win his trust under the “dead comrade’s relatives” legend, ask him for help, tell him it’s urgent and even offer money for help. Why a 16–20 year guy? Because they are the easiest to convince to do such a small job. After a few minutes of searching and talking we get the photos of Timur’s grave, which is 950 km from Tambov (a lot of travel time and money saved).

How far can one go to investigate something? RuNet Echo asked Leviev if he has received criticism from anyone for his methods, along with what he considers to be the ethical boundary for how far he and his team will go in their investigative activity.

I have not faced criticism of our methods from journalists or other investigators. […] Only [pro-Kremlin] Nashi members have begun to criticize our methods (not kidding). […] The boundary [of investigation methods] is drawn at emotions. When you start to allow emotions in your work—that’s it, you crossed the line, your work is down the drain, and this is no longer an investigation.

Most of the ethically questionable approaches that Leviev and his team use in their work involve misrepresenting themselves to others in order to obtain information. Other than the aforementioned instance of messaging a local resident for photographs of a nearby site, Leviev and his team also found phone numbers of friends and family members of the slain soldiers and asked where the graves sites were, so that they could visit them. While this was technically true—they did want to, and eventually did, visit these grave sites—they found it more effective to not present themselves as investigative journalists.

As Leviev’s boundaries of ethical investigation seem to be rather ambiguous, an important question to consider is if he and his team believe that “the ends justify the means.”

This phrase “the ends justify the means” is very philosophical and fuzzy. I’d prefer to talk about a specific situation. Our methods of investigating the war justify the goal of ending it.

Independent online media in Russia has suffered numerous blows over the past two years, including the takeover of Lenta.ru, the blocking of Grani.ru, and the overall rise of self-censorship, leaving a vacuum for investigative journalism.

The efforts of Leviev and his team have already gained attention in Russian independent media, including interviews on Echo of Moscow and TV Rain. Leviev believes that he and his team help fill this vacuum with their non-traditional reporting methods, or so-called “blogger Internet research.”

“Blogger Internet research” plays an extremely important role in contemporary Russia, since almost all independent media in Russia have been snuffed out. When such incidents occur (the strange death of our soldiers), you realize that no journalist is going to investigate it, because there is a ban on such media activities due to the threat of closure. Therefore, we fill this gap.

Outstanding investigative journalism does still happen in Russia — look no further than Novaya Gazeta, whose investigative reporters have published several groundbreaking reports and interviews detailing Russian involvement in Ukraine over the past year. Compared to Western media outlets, though, this is a mere drop in the ocean. Given the especially web-savvy urban middle class and youth in Russia and Ukraine, a new type of investigative journalism that blurs the lines between armchair Internet sleuthing and hard-hitting investigative reporting seems to have a more promising future—at least in terms of finding interested audiences, if not viable business models for long-term survival. The ethics of such investigations, however, remain an issue—especially when they go against the grain of traditional journalism standards.