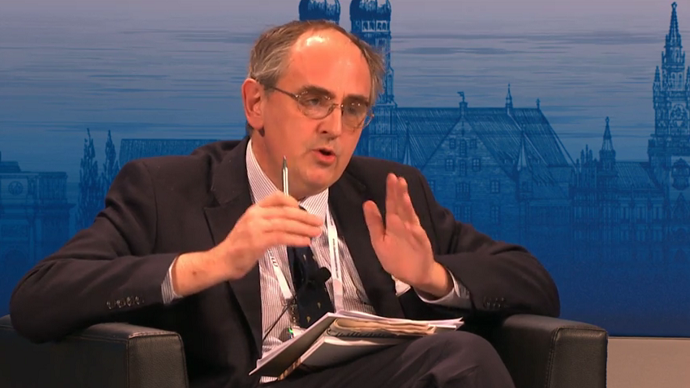 Below is the full transcript of the speech by Edward Lucas on RT at a panel discussion called ‘Who is Ready For Hybrid Warfare?’ Other participants included NATO Supreme Allied Commander Europe Philip Breedlove and Norwegian Minister of Defense Ine Eriksen Soreide.

“The use of information warfare was another big mistake we made in 1991. We thought: what can possibly go wrong? We have a free press, we have a free media market – truth will triumph. Well, it doesn’t. It doesn’t triumph when you’re faced with RT, the former Russia Today, or with Sputnik – the so-called media organizations, which are directly plugged into the Kremlin lie machine.

We see very clearly what happened in the case of Crimea where Russia won the war in Crimea without really having to fire a shot. They had so corroded and confused the decision-making capabilities of Ukraine that even though the Ukrainians had thousands of troops, lots of ammunition, lots of weapons, they had bases in Crimea, but those soldiers were left leaderless and confused and didn’t know what to do. And Crimea fell almost without a shot.

The use of force is only part of this hybrid warfare. Sometimes it’s just assassination as we saw in London a few years ago with the murder of Aleksandr Litvinenko. It can be the use of organized crime. It’s the use of cyber-attacks to disable and confuse. It’s also the little green men whom we saw in Crimea – deniable. When you complain about them, you’re told that this is just patriotic volunteers on holiday.

We see the use of nuclear bluff increasing in Russia energetically modernizing its tactical nuclear weapons just at the time when the West has been withdrawing its tactical arsenal in the pursuit of global Nuclear Zero.

And what unites all these things is they wouldn’t matter if we were strong. They are all based on the exploitation of our weaknesses, of ethnic and religious divisions or – as we saw in Ukraine – of regional and social divisions, of political divisions. Why do people watch RT so avidly? Because they think that the mainstream media isn’t telling them the truth and they are fed up with the political elite in our countries and the economic growth or lack of it, which they are delivering. And the fundamental point is this is a joined-up threat.

We need to get back the ability to rebut and to criticize. If RT puts on people – and it does put on people who are Holocaust deniers, who think that 9/11 was an inside job, who believe that [the] Pope is a lizard – I’m not joking, this is true – we should be able to humiliate those channels and those people and the people who put them on, and the producers who put them on and push them out into the media fringes so they are no longer treated as real journalists and real programs but as cranks and propagandists.

I think we could do a bit more of ostracism. I’m quite happy to say that if anyone puts a CV on my desk, and on that CV I see they worked at RT or Sputnik or one of these things, that CV is going into the bin and not into the intro. We would not have accepted it during the Cold War that people could move from working for Pravda, or Izvestia, or TASS, and then into jobs in Western media. Far too many people see a job at RT as the first stage on a career ladder. It’s not. It’s the last stage on a career ladder. It’s like working as a PR person for a tobacco company, but even worse. And only then would I start looking at regulatory things — and there are things we can do on a regulatory side. We have a regulated media space. In my own country, Ofcom is complaining to RT about its lack of balance. So, there are things we can do but I think those things are the last resort, not the first resort.”

Full video from Panel Discussion “Who is Ready for Hybrid Warfare?” you can see here.