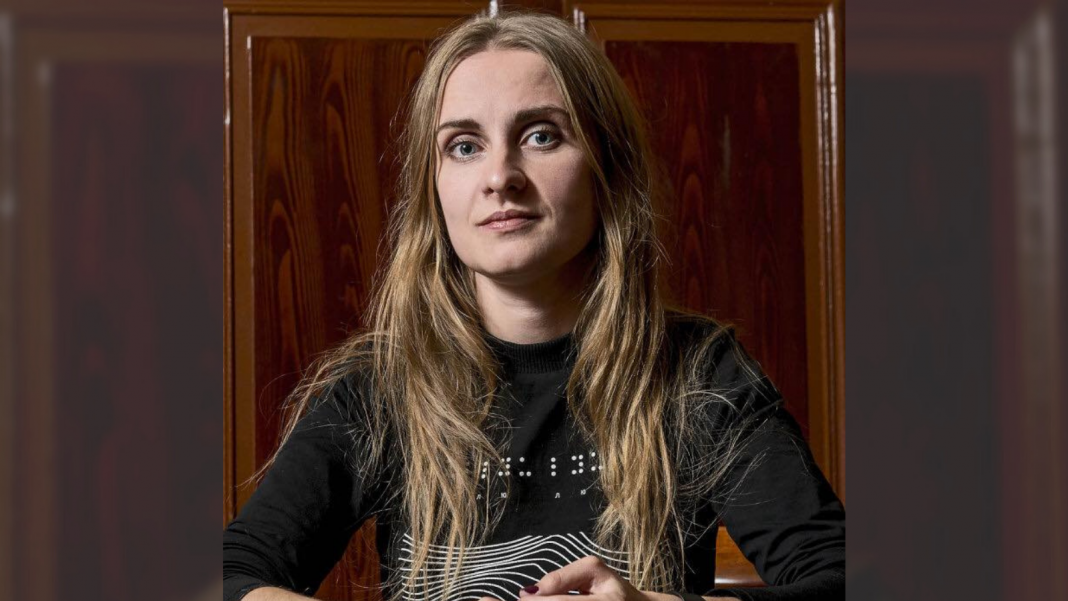 Eight years ago on 18 March, Russia illegally annexed Crimea from Ukraine. The scars of the annexation are still raw in Ukraine, and for many Ukrainians, the Russian leadership’s ruthless war against their country brings back painful memories of the 2014 takeover of Crimea.

In many ways, Oleksandra Dvoretska’s life reflects the tragedies that have befallen Ukraine over the past decade.

Oleksandra, 31, fled her native Crimea eight years ago when Russia invaded and illegally annexed the Black Sea peninsula from Ukraine. A former pro-democracy activist who helped organise public protests against the Russian occupation of Crimea, she has not returned home for the past eight years out of fear for her safety.

“I miss everything about Crimea,” she says, wiping tears from her eyes. “I always thought that I would spend my whole life in Crimea, I had never considered living anywhere else.”

Oleksandra’s husband hails from Luhansk, one of the cities in eastern Ukraine that has been occupied since 2014 by pro-Russian separatists backed by Moscow.

The couple was able to rebuild their life in Kyiv, away from their respective home regions.

But on 24 February, Russian President Vladimir Putin launched a full-scale war against Ukraine, killing thousands of people, wreaking devastation across the country, and forcing more than three million Ukrainians from their homes – half of them children.

For a second time, Oleksandra had to flee.

“I never thought that this situation would repeat itself, that I would need to pack my bags again and leave my home behind,” she says.

She has now found refuge in Germany, together with her mother and six-year-old son. Her husband stayed back in Kyiv to fight Russian forces.

Oleksandra’s political activism goes back to the pro-European Maidan protests in winter 2013-2014. She first co-organised the Crimean chapter of Maidan before joining the main protest movement in Kyiv in January 2014.

When Russian forces moved into Crimea in February, she returned to Simferopol to help organise street protests against the occupation.

Several weeks later, however, two of her fellow activists were detained. She alerted journalists but things quickly turned sour.

Armed people came up to Oleksandra and the journalists, ordering them to erase the footage and making threats. And at the police station where her activist friends had been held, she was told they had been handed over to Russian forces.

Oleksandra knew her time in Crimea was up. She headed straight to the train station and got on the first train to Kyiv.

“I left hastily in a borrowed jacket, without even being able to say goodbye to my family,” she recalls. “This was my last day in Crimea.”

Crimean Tatars in the crosshairs

Zarema, a journalist, still lives in Crimea but the past eight years have also been harrowing for her and her community.

Zarema is a Crimean Tatar, the indigenous minority of Crimea.

In 2014, when Russian forces seized control of Crimea, Crimean Tatars were among the most vocal opponents of Russia’s invasion of their homeland.

They have since paid a heavy price for their defiance.

“We live in fear,” says Zarema, who asked that her name be changed for safety reasons. “With the annexation, all our fears, all the ordeals that our people suffered since 1944 – it all suddenly resurfaced.”

In May 1944, the entire Crimean Tatar population was deported at the orders of Soviet leader Joseph Stalin for allegedly sympathising with Nazi Germany.

Families were packed into cattle trains and sent to Central Asia. Nearly 8,000 Crimean Tatars died during the journey, while tens of thousands died of starvation, exhaustion, and diseases in the first three years of resettlement.

According to various estimates, between 20 and 46 percent of Crimean Tatars died as a result of the deportation.

Although they were fully rehabilitated in 1967, the deportation remains a deep trauma for Crimean Tatars, many of whom still associate Russian rule with oppression and suffering.

Today, Crimean Tatars fear they will once again end up in Moscow’s crosshairs.

“We are afraid that Russian authorities will decide again that we are a disloyal people and something terrible will happen to us,” she says. “If ethnic cleaning starts again, there will be no one to protect us.”

Persecution of Crimean Tatars began soon after the Russian invasion of Crimea. Activists and protesters were routinely detained, intimidated, and in some cases even kidnapped in broad daylight.

On 15 March 2014, the mutilated body of Reshat Ametov, a Crimean Tatar who was abducted while peacefully demonstrating against the Russian occupation, was found outside Simferopol.

He was buried on 18 March, the day Putin triumphantly announced the annexation of Crimea, promising to protect all ethnic groups on the peninsula.

“This is when we became really scared,” she recalls. “We felt scared and completely unprotected.”

Over the next year, more than a dozen Crimean Tatars went missing. At least six of them, including Ametov, have since turned up dead. Others remain unaccounted for.

At the same time, Crimea’s new Moscow-backed government was quick to crack down on Crimean Tatars’ distinctive culture and sense of identity.

Crimean Tatar media outlets were shut down or turned into Russian-language Kremlin mouthpieces. The Crimean Tatar language all but disappeared from the public sphere.

The Mejlis, the representative body of the Crimean Tatars, was declared “extremist” and disbanded, and its leaders were forced into exile.

In one of the most painful blows to their community, Crimean Tatars were banned from marking the anniversary of their people’s Stalin-era deportation.

“For 30 years we had gathered on squares in our cities to pay tribute to the victims,” says Zarema. “Today we are no longer allowed to hold these commemorations. We can’t even grieve and honour our dead.”

“We are Locked Up”

For Zarema, Putin’s current war against Ukraine is a devastating reminder of the invasion of Crimea eight years ago, which she believes paved the way for today’s tragedy.

She is angry at the international community for what she sees as its muted response to the annexation of her homeland back in 2014 and horrified by the hatred spilling from Russian state-controlled television.

For eight years, the annexation of Crimea has been one of the topics most targeted by Russia’s disinformation machine.

At night, she and her children are now regularly woken up by the sound of missiles and the roar of Russian jets flying overhead to shell mainland Ukraine.

Due to the risk of reprisals, Zarema can only express her anger and pain in private circles.

A new Russian law imposing prison terms of up to 15 years for spreading information that contradicts the authorities’ narrative about the war in Ukraine has made dissent even more dangerous in Crimea.

“I want to scream but I need to keep silent,” she says, choking back tears. “We are locked up. All we can do is write to our Ukrainian friends to ask if they are safe, write to them and pray that we receive a reply.”