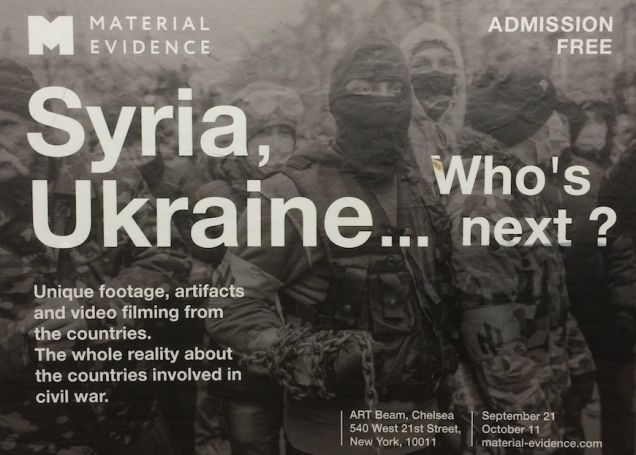 For about a month last year, posters advertising a touring art exhibition called Material Evidence. Syria. Ukraine were nearly impossible to avoid in New York City. The show itself stunk unmistakably of Russian propaganda, and recently unearthed emails suggest that it was financed in part by the Kremlin’s online propaganda agency.

Material Evidence, which ran through September and October 2014 in an enormous Chelsea warehouse space, presented large-scale photos taken during the recent civil conflicts in each of its titular countries. Its promotional materials promised to take an objective look at the Syrian and Ukrainian situations, without “taking sides” or “supporting a specific political goal.” The moral high-handedness felt like overcompensation for the exhibit itself, which was baldly pro-government, painting Syrian rebels as barbarians locked in senseless conflict with a benevolent state and Euromaidan protesters as reactionaries and neo-Nazis.

Because of Russia’s alliances with the Syrian regime and pre-revolutionary Ukrainian government, I and others speculated that the Kremlin or its supporters had financed Material Evidence. The exhibition’s organizers did not effectively dispel that notion. When I asked assistant curator Lana Andreeva last year how an ostensibly crowdfunded operation was able to afford a ubiquitous advertising campaign and a 12,000-square-foot space in the heart of Manhattan’s gallery district, she told me the implausible tale that an anonymous benefactor had dropped a large bag of cash with no explanation at Material Evidence’s last iteration, in Berlin. Benjamin Hiller, the lead curator of the New York installment, has since left the project, citing “misinformations” and a “nonjournalistic approach.”

Writers at the website Euromaidan Press recently sifted through a batch of leaked emails from the Kremlin’s Internet Research Agency — a shadowy government office that employs internet trolls who attempt to sow pro-Russian and anti-U.S. sentiment on social media media and in online comment sections — and found several documents that appear to link the agency to Material Evidence. Among the emails were invoices documenting payments from Internet Research to Zhurnalistskaya Pravda, a far-right Russian newspaper that identified itself as the organizer of Material Evidence when the exhibit debuted in Moscow in January 2014. According to Euromaidan Press, “In general, IRA appears to finance the entire work of Zhurnalistskaya Pravda, all the way to the out-of-pocket expenses of its prominent editors.”

The Kremlin’s network of professional propaganda-spewing internet trolls is large. According to one … undefined internet.​gawker.​com

Euromaidan Press also found documentation of a payment between two apparent shell companies, one of whose names translates to “Evidence” in English, for “services in the organization of an event from 20 December, 2013 until 20 January, 2014,” dates that roughly correspond to Material Evidence’s debut Moscow run.

In June, former Gawker writer Adrian Chen investigated the Internet Research Agency for the New York Times Magazine and found another apparent connection to Material Evidence: several puppet Facebook accounts created by the agency had signed up to attend the show.

Whatever the weird provenance of the exhibition, it does not appear to be slowing down. The latest installment of the exhibition, which focused on Ukraine specifically, closed in Moscow in April. A post on the Material Evidence Facebook page claims it will open in the rest of Europe and in the U.S. “in the near future.”