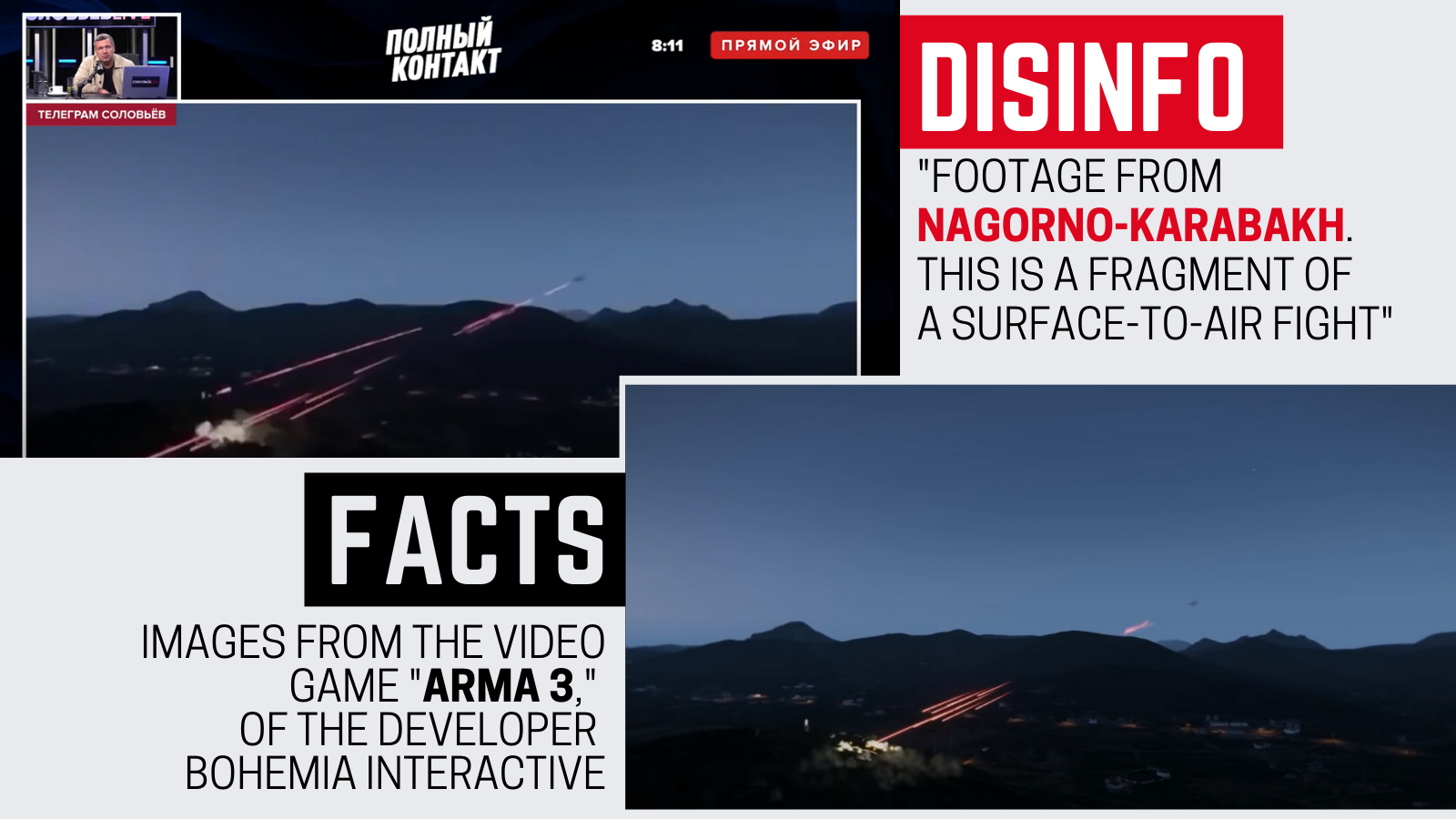 Mistakes as a Means of Disinformation

Lies are more fun than the boring truth and images from the battlefields of video games are more interesting than actual footage from fighting. Once again, a pro-Kremlin outlet is caught presenting pictures from video games as documents from a war zone.

To those who watch us, I now give you an opportunity to see footage from Nagorno Karabakh. This is a fragment of a surface-to-air fight, when they are trying to shut down airplanes. When you watch this, you’d think this is Star Wars, so beautiful, not realizing that behind every such launch there are people’s lives.

He is right about one thing: war is about death and destruction, but the pictures he shared were neither from Nagorno Karabakh, nor very recent. Russian viewers commented the show on social media and demonstrated that the imagery was from a 2013 video game, Arma3, by developer Bohemia Interactive(opens in a new tab).

Mr. Solovyov has admitted the mistake, but, according to a quote from a Russian outlet(opens in a new tab), has no intention to offer his viewers an apology.

To whom should I offer an apology? I deal with my viewers myself, and I haven’t seen anyone asking me for anything. Anyone who worked on a live broadcast knows that anything can happen.

Mistakes certainly happen, only we have seen this before: imagery from the very same game: Arma3, was used in February 2018(opens in a new tab) by Russian national broadcaster Pervy Kanal to illustrate the war in Syria. According to the broadcaster, it was a mistake by the video editor.

Well of course, mistakes can happen several times. Already in 2014, Pervy Kanal “by mistake(opens in a new tab)” produced a montage based on an image from Google Earth as “proof” of a Ukrainian fighter jet shooting down the Malaysian passenger plane MH17. Someone, by mistake, searched for the correct territory on Google Earth, by mistake found a picture of a Boeing of the right type and of a fighter jet and entirely by mistake photoshopped it all into a suggestive picture. By mistake all of this was aired to a national audience on prime time television. Who has doubt? Mistakes do happen!

As in 2017, when the Russian Ministry of Defence attempted to use imagery from a video game as “irrefutable proof(opens in a new tab)” of US support to ISIS. This time from another developer, Byte Conveyor Studio. Another unfortunate mistake. The Ministry did not admit to the mistake, but swiftly and discreetly removed the imagery from its website.

Mistakes as a Method

Studying the phenomenon of disinformation closer, it is easy to draw the conclusion that ”mistake” is a core element of pro-Kremlin information efforts: publish an outrageous, unfounded claim and retract it when someone calls the bluff. An example of this method is the story of the “crucified boy(opens in a new tab)”, when Pervy Kanal aired a claim that the Ukrainian army had crucified the son of a refugee. The story was almost immediately identified as a forgery, and retracted. Still, the story made an impression on the audience, creating the impression of a brutal enemy.

The Russian outlet Republic(opens in a new tab) recently published an article, asking why Kremlin propaganda is so primitive:

If one follows a pro-Kremlin channel on Telegram, one gets the opportunity to follow first-hand how contradictory versions ofreality is permanently broadcast live, even without a hint of any attempt to tie things together.

The outlet explores the issue and draws a conclusion: this form of disinformation is cheap and accessible, and it underscores to a domestic audience the impression that Russia is at war:

Under conditions of war, any idiot, half-wit or anyone lacking any sort of talent can produce a useless, stupid and in the long-run harmful product, without fear of being held responsible for his or her words. Even worse – they have all reason to expect commendations and career opportunities. All efforts for the front; all efforts for the victory. Even when there is no front and no victory can be expected.

We all make mistakes. There is a famous Latin quote: Errare humanum est. The complete saying, often attributed to Roman philosopher Seneca(opens in a new tab), is: Errare humanum est, perseverare autem diabolicum. To err is human, but to persist in error is diabolical.