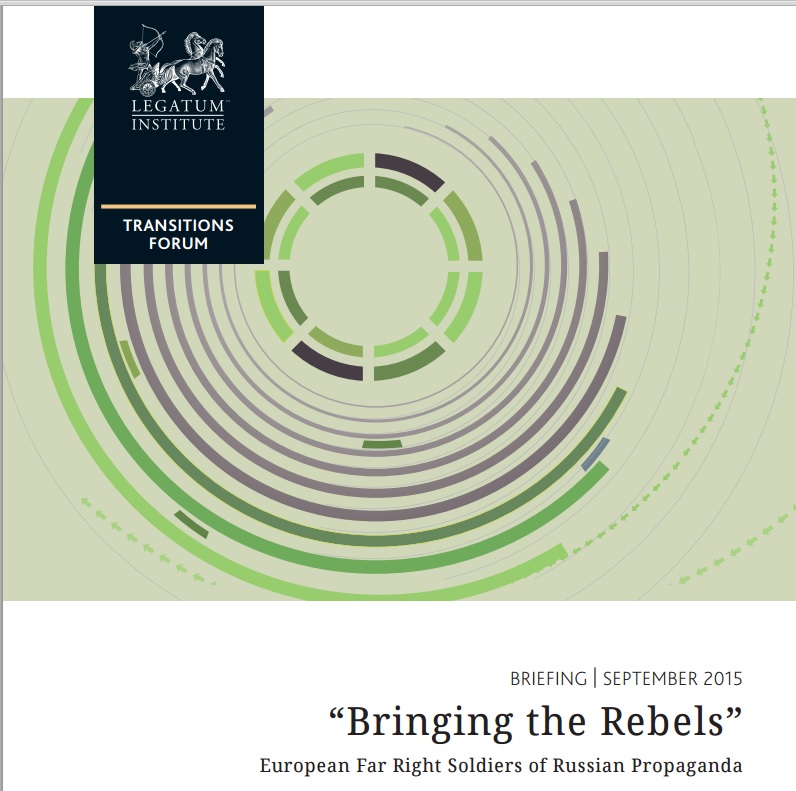 A briefing by Anton Shekhovtsov for the Legatum Institute. You can read the full text here.

More than twenty years ago, a convicted German neo-Nazi named Ernst Zundel launched a weekly television programme in Canada. He described it like this:

This TV programme differs from the mainstream media, because we […] bring you uncensored news, uncensored commentary. Also, commentary from few points that are seldom heard today in this world of political correctness. […] We hope to be politically incorrect, uncorrect, […] because we want to bring you the rebels.

Zundel’s programme, “Another Voice of Freedom”, ran for more than 30 episodes before it was closed by the Canadian authorities. Even tolerant Canada couldn’t stomach a programme promoting Holocaust denial. And so Zundel took his business elsewhere. In 1996, he moved to Kaliningrad and began broadcasting weekly on the Voice of Russia (VoR.) From there, his “long monologues and quotations from the works of various Holocaust deniers” reached Germany, where Holocaust denial is a criminal offence. The public reacted, a scandal followed— and the VoR shut down the programme. The management pleaded that it had been unaware of the content of Zundel’s broadcasts.

Nineteen years later, much has changed. President Boris Yeltsin has been replaced by President Vladimir Putin. A once relatively free Russian press is now almost entirely under de facto state control. Russian international broadcasting policy has changed too. Instead of promoting their country abroad, VoR, and RT, the Kremlin’s international broadcaster, have adopted a new philosophy. In the words of one observer, they have “morphed into a platform for conspiracy theorists and other like-minded figures on the margins of debate—especially for those who espouse anti-American views”.

Since 2008, the Russian media have in fact been doing exactly what it shamefacedly stopped Zundel from doing in 1996: “bringing the rebels”—publicists and commentators coming from the far right and far left, including conspiracy theorists and committed racists—to the Western public. At the same time, they have deepened their relationship with European far right and far left activists, presenting them as legitimate commentators and even opinion-makers. This article examines the origins and development of that policy.

Even before the invasion of Crimea led to increased tension between Russia and the West, RT was pursuing a very distinct anti-Western, anti-American and antidemocratic narrative. In 2010, Sonia Scherr of the Southern Poverty Law Center, an American NGO, was already describing RT as reporting “with boosterish zeal on conspiracy theories popular in the resurgent ‘Patriot’ movement, whose adherents typically advocate extreme antigovernment doctrines”. RT had been regularly giving exposure to fringe figures who promoted conspiracy theories about the September 11 attacks being “an inside job” as well as Barack Obama being born abroad and the US being a “tool of the New World Order”.

The September 11 conspiracy theories promulgated by RT were not limited to those voiced by US commentators. Also in 2010, Aymeric Chauprade, a top member of the Front National (National Front, FN) and contemporary advisor on international relations to the FN’s leader Marine Le Pen, appeared on RT’s show “9/11: Challenging the official version”. The TV channel introduced Chauprade as “a dissident voice in the French academic world” and “a critic of Western policies towards Russia”, and asked him to discuss his dismissal from a chair at the Collège interarmées de Défense following an accusation of supporting conspiracy theories around the September 11 attacks in his book Chronique du choc des civilisations (Chronicle of the clash of civilisations).

There were earlier precedents too. In their attempts to justify Russian aggression towards Georgia, the Russian media turned to Heinz-Christian Strache, the leader of the Freiheitliche Partei Österreichs (Freedom Party of Austria, FPÖ). In October 2008, after the Russian-Georgian War, Strache took part in a conference, “EuropeRussia-Georgia: Peace Building”, held in Vienna under the patronage of FPÖ member Barbara Kappel. At this conference, he made statements critical of contemporary Georgian president Mikheil Saakashvili. The VoR and other Russian media picked up these statements almost immediately and were eager to quote Strache who “urged the EU countries not to take their lead from the United States in assessing the Georgian-South Ossetian conflict and take a balanced stand on Russia”.

The Russian media also focused on trouble within the EU, whether with the Eurozone or with immigration, to prove that democracy and integration were failing. When discussing a meeting of Eurozone finance ministers in 2011, RT quoted three MEPs, none of whom could have possibly provided any optimistic or even neutral view on the future of the Eurozone: Nigel Farage and Godfrey Bloom of the Eurosceptic UK Independence Party (UKIP), and Morten Messerschmidt of the far right Dansk Folkeparti (Danish People’s Party).

The coverage in the Russian international and domestic media of the riots in the Stockholm suburbs in May 2013, which broke out after police shot to death an elderly machete-armed man of non-Swedish origin, was also typical. Of seven people cited in RT’s TV report “They don’t want to integrate”, four belonged to far right and racist circles: Kent Ekeroth, MP of the far right Sverigedemokraterna (Sweden Democrats); Ingrid Carlqvist and Lars Hedegaard, editors of the racist newspaper Dispatch International; and Gerolf Annemans, contemporary chairman of the far right Vlaams Belang (Flemish Interest). Such out-of-balance reports aimed at presenting the views of far right and generally fringe commentators as of equal value with the sober analyses of the problematic issues.

RAMPING UP THE PROPAGANDA CAMPAIGN

The trend, which began in 2008, grew even stronger in 2013-2014 when Russian domestic and international media first campaigned against the Association Agreement between the EU and Ukraine, and later in favour of the invasion of Crimea. In one of its shows, the VoR, discussing the prospective signing of the agreement, noted “some experts inside the EU” who said that Ukraine would “lose its economic sovereignty as a whole number of its economic branches [would] be governed directly from Brussels”. However, only one such “expert” was named in the programme: “prominent Polish geopolitical analyst Mateusz Piskorski”.

Piskorski is a former member of the neo-Nazi Niklot movement and populist Samoobrona (Self-Defence) party, as well as the leader of the straightforwardly pro-Russian Zmiana (Change) party and founder of the European Centre of Geopolitical Analysis, a fake think tank that since 2005 has sought to legitimise unfair, fraudulent or illegitimate elections and referenda in the “post-Soviet space”.

Piskorski became an important communicator of pro-Moscow narratives in the Russian international media—a status hardly commensurable to the limited significance either of Zmiana or the European Centre of Geopolitical Analysis in his home country, Poland. With a few exceptions, up until the second half of 2013, the Russian media mentioned Piskorski only in relation to his “election observation” activities. Later, however, they started asking him to comment on other issues, and he readily talked about how “a particular element of the ‘Ukrainian’ protest had been developed and prepared in a local US embassy”; how the Ukrainian opposition parties were “calling for major violations of human rights” during the revolution; and how the Americans would “continue to use the situation in Ukraine as a means of destabilising European Union countries and Russian Federation”.

Piskorski is usually described in the Russian media as “a prominent geopolitical analyst” or “geopolitical expert”, but he is also pictured as a representative of a particular “nonconformist” trend in the EU. In a similar vein, presenting the narrative favourable to Russia’s foreign policy as part of this trend, the VoR aired an interview with the FN’s Marine Le Pen and introduced her by saying “not everyone in Europe believes that Ukraine made a mistake by refusing to sign an association agreement”.

Le Pen has become a regular commentator for the Russian media since the end of 2013. It is worth noting that, before this, the media in Russia mostly mentioned Le Pen as a newsmaker. However, since the beginning of the pro-European protests in Ukraine, she has appeared in the Russian mainstream media sphere as a commentator and opinion-maker, offering her views on various international issues, mostly focused on Russia and its foreign policy. These messages were communicated by all the Russian state-controlled international media, such as RT, VoR, RIA Novosti, and, later, Sputnik. They readily conveyed her arguments that “the EU has lost control of its foreign policy to Washington”,16 “the Ukrainian crisis [was] all the fault of the European Union”, and the EU was “stupidly waging Cold War on Russia”.

You can read the full text here.