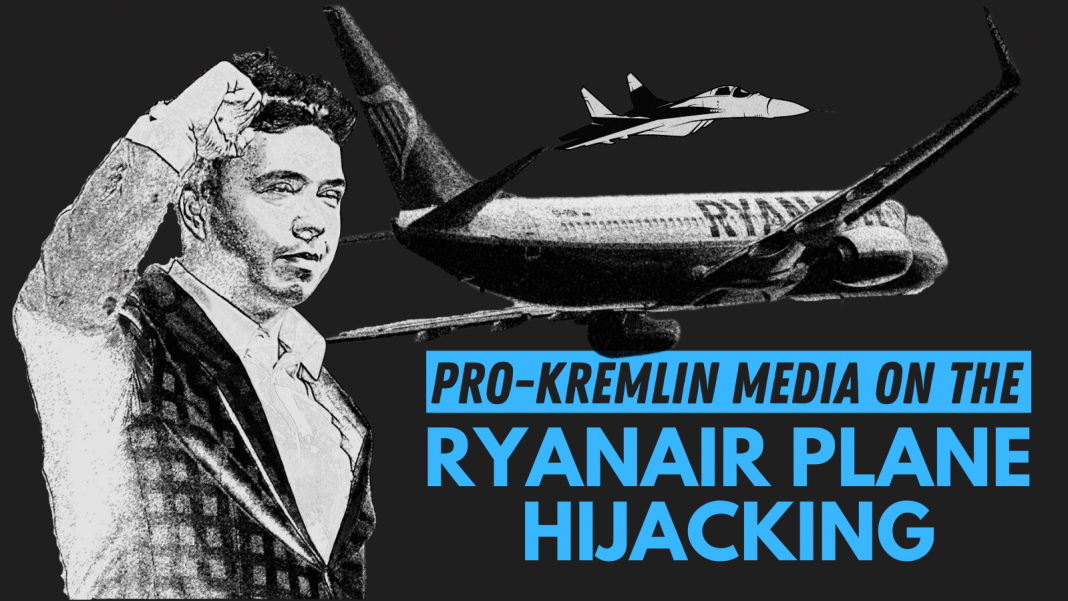 Pro-Kremlin media have mobilised a common – and flawed – instrument. In literature on Ethics, it’s referred to as the “Golden Rationalisation” – the notion that an unethical or criminal act is supposed to be less unethical or criminal if “everybody does it”. If others lie, steal, or cheat – why shouldn’t I be allowed to do it?

On 23 May, a Belarusian fighter jet intercepted Ryanair flight FR4987 en route from Athens to Vilnius. The Minsk Air Control reported a bomb on board the aircraft and demanded the flight redirected to Minsk. As the plane landed, a dissident journalist wanted by the Belarusian authorities for “extremism” was detained. No bombs were found. In the afternoon 24 May, Belarusian authorities claimed that the Palestinian terrorist organisation Hamas had organised the bomb threat, allegedly to force the EU to demand an Israeli cease-fire in Gaza. This came several days after a cease-fire had already been negotiated.

This incident drew virtually unanimous international condemnation. Michael O’Leary, CEO of Ireland-based Ryanair, describes the incident as “state-sponsored hijacking”. Irish foreign minister Simon Coveney calls it “aviation-piracy that is state-sponsored”. Most of the passengers on board the aircraft were Lithuanians, and Lithuanian authorities are currently investigating the incident as an “act of terrorism”.

The most famous episode was in 2013, when Austria, after demands from the US, forced the airplane of the President of Bolivia to land, without giving any excuses. Less known is the incident in 2016, when an aircraft of the Belarusian airlines was forced to land in Kyiv, as Ukrainian Security Service was interested in an Armenian citizen on board the flight. He was “taken off the flight”, and the plane could depart. No apologies followed.

Here one must correct Mr Lavrov: The president of Ukraine actually apologised for the incident and offered financial compensation to the airline.

According to The Washington Post, none of the examples cited by Ms Zakharova and others involved bomb scares or crackdowns on the political opposition.

State News Agency RIA Novosti suggests that hijacking civilian aircraft is usual practice for security services everywhere/globally. Everybody does it! The agency forgets to mention that in the Ryanair case, the passenger plane was intercepted by a MiG-29 fighter jet belonging to the Belarusian Airforce, armed with air-to-air missiles.

What else does everybody do?

Sadly, this is not the first instance when the “Everybody does it!” defence is invoked. The EUvsDisinfo database on disinformation contains a number of examples illustrating this line of conduct. According to the distorted logic of pro-Kremlin, it was OK to illegally annex Crimea, because the West recognised Kosovo. Russian violence against street protests is OK because there have been isolated instances of violence in street protests in Europe. Russian doping is OK because all countries use doping…

Justifying theft, violence, or drugs with the argument that “everybody does it” is no defence. The annexation of Crimea is a widely recognized violation of international law; the Russian police’ hard-handed crackdown on demonstrations in January 2021 was a violation of Russian law, and doping is simply cheating, which is punishable by international sports authorities. Whether or not others have violated the same laws is irrelevant.