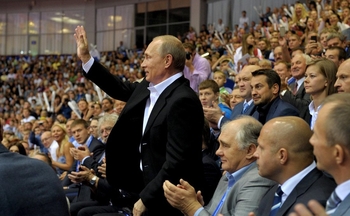 With Putin’s approval ratings sky-high, have even his critics changed their minds – or have they just found the door?

Analysts in the West are making a nice living these days explaining the workings and effects of Russian propaganda, but there has seemed a consistent gap in those explanations.

Yes, many Russians get their news primarily from state-controlled television, which is home to enough hokum, hucksters, and hagiographers of the ruling regime to degrade the critical faculties.

But surely the 89 percent of respondents who recently told pollsters they approve of Vladimir Putin’s performance includes some of his former critics – the skeptical city-dwellers who have access to other sources of information and likely don’t depend on the state for their livelihood. Further, the nearly 50 percent drop in the number of people with a favorable view of the European Union suggests that a particular version of the Ukrainian conflict has gotten traction.

Are we to conclude, then, that legions of Putin critics are accepting a particular lie – one that I would have expected to be a much harder sell – that European countries, including Germany, are embracing a fascist regime in Ukraine while an isolated Russia fights for decency and humanity? And this in a country where people are famously cynical about their homegrown media?

I’m not the only one scratching her head over this. In a recent interview with Snob magazine, Radio Free Europe journalist Ksenia Kirillova said she has been struggling with the question of why the intelligentsia is supporting Putin. She offered three reasons: fear, a longing to resurrect the Soviet Union, and a reflexive identification with the state in matters of foreign policy.

Kirillova, who formerly worked in the Urals bureau of the opposition Novaya Gazeta newspaper and now lives in the United States, said the specter of instability haunts Russia. A dread of returning to the lawless 1990s, encouraged by the Kremlin, feeds a “phobia that we will have a new Syria, Libya, color revolution, which will mean anarchy, a sharp decline in living standards, the emergence of uncontrolled bandits on the streets, almost a civil war.”

“The fact is that even smart people, and maybe intelligent people subconsciously feel this difficult situation even more, [think] Russia is heading for disaster. But they apparently do not have enough of some moral qualities, especially courage, to see this difficult situation for what it is. Even if they do not believe in the ‘Nazis in Ukraine,’ most of them sincerely believe in the hostility of the West,” Kirillova said.

Many of the same people would welcome a return to the Soviet Union, not because they harbor imperial ambitions, she said, but because it is an idealized past in a country with a grim future. They also want to live in a country that no one would dare attack.

In that light, the annexation of Crimea was a step in the right direction.

And finally, with a dearth of functional public institutions to identify with, the state has little competition for people’s loyalties.

That is a necessarily superficial gloss of a long interview that is well worth reading, but I wonder if Putin’s high poll ratings are in turn linked to another set of figures.

According to the Russian Statistical Service, the number of emigrants rose by about 60 percent from 2011 to 2014, from 600,700 to about 970,000. Those statistics come with a few caveats – on the one hand, the country’s immigration authorities changed how they counted emigrants after 2011 in a way that inflated the numbers, while on the other hand, some emigration won’t show up in the statistics for other reasons, as journalist Ksenia Semenova pointed out in a measured analysis of emigration for the Institute of Modern Russia.

But whether or not those figures are squishy, they may be beside the point: Semenova is one of a growing list of writers to point out the growing list of achievers and dreamers who are getting out of Russia.

“When we talk about the qualitative character of today’s emigration, the number of people leaving the country fades into insignificance,” she writes. “Today, it is highly educated and entrepreneurially inclined people who are leaving Russia: i.e., those who stand to give Russia’s economy a boost, wean it off the ‘oil needle,’ reduce its dependence on imports, and essentially raise the country to a higher level.”

People like Vladimir Yakovlev, who founded Kommersant media and coincidentally, Snob magazine, and who recently told Radio Free Europe why he has left Moscow for Israel, with no intention of returning.

“People are now leaving because they are scared to stay where they would like to live. They are running from Russia,” Yakovlev said, in an article about the rising number of Russian Jews heading to Israel.

As RFE reports, emigration to Israel, mostly from St. Petersburg or Moscow, doubled in 2014 compared with any of the previous 16 years, and so far is on track to exceed that this year.

Again, not that there is a stampede to the airport: while growing, the number of Russians settling in Israel is still only in the four digits annually – about 4,700 in 2014, according to Israeli government statistics cited by RFE. And fewer Russians tell pollsters these days that they are planning to move abroad.

But those who study Russian emigration say the ones who leave are a select group: educated, relatively well-off, entrepreneurial.

Apart from Jews heading to Israel, there have been many others in the past year, including researchers, economists, journalists, and tech entrepreneurs. And that is not to mention the foreigners contributing to Russian society, including the American professor trying to help businesses in Nizhny Novgorod to innovate and the Dutch entrepreneur who founded the RBC business news agency, who are being driven out.

In a discussion for Radio Free Europe, foreign policy analyst Sergei Medvedev said last month that his students at the prestigious Higher School of Economics have “life priorities” connected with leaving for the West. And Alexei Levinson, a pollster for the independent Levada Center, told Medvedev the young and the rich are more likely to “constantly or often” think about leaving Russia permanently, and the most highly educated, the richest, or those who live in major cities are more likely to want to move out of the former Soviet Union entirely.

In Russia’s new jingoistic, post-Crimea heyday, life for the dissenter who stays is becoming ever lonelier, journalist Maria Eysmont said in the same discussion.

“I’ve heard others compare it to a ghetto, although I would not say that,” she said. “If you’re in some small ghetto, and you come out of it into the larger world, it’s obviously going to feel as if most people just stick with different views on some basic and very important values. … It’s not easy; few can exist comfortably for a long period of time in such a tense atmosphere.”

So perhaps those record-high numbers for Putin are thanks in part to newfound support among his former critics. Or perhaps they are thanks to the fact that most of those critics have already left.