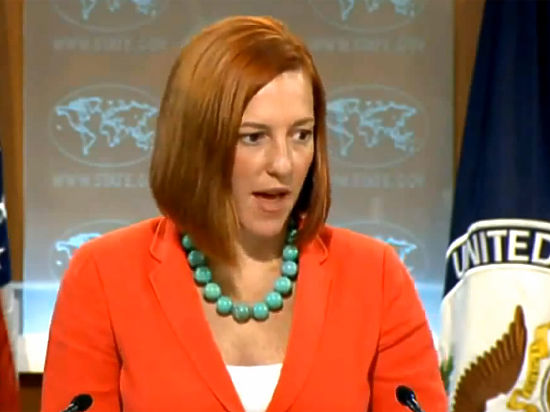 The boom in linguistic borrowings from English into Russian came to an abrupt end in 2014, psycho-linguist Aleksey Mikheyev says, with only two such terms entering everyday language – “selfie” and “fake.” But in their place arrived a large number of new words reflecting and thereby intensify hatred of Ukraine and the West.

Mikheyev tells “Moskovsky Komsomolets” that the appearance of new words is important because “events in the world define the words we use. But there is a reverse process, one in which events in a definite way are colored and acquire this or that shade of meaning thanks to the words which we use to describe them”.

And he says that the two most frequently used new words in Russian over the last 12 months were “Krymnash” (Crimea is Ours) and “psaknut’” (a reference to a US State Department spokesman that is commonly defined by Russians to mean “to say something stupid but not admit it”).

“Unfortunately,” the linguist continues, “2014 was a year of the expansion ofhte lexicon of anger and hatred. Its chief characteristic was the manipulation to one or another degree of mass consciousness by the use of aggressive formulations. In the conflict situation, words became a weapon, and in 2014, this problem eclipsed all others.”

But compared to the year before, the number of new words entering widespread use among Russians was relatively small, in large part because of the decline of the application of “-ing” ending to the names of Duma members to indicate certain habits of thought such as “mizuling” or “pekhting.”

Another aspect of this, Mikheyev says, is a process by which broader meaning is given to particular place names like Bolotnaya which has become a symbol of liberalism and Pokonnaya which is linked to conservatism. How long that will prove to be the case is very much an open question, the linguist says.

One word that entered the language briefly in 2014 but has since disappeared is “depardirovat,” a reference to Gerard Depardieu’s decision to take Russian citizenship and one formed by combining his name with the more familiar verb “deportirovat” but with the new one having the opposite meaning.

The verb “psaknut” which derives from the name of Jane Psaki of the US State Department may have a similar fate, although at present it is generating terms like “psaki” which Russians are applying to statements by anyone that are deemed to be unreliable but presented in a sententious fashion.

Another category of terms likely to be short-lived are “euphemisms” like “humanitarian convoy” and “polite people” by which “the authorities seek to avoid conflict even if someone will call these hypocritical.” Mikheyev adds that he hopes that in the new year, “good sense will win out.”

And he concludes that the Russian people not their rulers will ultimately decide on the directions their language goes, using the population to try to think about others not with the negative words that many are using now but with more positive ones. If people do that, Mikheyev says, they will be surprised at how different the world looks.

By Paul Goble, Window on Eurasia.