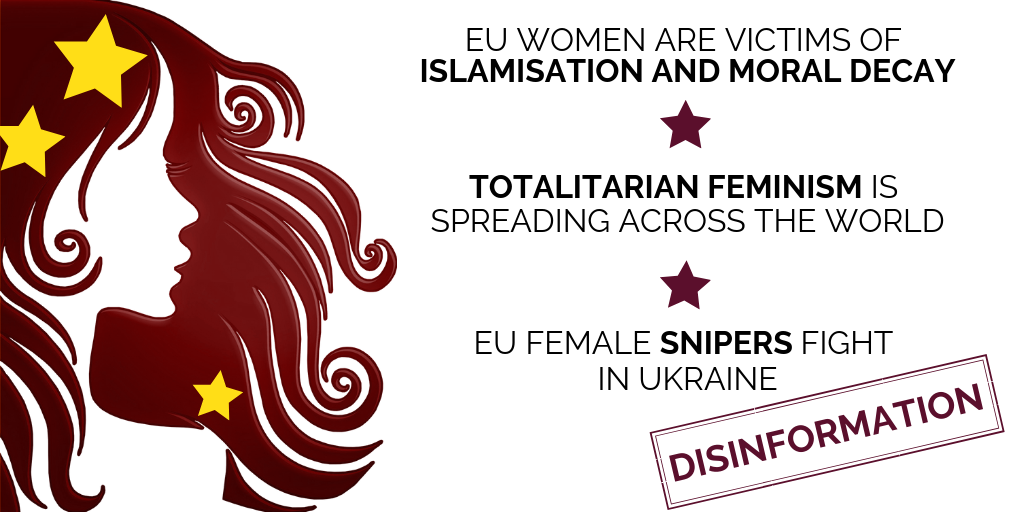 The EU is the place for women to be. And numerous initiatives taken up by EU institutions are helping women advance in their professional lives and develop personally.

However, the way pro-Kremlin outlets see it – being a woman in the West is no piece of cake.

Women, especially Western women, are often in the scope of pro-Kremlin disinformation. For example, in the well-known disinformation narrative about the inevitable Islamisation of Europe, they play a substantial role. Women are, supposedly, the first victims of the migration wave. They are forced to prostitute themselves for migrants, to wear hijabs or even to undergo genital mutilation. But they sometimes provoke immigrants, too – for example by indecent acts and clothes. In Europe they are in danger of getting raped by immigrants just about anywhere.

This absurd and deceitful narrative portrays women as victims of Islamisation, falling prey to moral and social decay. The example, as pro-Kremlin media would say, comes from the top – and European female leaders have been objects of disinformation, too. On a more general note, they have faced claims that they do not have children, as they do not care about the world’s future. But they have been targeted individually, with attempts to discredit their leadership tailor-made to particular audiences. Dalia Grybauskaite, Theresa May and Angela Merkel all got their share of this type of targeting.

The values-based narrative is just one of the many faces of disinformation on women. Another one in the playbook is to exploit fear – but this time, it is not fear of women getting hurt, but the fear of women themselves being a threat.

Pro-Kremlin outlets describe feminism and gender equality as threats. They have a track record of trying to defame these ideas, describing feminism as, for example, women bullying men, discouraging men’s interest in women and thereby turning men homosexual. Again, these types of messages feed into a wider narrative of the evil, decaying, immoral West, going towards a level of gender annihilation which, apparently, would not even spare Santa Claus.

A distinctive example of this anti-feminist narrative is the story by In The Now, controlled by RT, which has tried to discredit feminist activists through promoting a video with an alleged feminist who punishes men for “manspreading” on a metro train. In The Now made the video go viral, and it provoked hateful misogynistic language in the comments section of In The Now’s Facebook account. But the authenticity of the original video, which was produced in Russia, has been questioned by journalistic investigations.

In the disinformation world, a woman can be a victim of feminism or moral decay – but at the same time, she can be a powerful soldier. Female snipers have been a theme of another narrative: they were used as ‘proof’ of increased violence in Ukraine – women from the Baltic States were supposedly arriving in Donbas, whereas Polish snipers allegedly appeared in Mariinka to support the Ukrainian army.

These types of stories have enjoyed a long life in Russian military folklore. But it still does not mean they are true.