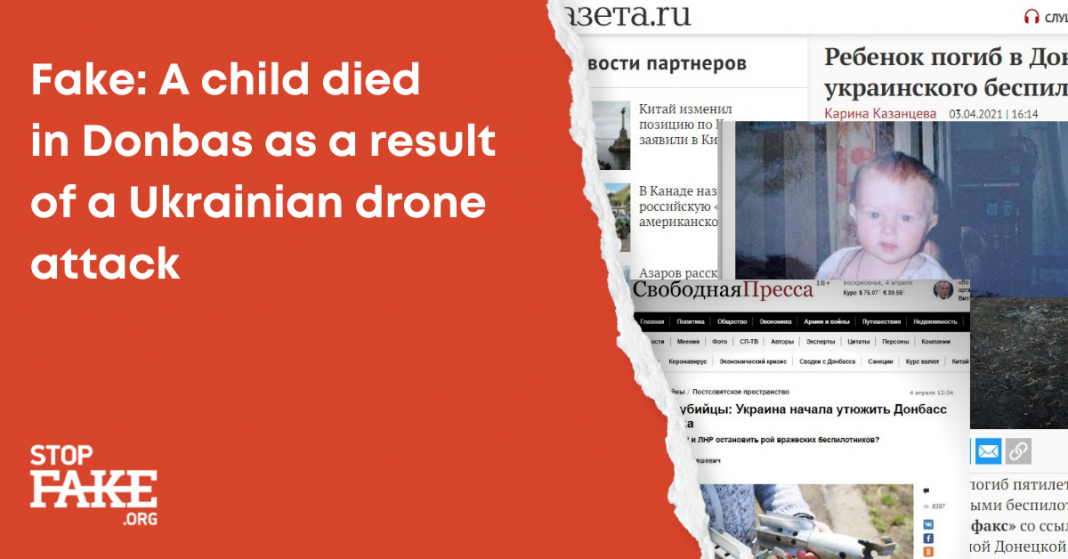 On April 6, the OSCE Special Monitoring Mission to Ukraine confirmed the death of the child. He reportedly died “due to blast trauma and shrapnel wounds.” There is no information that the child died as a result of a strike by a Ukrainian drone. Also, the report says that ‘non-government-controlled’ Oleksandrivske is located approximately 14 kilometers from the contact line, while the military expert Oleksandr Kovalenko provided his calculations and indicated a distance of 27 kilometers. On April 4, the pro-Kremlin outlet News Front published the name of the deceased, and also showed his photograph.

Russian and pro-Kremlin media outlets Gazeta.RU, Kommersant, RBC, Fontanka.RU, RIA Novosti, Lenta.ru, Free Press, Interfax, and others spread information that a child allegedly died as a result of a Ukrainian drone attack in the uncontrolled by Kyiv part of Donbas. In these reports, the propaganda machine refers to the “people’s police” of the so-called “Donetsk People’s Republic”, which made a similar statement on April 3.

“Militants of the 59th brigade of the Armed Forces of Ukraine, following the illegal order of their leader Shapovalov, used an unmanned aerial vehicle equipped with an improvised explosive device. As a target for a terrorist act, Ukrainian militants have chosen a residential area of ​​the settlement of Oleksandrivske, where they dropped an explosive device near a house, the people’s police website reports. At that time, there were two civilians in the yard … a child born in 2016 was killed, and a local resident received wounds of varying severity,” the media write.

Some groups on the social network Vkontakte also published a photo that allegedly depicts the killed child.

“A five-year-old boy died today. And the president of the country, who gave the order, did not even express his condolences to his family and did not promise to investigate what happened. I consider it necessary for the OSCE PA and the PACE, where they like loud statements, to call this out and demand explanations from the Ukrainian leadership,” Volodin said.

Did the child really die?

Neither the “people’s police” nor the Russian media provide any details of what happened: there are no comments from relatives, no photos from the scene, no name of the murdered child. The only thing that the representative of the so-called “DPR” said at the briefing on April 3, that the child died at the address of 36, Druha (2nd) Dorozhna str. in the settlement of Oleksandrivske.

StopFake contacted the press service of the Joint Forces Operation and asked if they were informed about the dead child. The service told us that they had seen reports from the Russian and pro-Kremlin media but had no information to confirm them. As of 4 April, the child’s death was not reflected in the latest report of the OSCE Special Monitoring Mission on 3 April.

“Yes, it happened yesterday, but not because of a drone. I am from this village. The owner had a mine, and his grandson found it. I do not understand why people are lied to. My condolences,” she wrote.

StopFake decided to verify this version. We tried to contact “Valentyna Iskrytska”, but did not receive a response from her at the time of publication. We found contacts of a person who used to live in Oleksandrivske and still has relatives and acquaintances there. Oleksandr (the name was changed at the man’s request due to the threat of his family’s persecution – ed.) confirmed the version that the child’s death was the result of an accident.

“They say, the man brought home all sorts of rubbish – ammunition. One of the explosive items was at his house and detonated. As my friends told me, there was no “whistling” sound: usually, when a shell flies, it “whistles”. And this time there was nothing, just an explosion – and the child was killed,” he said.

The accident version sounds even more convincing due to the geographical location of the settlement Oleksandrivske. According to a military and political observer Oleksandr Kovalenko, the distance from Oleksandrivske to the territory controlled by Kyiv is about 30 kilometers, and a military drone of the Armed Forces of Ukraine will simply not be able to fly all the way there.

This is all because the village of Oleksandrivske, where the tragic incident took place, deeply in the occupied territory, and a drone of the Armed Forces is simply not able to fly there,” he wrote on Facebook, adding the relevant screenshots.

The Joint Forces Operation’s press service also confirmed to StopFake that their drones are not able to cover such a distance with ammunition and point to the fake nature of such news.

“They would have to refer to something in their resources. Some witness comments, the child’s name. We have aslo read that an elderly woman was injured, but there are no comments from her. This is just another fake,” the press service said.

It should be noted that some media outlets indicated that the incident took place in the village of Oleksandrivka, which is near the delimitation line. However, the representatives of the so-called “DPR” meant specifically Oleksandrivske. This is evidenced by a screenshot from the briefing, which shows “Oleksandrivske”, and the map also coincides with this settlement.

The photo published on social networks has nothing to do with the incident.

Google’s image search helped to reveal that this photo was actively published in 2014. For example, the pro-Kremlin media outlet Komsomolskaya Pravda in Ukraine claimed that the photo showed five-year-old Ivan Yermilov, who died near Luhansk.

His death was also reported by BBC Ukraine with reference to the Donetsk Railway’s press service but without his photo. Some groups later corrected this information.