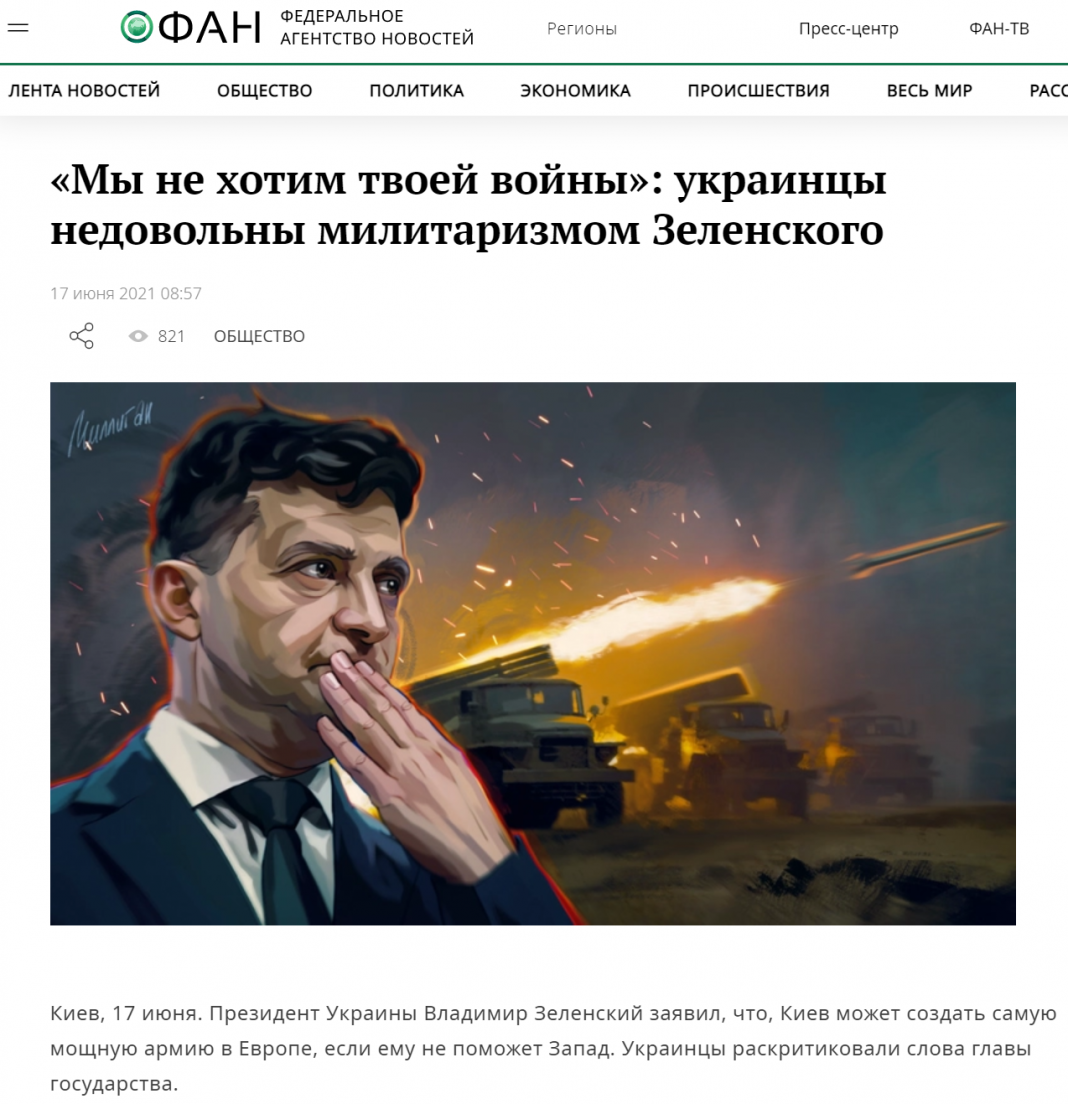 The results of a recent poll show that more than 70% of Ukrainians consider there is a war between Ukraine and Russia and only 3% think there is a civil war in eastern Ukraine inspired by the Ukrainian authorities. 70% also believe that the main obstacle preventing the end of the war in Donbas is the unwillingness of the Russian authorities to end this conflict.

Several Russian publications featured stories last week claiming that Ukrainians are dissatisfied with the militarism of President Volodymyr Zelensky and are in favor of ending the war in Donbas. Regnum, FAN, RU News, DPR hotline and others featured various versions of this fake story.

These fake stories sprang from an interview that Ukrainian President Volodymyr Zelensky gave to Agence France Presse, Reuters and the Associated Press, the text of which was published on the official presidential site on June 16. Asked how Ukraine can pressure the West to do something about the war in eastern Ukraine, President Zelensky replied that the war is not only a Ukrainian territorial conflict, it is a war in Europe. “Everyone should understand that any other country could be in our place. If Ukraine is to resolve this global problem all on its own, we will have no recourse but to become a very strong, most powerful army in Europe, weapons and personnel wise” Zelensky said.

In response to the Zelensky interview the Russian news site Regnum featured a story entitled Ukrainians to Zelensky: We want peace, we don’t want your army and war. The author Oksana Peremozhenko who refers to herself as a “polite woman from Odesa who does not welcome Ukrainian historians who are eager to rewrite the country’s history in favor of anti-Russian policy” analyzes comments from the Sharyi.net site, a purported news site owned by Anatoliy Sharyi, a Ukrainian national who lives in the Netherlands. Sharyi is a pro-Kremlin blogger and politician who is consistently against Ukrainian independence and the Ukrainian language. Peremozhenko concludes that readers’ comments on the Sharyi site show that the majority of Ukrainians are “against Zelensky’s war” and militarism.

Writing for the web site Ukrainska Pravda in November 2020 Oksana Moroz channels and concluded that the majority of Sharyi.net’s audience is Russian. A similar analysis of Sharyi’s propagandist activity by Radio Liberty in June 2021 drew the same conclusion. In November 2020 52% of the views of Sharyi’s You Tube channel came from Russia, only some 25% of the viewers were from Ukraine. Furthermore, the audience that watches Sharyi’s YouTube channel is in no way representative of Ukrainian majority opinion.

The claim that Ukrainians “don’t want Zelensky’s war” is a patent untruth. In a study conducted in April 2021 by the Ukrainian Institute for the Future, 64% of Ukrainians said that the conflict in Donbas is a war between Russia and Ukraine and only 3% said the conflict was a civil war inspired by Ukrainian authorities. A similar study conducted by the reputable Razumkov Center and Democratic Initiatives pollsters from May 14-19, 2021 on Ukrainian attitudes to the Russian-Ukrainian war during the Zelensky presidency yielded similar results. 71% of respondents said they were certain the conflict in Donbas was a war between Ukraine and Russia.

The assertion that Ukrainians are dissatisfied with Zelensky’s “militarism” is also not confirmed by the most recent opinion polls. A study by the Ukrainian Institute for the Future, conducted during the escalation of the conflict in Donbas, shows that in the case of a hypothetical deployment of Russian troops to the borders of Ukraine, more than half of the respondents (51%) believe that protecting the border militarily with full troop mobilization and preparing for an imminent attack by Russia is the best decision on the part of the Ukrainian authorities.

The Razumkov Center and Democratic Initiatives poll also showed that about 20% of respondents believe that in order to achieve a lasting peace in Donbas, diplomatic pressure on Russia and the so-called Donetsk and Luhansk People’s Republics should be continued. At the same time, about 19% of respondents are in favor of strengthening the economic and military potential of Ukraine, and 13% support  the systematic preparation for the liberation of the occupied territories.

Both polls also show that 70% of Ukrainians believe the main reason preventing the end of the war in Donbas is Russia’s unwillingness to end the conflict.