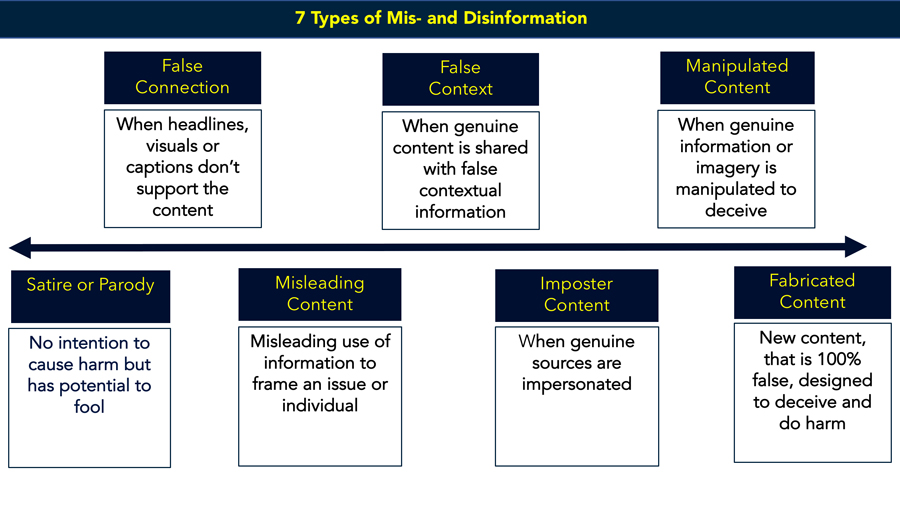 To understand the misinformation ecosystem, here’s a break down of the types of fake content, content creators motivations and how it’s being disseminated By now we’ve all agreed the term “fake news” is unhelpful, but without an alternative, we’re left awkwardly using air quotes whenever we utter the phrase. The reason we’re struggling with a replacement is because this is about more than news, it’s about the entire information ecosystem. And the term fake doesn’t begin to describe the complexity of the different types of misinformation (the inadvertent sharing of false information) and disinformation (the deliberate creation and sharing of information known to be false).

To understand the current information ecosystem, we need to break down three elements:

This matters. As Danah Boyd outlined in a recent piece, we are at war. An information war. We certainly should worry about people (including journalists) unwittingly sharing misinformation, but far more concerning are the systematic disinformation campaigns. Previous attempts to influence public opinion relied on ‘one-to-many’ broadcast technologies but, social networks allow ‘atoms’ of propaganda to be directly targeted at users who are more likely to accept and share a particular message. Once they inadvertently share a misleading or fabricated article, image, video or meme, the next person who sees it in their social feed probably trusts the original poster, and goes on to share it themselves. These ‘atoms’ then rocket through the information ecosystem at high speed powered by trusted peer-to-peer networks.

The Different Types of Mis and Disinformation

Back in November, I wrote about the different types of problematic information I saw circulate during the US election. Since then, I’ve been trying to refine a typology (and thank you to Global Voices for helping me to develop my definitions even further). I would argue there are seven distinct types of problematic content that sit within our information ecosystem. They sit on a scale, one that loosely measures the intent to deceive.

If we’re serious about developing solutions to these problems, we also need to think about who is creating these different types of content and why it is being created.

I saw Eliot Higgins present in Paris in early January, and he listed four ‘Ps’ which helped explain the different motivations. I’ve been thinking about these a great deal and using Eliot’s original list have identified four additional motivations for the creation of this type of content: Poor Journalism, Parody, to Provoke or ‘Punk’, Passion, Partisanship, Profit, Political Influence or Power, and Propaganda.

This is a work in progress but once you start breaking these categories down and mapping them against one another you begin to see distinct patterns in terms of the types of content created for specific purposes.

As this Buzzfeed article highlights, a group of US Trump supporting teenagers have connected online to influence the French election in April. They have shared folders of sharable ‘meme-shells’ so even those who can’t speak French can drop visuals into hashtag streams. It’s now incredibly easy for loosely connected groups to mobilize, using free tools to co-ordinate private messaging.

When messaging is co-ordinated and consistent, it easily fools our brains, already exhausted and increasingly reliant on heuristics (simple psychological shortcuts) due to the overwhelming amount of information flashing before our eyes every day. When we see multiple messages about the same topic, our brains use that as a short-cut to credibility. It must be true we say – I’ve seen that same claim several times today.

On the night of the Inauguration attendees at the Deploraball boasted to This American Life they “memed” Trump into the White House. Listen to an excerpt.

What can we do?

We all play a crucial part in this ecosystem. Every time we passively accept information without double-checking, or share a post, image or video before we’ve verified it, we’re adding to the noise and confusion. The ecosystem is now so polluted, we have to take responsibility for independently checking what we see online.

In the weeks after the US election, we saw journalists track down fake news creators. One consistent element was that creators talked about trying to create news that would fool people on the Left and how they failed.  As fake news creator Jestin Coler told NPR, “We’ve tried to do similar things to liberals. It just has never worked, it never takes off. You’ll get debunked within the first two comments and then the whole thing just kind of fizzles out.”

But liberal debunking primacy was short lived. Since Trump’s inauguration, we’re seeing both sides falling for and sharing false information.Whether it’s the ‘rogue’ Twitter accounts that no one has been able to independently verify, the Trump executive order meme generator, users re-tweeting a post by Jill Stein’s parody account desperately wanting it to be real, or claiming Vice-President Pence has deleted a tweet condemning the Muslim ban when it was still sitting on his timeline from December, the Left is showing that it is just as human as the Right. When humans are angry and fearful, their critical thinking skills diminish.

Craig Silverman was a guest on the “On The Media” radio show and talked about the need for emotional skepticism. I couldn’t agree more. This isn’t just about funding more news literacy projects, this is about teaching people to second guess their instinctual reactions. If you find yourself incredibly angry at a piece of content or feeling smug (because your viewpoint has been reaffirmed), take another look.