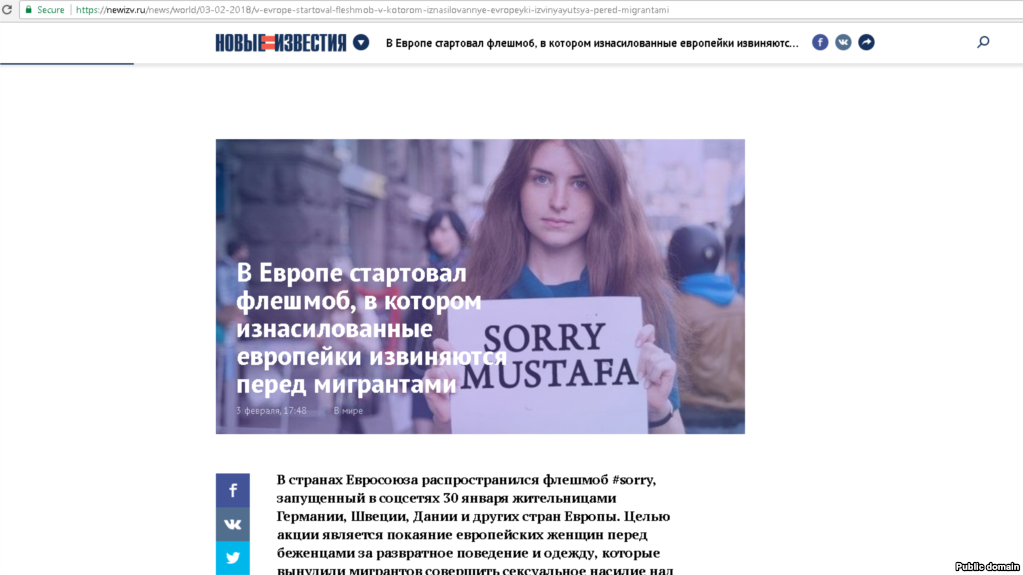 “In the EU countries, the flashmob #sorry launched by residents of Germany, Sweden, Denmark and other European countries has spread. The aim of the action is for European women to apologize to refugees for their depraved behavior and clothing that forced migrants to commit sexual violence against women.”

There is no evidence for the existence of this flashmob.

On February 3, a number of Russian news sites posted a story claiming that European women were participating in an online flashmob — #sorry. According to the story’s headline, the women were victims of sexual assault who were “apologizing” to migrants from Muslim countries for their “depraved behavior and clothing” that “forced” the migrants to commit acts of sexual assault. The story appeared on numerous Russian-language media sites, including Novye Izvestia, Panorama, E-News, and Russian social media sites like Odnoklassniki. The text of the headline and article appears to be the same on all the sites, although some shortened the story by omitting several paragraphs. The article was frequently accompanied by a photo of a European girl holding a sign that says “Sorry Mustafa.”

Google results for the headline of the fake story.

The first problem with the story is that the photo has been doctored: it was actually taken in October 2014, of a girl participating in a Ukrainian awareness-raising action called #ZahriyHeroya (Warm a hero), which was aimed at calling attention to the condition of Ukrainian soldiers at the front during winter. Photos show other Ukrainians holding the same sign as the girl, which actually reads: “Cold? Think about those who are sleeping in the trenches.”

As for the #sorry flashmob, searches of Twitter and Instagram turned up nothing like what was described in the article. Moreover, the article does not substantiate a quote from the event’s supposed organizer, identified as “Britta Borg.” Google searches reveal nothing about the action or “Britta Borg,” although Brita Borg was a Swedish pop singer who died in 2010.

Some versions of the article included a story taken from The Daily Mail, about a Norwegian man who purportedly felt “guilty” over the deportation of a Somali man who had sexually assaulted him in 2011. This story had nothing to do with the alleged “flashmob” cited in the February 3 article’s headline and text. Nor did the Norwegian rape victim apologize to his rapist. Rather, he was reacting to hearing that his attacker was set to be deported after serving four and a half years in prison.

“I felt relief and happiness that he would be gone forever,” The Daily Mail quoted the victim, Karsten Nordal Hauken, as saying. “I felt like the Norwegian State had taken responsibility to carry out the ultimate revenge, like an angry father confronting it’s child’s attacker. But I also had a strong feeling of guilt and responsibility. I was the reason that he would not be in Norway anymore, but rather sent to a dark uncertain future in Somalia.”

Russian media has often spread stories about Muslim migrants sexually assaulting European women with impunity. Such stories often are either highly distorted or, in some cases, completely fabricated. One example of the latter was the story of Liza, a 13-year-old Russian girl living in Germany, who was allegedly raped by a Muslim migrant. Not only did this story appear on major Russian state news outlets, but it was repeated as true by representatives of Russia’s Foreign Ministry. The girl confessed that she had made up the story to explain her absence from home.

Even Russian President Vladimir Putin was duped by his own state media’s claims about migrants in Europe. In November 2016, Putin referenced a case in Austria, where a court allegedly acquitted a Middle Eastern refugee for sexually assaulting a boy in a public pool. Putin said the court had set the refugee free because he supposedly could not understand that the boy was saying no. This mirrored a claim made by Russia’s state-owned Channel One a few days earlier. In fact, the immigrant was not acquitted and was in state custody at the time.