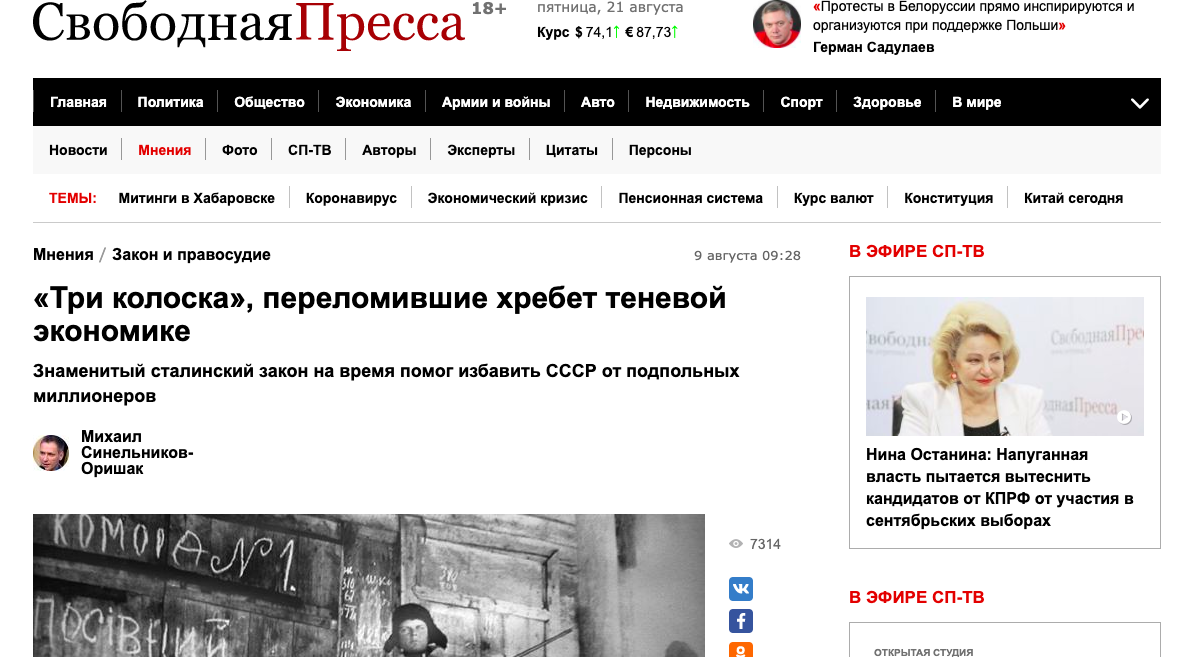 Another historical distortion denying Stalinist repressions is spreading on social media. Posts about the 1932 Soviet law “On the protection of Socialist Property”, better known as the Zakon o koloskakh, the Law of Spikelets attempt to justify the cruelty of the Soviet system towards its own citizenry.

Thanks to this law the plundering of socialist property was suppressed, assures a Facebook post, claiming that Stalinist repressions weren’t really that horrible and were only aimed at “strengthening the Soviet economy” and not the destruction of its own citizens. This law broke the back of the Soviet shadow economy claims the DNR Iskra web site, and temporarily helped rid the USSR of underground millionaires, according to the Svobodnaya Presa publication.

In fact this Stalinist law led to a man-made famine in parts of the Soviet Union and particularly in Ukraine, where the Holodomor claimed millions of lives

On August 7, 1932, the Decree about the Protection of Socialist Property proclaimed that the punishment for theft of kolkhoz or cooperative property was the death sentence. This law was personally attributed to Joseph Stalin.

According to Ukrainian historian Serhiy Hromenko, Russian demographers knew about the human losses of the collectivization policies. In total about 7 million people starved to death in the Soviet Union during 1933, four million of those were victims of the Holodomor, the man made famine in Ukraine. Another 1-1.5 million died from hunger in Kazakhstan, the rest of the victims lost their lives in the Volga region, on the Don, in the Kuban. Russian propaganda that claims there were no casualties during this time is a pure lie, says Hromenko.

Mass grave of those who starved to death in Kharkiv oblast. Archival photo, 1933. Photo Alexxander Vinerberger

In 1933 the death rate in Ukraine reached catastrophic proportions, 28,000 people died every day, 1168 died every hour, 20 Ukrainians died every minute, according to Hromenko.

The Stalinist regime used the confiscation of food from the peasants as a weapon of mass destruction – food was forcibly taken from the farmers, due to hunger the peasants were forced to sell their last belongings that had not been confiscated by the Soviet authorities, for a pittance.

Hromenko explains that in 1927-1930, the most prosperous peasants were dispossessed and deported to Siberia: their houses, cattle, property were confiscated. When the Holodomor began people went to a special organization “Torgsin” – a chain of stores that bought gold and luxury goods for next to nothing and sold them abroad for foreign currency. Confiscated grain was also sold abroad for foreign currency. With this currency machinery, equipment and even entire factories were purchased in the United States surging the Soviet Union forward economically.