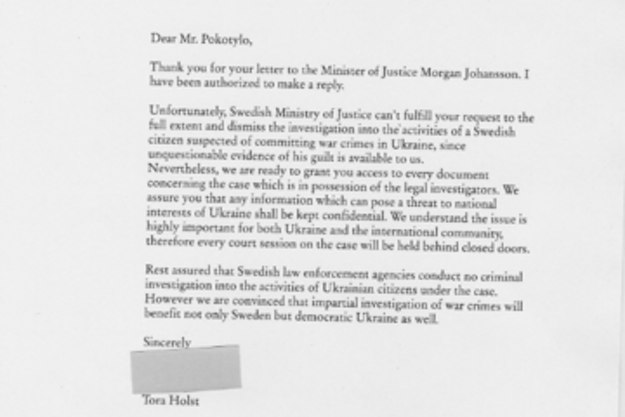 The letter has become a news story on Russian television and on CNN iReport. It’s written on paper marked “Ministry of Justice Sweden” and is addressed to Oleksiy Pokotylo, “Head Department for National Security and Defense Affairs” in Ukraine.

The letter is signed by Tora Holst, chief prosecutor at the International Public Prosecution Office in Stockholm and is an answer to what seems to be a Ukrainian request to the Swedish Minister for Justice, Morgan Johansson.

“Unfortunately, Swedish Ministry of Justice can’t fulfill your request to the full extent and dismiss the investigation into the activities of a Swedish citizen suspected of committing war crimes in Ukraine, since unquestionable evidence of his guilt is available to us”, the letter says.

The letter also assures that Mr Pokotylo will have access to every document concerning the case and that Ukrainian interests will be protected.

“We assure you that any information which can pose a threat to national interests of Ukraine shall be kept confidential. We understand the issue is highly important for both Ukraine and the international community. Therefore every court session on the case will be held behind closed doors.”

According to chief prosecutor Tora Holst, the letter is fake. She claims she hasn’t written it.

– I wonder who is to gain from this. I’ve asked our communication department to contact CNN to tell them that the story is incorrect and ask them to remove the letter, Tora Holst says.

She has also asked the court’s security manager to look into the matter.

Holst believes the letter is connected to the fact that the International Public Prosecution Office is currently investigating suspected war crimes, allegedly committed by a person living in Sweden.

– Hardly any information has been issued by us about this investigation. There’s nothing in this letter that comes from me, says Tora Holt.

Would you as a prosecutor use official government paper for this kind of letter?

– No. If the government had asked me to answer a question, which has never happened, I would have used our own paper.

This is not the first time a letter involving Sweden and Ukraine is creating headlines. In February a photo of a letter from the Minister of Defence, Peter Hultqvist, about arms sales to Ukraine raised questions.

The Swedish Ministry of Defence quickly declared that the letter was a fake and the origin of it is still unknown.

The letter concerning the investigation of war crimes indicates that Ukraine wants to influence the judicial process and that Sweden is prepared to take Ukranian interests into account. Björn Palmertz, senior analyst at the Swedish Defence University, says the aim is to create suspicion.

– It’s obvious that the purpose is to discredit both Sweden and Ukraine and to imply a connection between the two countries.

The object, if Russia is behind it, could be to support the notion that Russia is being opposed by its neighbours, says Mr Palmertz, adding that the origin of the letter is still unknown.

Why bring Sweden into this?

– It’s part of the Russian agenda to create a picture where Sweden is part of the geopolitical ambitions of the West and therefore poses a threat.