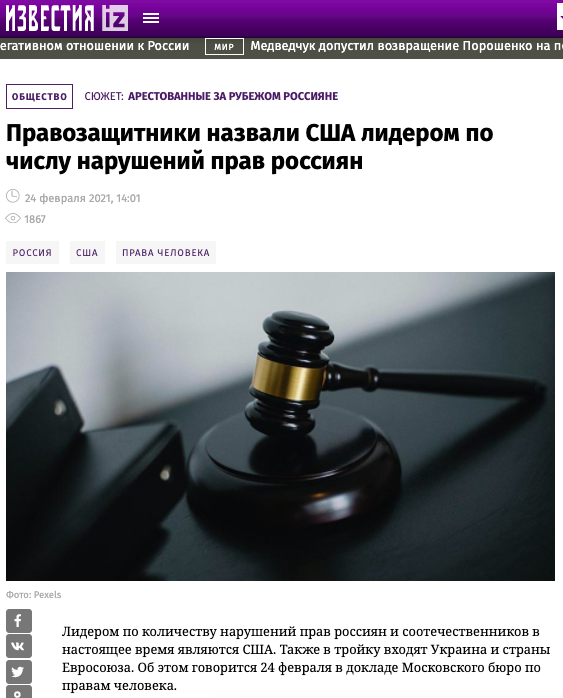 Russian media have been busy disseminating the Moscow Bureau for Human Rights report which claims that the United States, the Baltic countries and Ukraine “violate the rights of Russians” the most. Ukrainian violations of Russians’ rights are so beastly according to this report, that they “have all the signs of genocide and are deliberate Ukrainian state policy”.

Discrimination against the Russian language

The report and its Russian media coverage once again resort to the language issue in an effort to present a picture of the Russian language being discriminated against. We at StopFake have debunked many stories from this fake nefarious narrative.

Presently, the policy of ousting the Russian language, the forcible Ukrainization of the Russian speaking population consistently pursued by the Ukrainian authorities since 2014 has received a powerful impetus” the Moscow Bureau for Human Rights report reads.

Accusations against Ukraine regarding alleged discrimination against Russian speakers simply do not hold water. Any attempts by Ukraine to support the Ukrainian language in all spheres of life are immediately branded by Russia and Russian media as an attack against the Russian language. A recent study shows that the use of Russian on television continues to rise, while the use of Ukrainian still languishes and is significantly lower than the 75% stipulate by law.

According to a recent monitoring analysis by the volunteer group Liberty Space, the majority of Ukrainians support Ukraine’s language law intended to promote the use of Ukrainian, however Russian continues to dominate on the internet, in the media and in Ukraine’s largest cities. The vast majority of newspapers and magazines are published in Russian. The only platform where Ukrainian predominates is radio. The prevalence of Ukrainian in education and the service sector has increased perceptibly, however the use of Russian continues to dominate in the public sphere.

Attacks on a shared historical past

Ukraine’s de-communization program (the removal of Communist statues, renaming streets which were named after Communist Party functionaries, etc.) is a favorite whipping boy of Russian propaganda and the Moscow Bureau for Human Rights report willingly joins in this endeavor, calling the program “an attack on our common historical past”. The vandalizing of monuments to the Communist Marshal Zhukov and the Odesa monument honoring the liberation of the port city from Nazi occupants are called violations of the rights of Russians by the report.

Fakes about Ukraine demolishing this or that monument dedicated to Soviet soldiers and World War II heroes periodically appear in the Russian media. StopFake also debunked many such fakes. The laws governing the process of de-communization apply only to the symbols of the communist totalitarian regime. This legislation does not apply to monuments and memorial s to anti-Nazi resistance, or to statues that commemorate the expulsion of Nazi occupiers from Ukraine nor to monuments that celebrate Ukrainian science and culture. Another Ukrainian law provides for the protection and preservation of monuments and memorials honoring the participants and victims of WWII.

A separate section of the report focuses on the alleged violations of the rights of “Russian compatriots in the ongoing conflict in south-eastern Ukraine”. The report repeats well-rehearsed Kremlin tropes that Ukraine is sabotaging the Minks peace agreements, continuing military operations and violating the cease fire regime.

This means that the Russian speaking population is faced with the daily threat of loss of life, physical harm, the loss and destruction of property. These actions are taking place during peacetime, they are a targeted policy that Ukraine is carrying out on a state level, and these actions should be considered war crimes and crimes against humanity, having all the elements of genocide against the Russian speaking population of southeastern Ukraine” the Moscow report reads.

The report completely ignores the role of the Russian Federation in the Donbas war, something that has been well documented by outside sources and organizations. While Ukraine has no plans to step away from the Minsk agreement, Russia regularly violates it. At the end of February for example, pro-Russian forces fired at Ukrainian positions with weapons that are prohibited by the Minsk accords.

The Moscow report also accuses Ukraine of arresting Russian speakers for “farfetched reasons”. No specific examples of such arrests are given, but the report references the July 2020 arrest of Russian private military company mercenaries in Belarus.  Several members of the Wagner group had participated in the war in Donbas and Ukraine demanded their extradition, Minsk however returned all the Wagner detainees to Russia.

The recent closing of television channels belonging to Ukrainian MP Taras Kozak, a member of the pro-Kremlin Opposition Bloc for Life is also classified as persecution of Russian speakers by the Moscow report. Kozak’s stations were sanctioned after an investigation uncovered that his occupied territory coal supply schemes were supporting terrorism.

The Moscow Bureau for Human Rights report does not provide any sociological or political data to support its claims, nor do they refer to any studies to support their claims. Their sources are either pro-Kremlin Russian media or official statements made by Russian Foreign Ministry spokeswoman Maria Zakharova.