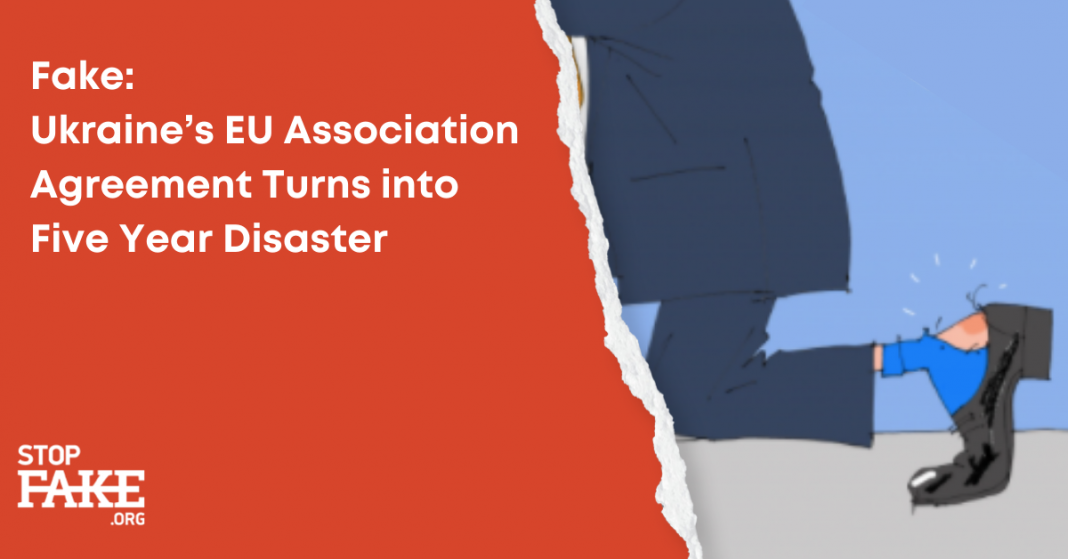 The recent meeting of the EU-Ukraine Association Council and the ensuing discussion about revising the Association Treaty between Ukraine and the EU has brought on a surge of Russian disinformation and propaganda about Ukraine’s European choice. Russian media have always been critical and disparaging about Ukraine’s European aspirations and in the last weeks have taken to pronouncing that the EU-Ukraine Agreement is “a five year catastrophe in all spheres of life”.  Keeping mum about Russia’s annexation of Ukraine’s Crimea and Russia’s financing of the war in eastern Ukraine, which have significantly impacted on Ukraine’s economic situation, the newspaper Vzglyad and the web newspaper Regnum.ru  shamelessly blame the Agreement for Ukraine’s economic and political woes.

Ukraine has fulfilled the 10-year Agreement by 41.6% in the first 5 years of its operation  according to the Ukrainian Center for European Policy, in February 2021 the parties to the agreement confirmed further integration steps and readiness to continue cooperation.

Signed in 2014 and effective since September 1, 2017, the Ukraine-European Union Association Agreement commits Ukraine to economic, judicial and financial reforms to bring its policies and legislation in line with those of the EU, while the EU commits to provide Ukraine with political and financial support, access to knowledge and research and preferential access to EU markets.

In discussing the Association Agreement, the Vzglyad article resorts to oft repeated Russian disinformation tropes – that Western countries provoked a coup in Ukraine because former President Viktor Yanukovych refused to sign the Agreement which was unfavorable to Ukraine, that the free trade aspect of the agreement has had a detrimental effect on country’s economy. The article also claims that visa free travel to the EU has depopulated Ukraine, that Ukraine has lost the enormous CIS market and worsened its relations with Russia and that the EU seeks to completely colonize Ukraine.

The Ukrainian Center for European Policy is an analysis and research group that has been analyzing Ukraine’s implementation of the EU Association Agreement from 2015 through 2019.  According to their report on the status of the Agreement’s implementation, the overall progress in meeting commitments for this period is 41.6%. This includes not only sectors in which all targets have been fully met, but also intermediate results. Within this figure, 12.4% of these sectors are completely in line with EU requirements (legislation passed and /or implemented) , 10.4%  are in advanced implementation stage (legislative work done, but  not all the necessary by-laws enacted), 18.9%  in the early implementation stage (regulations and /or implementation are at an initial stage).

According to the Center’s report, the sectors where change to EU standards is most successful are government procurement, company operations, trade barriers, national security and defense, foreign and defense policy, energy, consumer protection and taxation.

The Office for the Coordination of European and Euro-Atlantic Integration in Ukraine also issued a report on Ukraine’s progress in implementing the Association Agreement in 2014-2020. According to the report, in 2020 because of the COVID pandemic, foreign trade between Ukraine and the EU decreased by 13.5%, exports – by 14.4%, imports – by 12.7% compared to 2019. In 2020, Ukrainian exporters took advantage of 32 out of 40 tariff quotas, 11 of which were used in full. 267 additional exporters the status were authorized to export to the EU.

The Ukraine-European Union Association Council met for its annual meeting on February 11 in Brussels. The Council confirmed a review of the Agreement objective and agreed to assess and review the liberalization of trade in goods within the free trade zone. Ukrainian Prime Minister Denis Shmyhal stressed that the revision of the Agreement will help increase trade between Ukraine and the EU and lead to a further convergence of Ukrainian and EU economies.