Instead of meeting Russia’s Gazprom halfway and beginning constructive negotiatiщns, Naftogaz, Ukraine’s state gas company continues to intimidate Russia without cause, declared Russia’s RT after the latest round of gas transit negotiations between Ukraine, Russia and the European Union. According to Russia’s Sputnik agency the parties cannot agree on the details of a new contract because of Ukraine’s destabilizing position. Instead of offering Russia’s Gazprom amenable terms for cooperation, Naftogaz prefers to blackmail its Russia equivalent with lawsuits, Russian media declares. 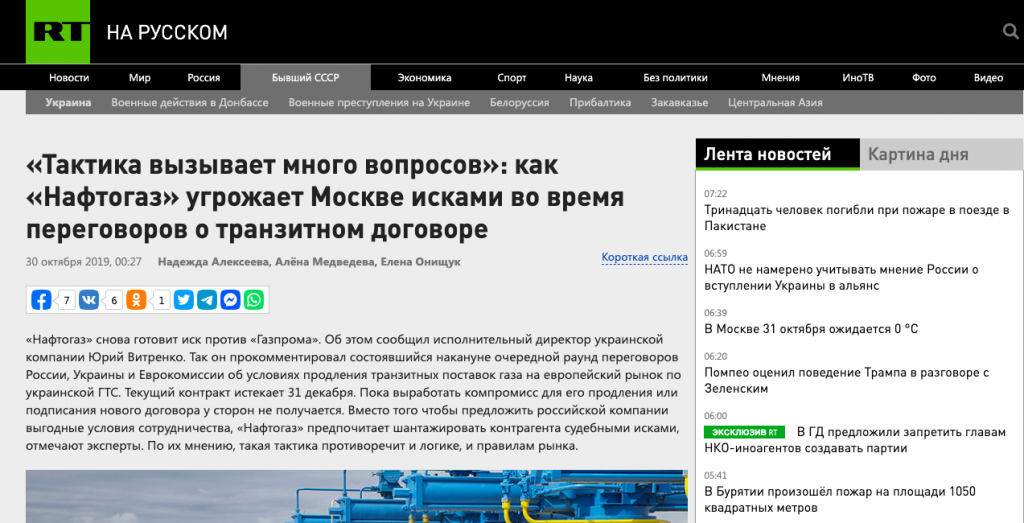 We can’t talk about an effective Ukrainian approach to these negotiations; Kyiv simply does not listen to other sides. That’s why the talks are at an impasse, despite Gazprom proposing to do away with all claims and work within the framework of European standards, RT writes. 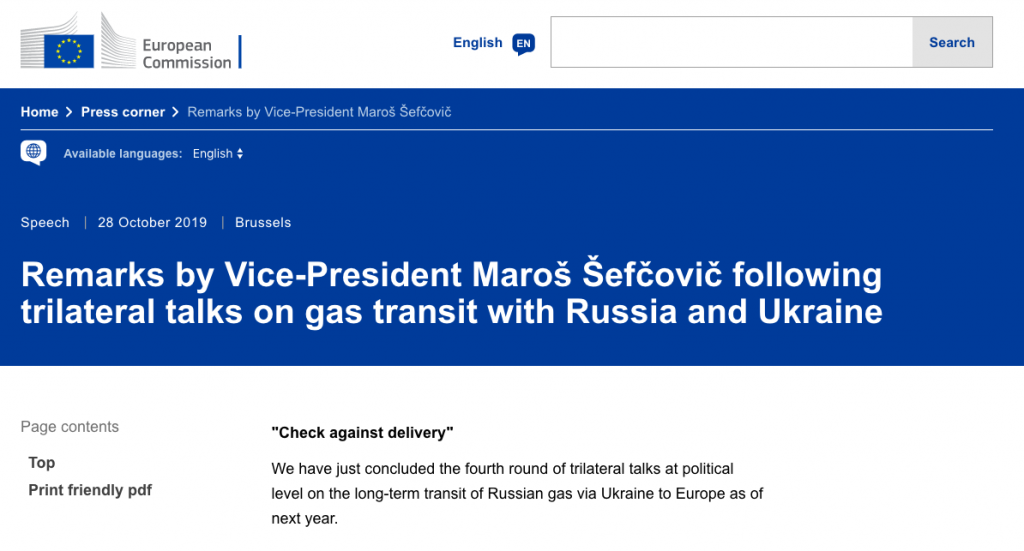 The current ten year contract for gas transit from Russia to the European Union through Ukraine expires on December 31 of this year. The latest round of three party talks took place in Brussels on October 28. The European side represented by EU energy chief Maroš Šefčovič expressed disappointment that the talks failed to yield progress, calling the Russian side unprepared to accept the proposed parameters for a new deal.

The European Union and Ukraine hold similar positions regarding a new contract with Russia. During the October meeting EU representatives proposed clear demands as to the procedure for signing a business agreement within the prescribed deadlines. Also the EU and Ukraine insist on a long term 10-year contract which outlines the volumes of gas that Russia will supply to Europe through Ukraine’s gas transit pipelines. Ukraine’s Energy Minister Oleksiy Orzhel said Ukraine is ready to sign a new contract on December 17.

The new contract must comply with European law that ownership of pipelines entering EU territory is separate to that of gas supply. Acordingly, Gazprom must conclude an agreement with Ukraine’s new independent gas transit system operator, a company not controlled by Naftogaz. A law transferring gas transit system management to the new company Main Gas Pipelines of Ukraine is in its final stages of approval by the Ukrainian parliament.

With the establishment of a separate company to oversee pipelines, Ukraine has fulfilled all requirements for concluding a new agreement with Russia. But despite the ticking clock, Gazprom has not submitted a single proposal to Ukraine for a new deal.  Furthermore, it is Russia that is resorting to its usual practice of blackmail, demanding that Ukraine abandon the Stockholm Arbitration Court ruling, according to which Russia’s Gazprom is obliged to pay nearly $2.6 billion dollars to Ukraine for disregarding the terms of the previous 10 year gas transit contract with Ukraine and defaulting on its shipment obligations.

“Russia says that Ukraine should abandon the Stockholm ruling. Russia says Ukraine should forget about the fines imposed on Gazprom by Ukraine’s Anti-Monopoly Committee because of Gazprom’s abuse of their monopoly position. Ukraine should do all this just to start the negotiation process. If this isn’t blackmail, I don’t know what is” said Naftogaz Executive Director Yuriy Vitrenko in an interview with Ukraine’s Channel 24 television station.

Gazprom issued its Stockholm Arbitration Court demand to Ukraine on October 18, stressing that a new gas transit deal could be struck only after Ukraine renounces its court victory. In response, Naftogaz said it would demand 11 billion dollars in compensation from Russia for possible gas transit disruptions to the European Union via Ukraine.

Naftogaz has said that it is ready to abandon this demand to Russia if Gazprom sits down to negotiate a new gas transit contract in good faith.