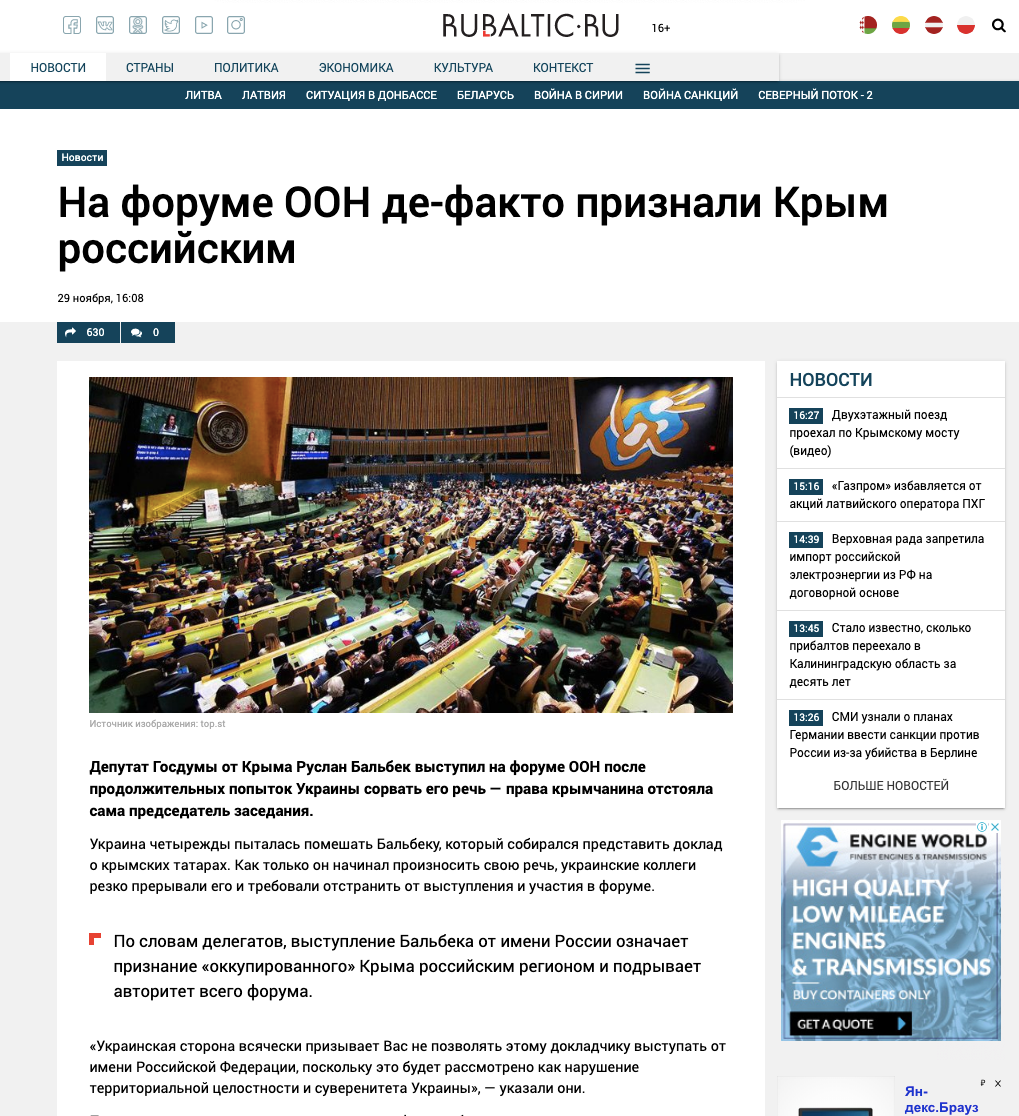 Russia brought a member of Crimea’s occupying authority to the 12th session of the United Nations Forum on Minority Issues held in Geneva last November and used his presence there to claim the UN recognized that Crimea is Russia. The claim is patently fake, as no such recognition has taken place and is highly unlikely that it ever will, as one of the most recent UN resolution calls for the withdrawal of Russian troops from Crimea and an end to the occupation of the peninsula.

NewsFront claims that Ruslan Balbek, a member of the Russian Duma from occupied Crimea was allowed to speak at the Forum and after “a victorious conclusion of his speech, the UN hall burst into applause. It turns out that the UN has recognized Crimea as Russian.”

The Russian media further claimed that Ukraine’s delegation behaved barbarically  at the session and completely angered the UN Forum leadership, who approached the Russian delegation on the sidelines and expressed words of support.

The ever reliable fake factory Ukraina.ru cites Ruslan Balbek himself, who said Ukraine launched an ideological revolt and was angry because in Crimea there are no repressions and no oppression of minorities.

On March 27, 2014 the UN General Assembly adopted Resolution No. 68/262 on the Territorial Integrity of Ukraine, declaring the referendum held in Crimea in 2014 had no validity and calling on the international community and organizations not to recognize the annexation.

In 2018 the UN again passed a resolution urging Russia to withdraw its military from Crimea and condemning the increase of Russian military in parts of the Black and Azov Seas.

And just days ago, the UN passed yet another resolution calling on the Russian Federation to stop the militarizaton of Crime, the illegal annexation of Ukraine’s eastern regions and the Crimean peninsula, and withdraw all military forces from Ukraine.

According to the Ukrainian delegation participating at the UN Forum, Russia uses all possible procedural gaps to circumvent these resolutions, directly and unequivocally confirming the illegality of Russia’s occupation of the Ukrainian peninsula. Moscow parades its Crimean collaborators as representatives of the Russian Federation in an attempt to legitimize its occupation of a part of Ukrainian territory.

The former Ukrainian presidential representative in the Autonomous Republic of Crimea Borys Babin, who attended the November forum, denied Russia’s claims that the Ukrainian delegation had attempted to disrupt Ruslan Balbek’s speech, explaining that such actions are beneath Ukrainian diplomats and government officials.