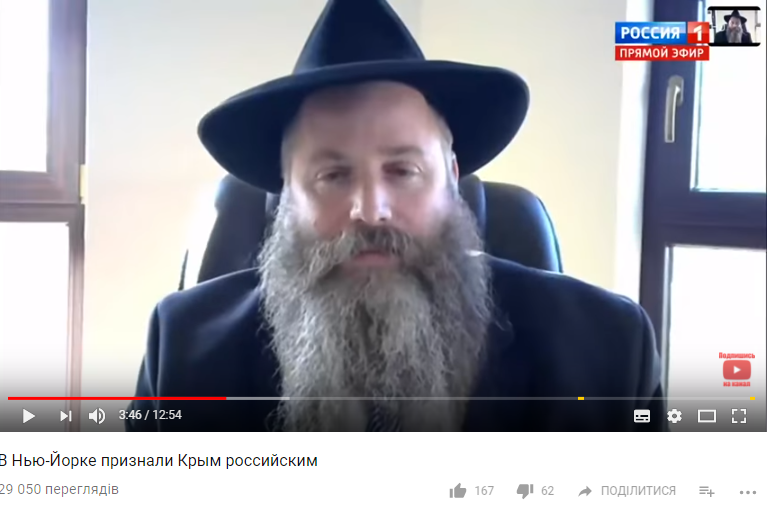 Russian media are disseminating a story claiming that the World Jewish Congress has recognized Crimea as part of Russia. The source for this claim is a statement made by Crimea’s chief rabbi Binyamin Volf.

On November 23 the daily Vesti program on Russian state Rossiya 24 television channel announced that during the World Jewish Congress gathering in New York, Crimea was recognized as part of Russia. The proof – Rabbi Volf’s conference badge which read Sevastopol, Russia. Volf speaks to the Russian program and says that since such an important and influential organization has agreed to the Russian status of the peninsula, invariably the rest of the world will soon follow suit.

“This is the most important and most influential Jewish congress, more than 5,000 Jewish leaders of world communities gather here, I believe this is a great and important event, that such an influential organization accepts Crimea as Russian land”, Rabbi Volf said.

As it turns out, both Rabbi Volf and Rossiya 24 have lied. The gathering Rabbi Volf called a World Jewish Congress was in fact the International Conference of Schluchim 2017 held this November in New York.  This is an annual gathering of Chabad Lubavitch Hasidic rabbinic emissaries and communal leaders and has absolutely nothing to do with the World Jewish Congress. The photograph that Vesti cameras pan over is the traditional photo participants take every year outside the Chabad Lubavitch world headquarters in Crown Height, Brooklyn.

Ukrainian Jewish leaders issued a statement saying that Chabad leaders informed them that no one at the conference had or ever would discuss Crimea with Rabbi Volf. His conference badge reading Crimea, Russia, is a technical glitch and does not reflect any official Chabad position.

Binyamin Volf is very pro-Russian in his views and welcomes the Russian annexation of Crimea.  He actively cooperates with Crimea’s Russian authorities and praises Russian president, Vladimir Putin. His account on the Russian social media site VKontakte is filled with photographs and posts gushing with support for the new rulers of Crimea and for “Russian civilization”.