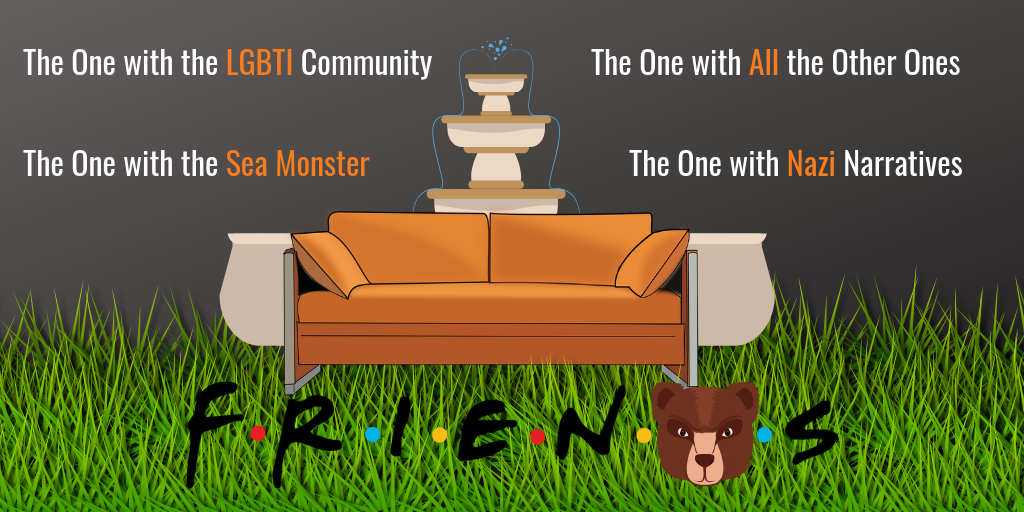 Everybody needs a friend – to laugh, cry or watch ‘‘Friends” episodes with, where every problem is solved sooner or later, because friends help each other out. Friends share their experiences, thoughts and values – and if they don’t share the latter, they listen to what the other side has to say and then engage in a respectful discussion.

But there are no friends in the West; their only aim is to destroy the East and spread their own propaganda. That’s what the pro-Kremlin media wants its audiences to believe – and the narratives they use to that end stop nothing short of hate speech.

The One with the LGBTI Community

One of the recent triggers seems to be the International Day against Homophobia, Transphobia and Biphobia on 17 May. When the British Embassy in Minsk hung a rainbow flag on its building on this day to promote equal rights for the LGBTI community, pro-Kremlin media accused the UK of ”spitting on traditional Belarusian values”, and ”behaving as if it was in an occupied land”. The LGTBI community also came under attack with narratives about “Gay Fascism in Europe” and warnings about “perverted, marijuana-smoking, prostitution-legalising, paedophilia-tolerating Europeans (including Ukrainians)” on their way to Minsk to organise Sodomy during the European Games. By the way, one of the ”Friends” supporting characters, David, went to Minsk, too. Coincidence? We think so.

We hate to report that it’s not the first time we saw these types of stories. “Threatened values” is one of the most common narratives used by pro-Kremlin outlets, and there are many disinformation cases in our database about this topic; their aim is to stoke fear of the unknown, to make people in Russia, Belarus or Ukraine afraid of losing their values and traditions. Even though this threat does not exist and the EU believes that there is a place for every culture, tradition and belief, messages about the alleged moral decay of Europe, its propaganda of perversion, feminisation of men and sodomy export spread across pro-Kremlin outlets.

The One with Nazi Narratives

On a different note, the infamous News-Front website seems to have decided to explore “ancient traditions” of anti-Semitism. According to News Front, the goal of the Jewish religion is to exterminate all non-Jews. The same outlet also attempts to prove that US military leaders viewed “The Organised Jewry” as a threat to the United States and the Western world.

An earlier publication by News Front actually manages to combine the two “threats”, allegedly posed by the LGBTI and Jewish communities, into one, praising the Nazis for ridding Germany of “The Jewish Pioneers of Sexual Degeneracy in 1920s Berlin“. But one does not have to visit the fringe websites to be showered with anti-Semitic rhetoric. Russian state TV follows its one perverse tradition of painting Ukraine as all-things-Nazi. And, according to the Kremlin’s media, the Jewish president and prime minister of the country only serve as a “cover-up”.

Conspiracies without any evidence can sometimes bring people together as friends – but in the disinformation world, it’s only possible if those friends will be pro-Kremlin and anti-West. If the saying that a man is known by his friends is true, it’s easy to draw conclusions.

The One with the Sea Monster

According to pro-Kremlin outlets, NATO needed a friend recently, too. Several media ran a story about the Scandinavian media trying to make Finns friendlier towards NATO by making them afraid of Russia. The latter had to be successful, as the Finnish Coast Guards allegedly became so schizophrenic that they mistook a Russian yacht for a sea monster. It didn’t take long to prove that the whole story was a distorted spin of a tweet by the Finnish Coast Guard. It’s almost as in ”Friends”, when Phoebe made up the story of a broken left phalange to convince Rachel to get off the plane from Paris. A far-fetched analogy? Yes, just like the disinformation case itself.

The One with All the Other Ones

Does the disinformation and hate speech spiral ever end? Is there a world where pro-Kremlin outlets realise that they’d gone too far? As the search for this answer is easier to find in fiction than in reality, let’s resort to ”Friends” again. One option would be ”The One with All the Haste” scenario, where Monica and Rachel realised that they did go too far with their bet, but only after they had faced its consequences. They were feeling too strong when playing the game against Joey and Chandler; they lost and had to move to the, much less welcoming, boys’ apartment. The difference is, however, that the pro-Kremlin outlets did think about the consequences: driving a wedge between the imaginary ”us and them”, spreading negative emotions (as they are easier amplified) and playing on the divisive issues in European communities, while feeding us made-up and hateful content. But it’s up to us if we let them do that – and to care about the environment where everybody can feel good. Among friends.